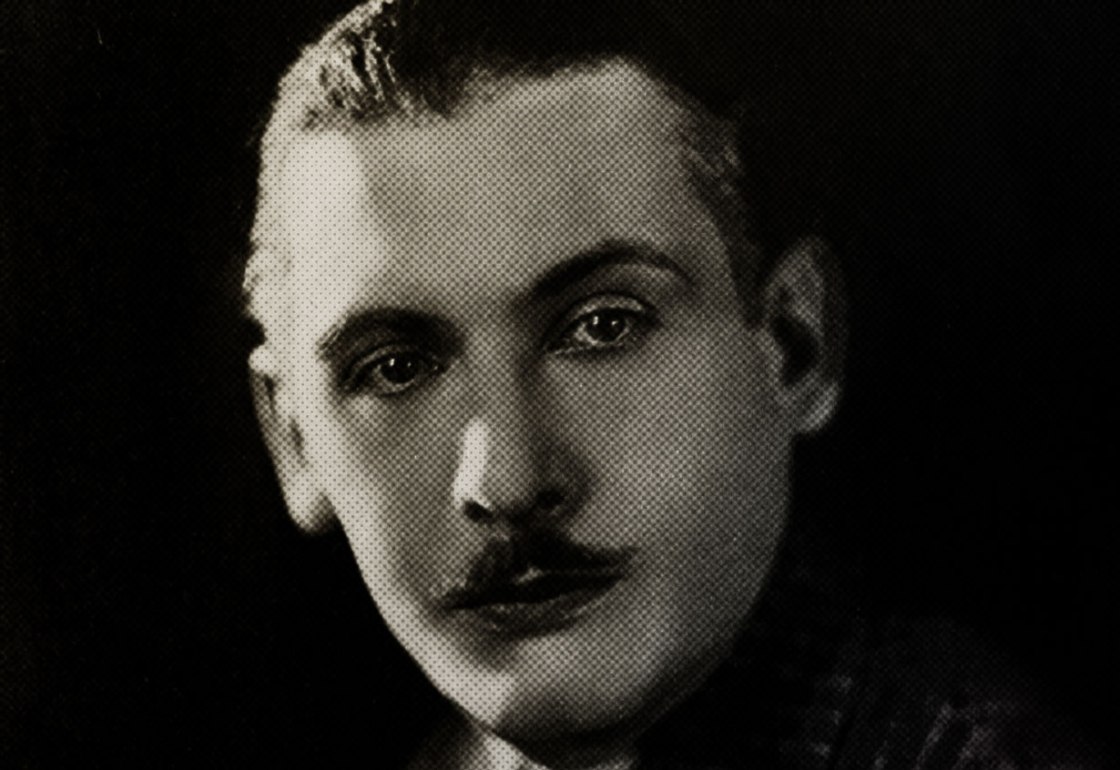 Welcome back! I am cooking my way through the 1929 Photoplay Cookbook and we’re trying something a little different today. It’s not really a recipe so much as a meal plan from an actor who dubbed himself a “Male Vampire” at one point.

(You can catch up on all my taste tests here.)

In addition to being Mr. Mabel Normand and Mr. Dorothy Dalton (twice!), Lew Cody was noted for playing the sort of sleazy playboys who turn out to be awful cads in silent movies. In an infamous Photoplay article, he proclaimed that clever women were ruining romance and nobody wanted them for their brains.

How’d you like to wear your corned beef as a collar, Cody? Hmmph!

Cody’s contribution is a plan for something he calls a Stinkin’ Dinner. After reading it, I was about 90% sure that he meant it as a practical joke on his fans. Check it out:

Okay, Mr. Cody, I’ll bite. I love corned beef, so this isn’t likely to be a total loss no matter what happens with the side dishes.

Corned beef is generally reckoned to be an Irish dish but its roots are actually found in Jewish culinary tradition. While its brogue is not really authentic (it’s an Irish-American/Jewish-American co-production), corned beef is incredibly delicious thanks to that magic combination of salt, herbs and spices.

If you don’t live in an area where corned beef is available, you can always purchase a brisket and brine your own. In fact, I highly recommend that you do this, both the flavor and texture are superior and it is dead simple. I do not use curing salt and so my corned beef is brown instead of the usual pink. I also prefer a dry brine. I have had marriage proposals as a result of this recipe. (You can even buy corned beef spices pre-mixed.)

All this being said, I went ahead and purchased the shockingly pink stuff because it was around St. Patrick’s Day and it was so cheap that it seemed silly not to buy it. (There were no similar bargains in the uncured brisket department.) The difference is flavor is the difference between your delicious homemade waffles and Eggos heated in the toaster but I would never turn down an Eggo.

This isn’t really a recipe so I won’t be going into the complexities of corned beef. Well, not exactly complex, you boil the meat and then boil the veggies in the broth. It takes a few hours but it’s most unattended. Here are instructions if you need them.

The other components in the meal follow the smelly theme. This was a time when Americans dutifully rubbed their salad bowls with garlic, lest the flavor offend when added directly to a dish. Elliott Dexter’s love of the mild green onion is a major factor in his divorce in Don’t Change Your Husband. (Ironically enough, the man Gloria Swanson leaves Dexter for is played by… Lew Cody!) We are dealing with a culture that lived in terror of allium veggies, is my point. There were rebels (my grandmother stuffed whole cloves of garlic into her leg of lamb before roasting, so there) but in general, the good old days were pretty friendly to vampires.

The meal plan also calls for a Bermuda onion in a vinaigrette. Bermuda now relies on tourism instead of onions and so it is not easy to find the variety in supermarkets. I purchased a “sweet onion” from the produce section.

And now we will move onto the cheese. Limburger is a variety that is probably more famous for its use in movieland practical jokes than as an actual part of a meal. My grandparents on both sides of the family were quite fond of it but I had never tasted it myself. The block I purchased was imported from Bavaria but the cheese enjoyed by Cody and his friends would likely have been made in Wisconsin.

Cheese in general, not just Limburger, was another sticky wicket. Elizabeth Gaskell’s 1866 novel Wives and Daughters includes this conversation:

“Papa doesn’t care what he has, if it’s only ready. He would take bread-and-cheese, if cook would only send it in instead of dinner.”

“Yes; he’s very fond of it,” said Molly, innocently. “I’ve known him eat toasted cheese when he has been too tired to fancy anything else.”

“Oh! but, my dear, we must change all that. I shouldn’t like to think of your father eating cheese; it’s such a strong-smelling, coarse kind of thing. We must get him a cook who can toss him up an omelette, or something elegant. Cheese is only fit for the kitchen.”

“Papa is very fond of it,” persevered Molly.

“Oh! but we will cure him of that. I couldn’t bear the smell of cheese; and I’m sure he would be sorry to annoy me.”

Seriously, what DID they eat? I like omelettes as much as the next chick but I don’t see why omelettes and cheese should be mutually exclusive. Invite some onions to the party and we shall have a real treat!

I also purchased a loaf of good pumpernickel (is that more of a black bread?) and the radishes. I skipped turnips because they seemed superfluous together with the potatoes.

Finally, the recipe was published during Prohibition and so it calls for near beer. In modern American terms, this means a beer with no more than 0.05% alcohol. (Most real beers have been 4% and 14% alcohol, though some are stronger or weaker.) I am not a huge beer drinker, especially not with the modern hops-mad microbrewing trend, so I decided that my “near beer” would be Virgil’s Root Beer. Completely legal in any era and darn tasty.

And so I boiled the beef and veggies, sliced the radishes, toasted the bread and laid everything out. How would this dinner turn out? Would it really be a practical joke? 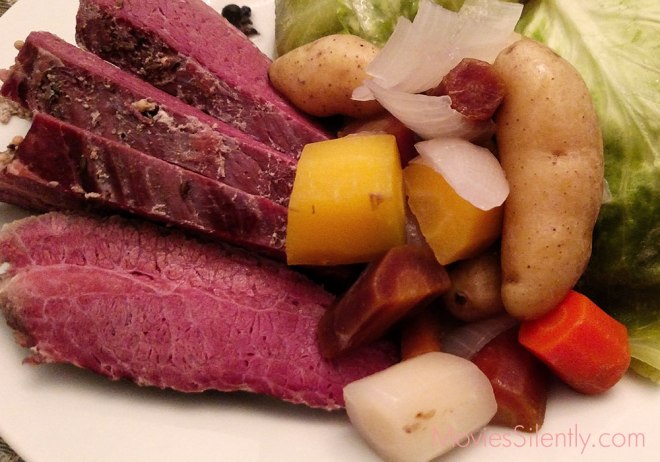 Score: 4 out of 5. Well, that was a treat! As it turned out, all the strong flavors harmonized beautifully and the dinner was quite tasty by modern standards. I already loved corned beef and boiled veggies so let’s move onto the question that I know you all have: How was the Limburger? 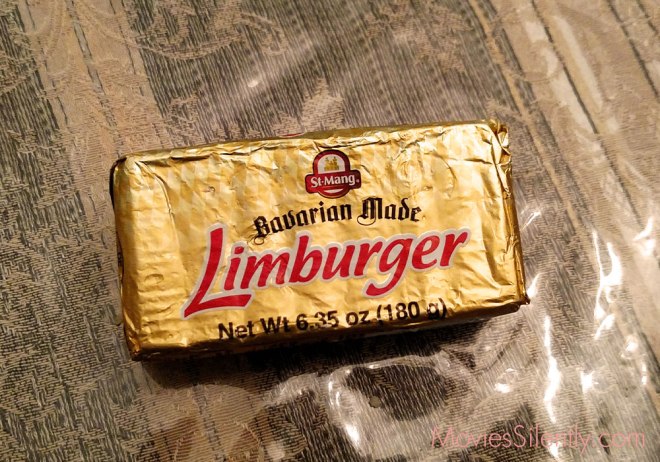 Oh my! What a pack of myths we’ve been handed over the years (melodramatic YouTube videos of people shrieking when offered a slice don’t help). Limburger is definitely a “stinky feet” cheese but hardly the strongest I have ever tasted or smelled. I have some ripe brie in my fridge now that’s smellier.

However, it IS delicious. Nice semi-soft texture with a buttery and nutty flavor. It’s strong enough to compete with the pumpernickel and tastes great with a small pile of the onion salad. (Pumpernickel and onion is the traditional way to enjoy it and I certainly agree that it is a happy combination.) I will definitely be adding Limburger to my eatin’ cheese rotation. I am eager to pair it with other flavors– I am thinking a whole grain flatbread or cracker and some dried fruit or olives– as it really is a beautiful cheese.

Keep in mind that I adore extremely smelly cheese and strong fermented foods, so I am absolutely the target demographic for this product. If you like things on the milder side, it may be a bit much. If you’re somewhere in the middle, give it a shot. It’s not expensive and I think it’s delightful. And YouTubers: Grow up and stop being so melodramatic. I know you need the clickbait but acting like this is radioactive or something is just sad. It’s like somebody running away shrieking from an “attack dog” that’s really a mild-mannered and sleepy Maltese.

In fact, the whole dinner was lovely. Everything is strong and likely would have elicited dirty looks in the 1920s but we aren’t in the 1920s, thank heaven, and we can enjoy our green onions, garlic, smelly cheese and cabbage in public if we want to! I have never been more grateful to live in the modern age. Well, that and when I need vaccines and antibiotics.

If you are vegetarian or vegan but want to have your own stinkin’ dinner, I think a meal of natto and seitan with corned beef spices would be grand. The vegetables and bread can stay as-is, of course.

I thought this was a gag but Lew Cody’s stinkin’ dinner is legit yummy. If you’re like me and enjoy being smacked in the face with flavor, you are going to love this.