Stop me if you’ve heard this one: a pretty shop girl falls in love with the boss but then schemes and circumstances force them apart. Will these crazy kids find love? Clara Bow and Antonio Moreno star in Bow’s signature film.

You’ve got IT and you can keep it.

Who is the newest It Girl? What does it take to be an It Girl? These questions are still being raised in all seriousness (well, as serious as celebrity magazines get) but I can tell you the answer to something they’re not asking: the original and, in my opinion, only It Girl is Clara Bow.

After years toiling in supporting roles and poverty row productions, Bow’s career was catching fire at Paramount. She had scored a hit in Mantrap (1926) and 1927 proved to be her biggest year yet. She was the female lead of Wings and earned her It Girl moniker. It isn’t a great film but it’s a great film for Clara Bow, if you know what I mean. The writing leaves much to be desired but her performance is spot-on.

It was based on Elinor Glyn’s story and everyone had a grand time debating the concept. Obviously, with the word “it” in common use, the movie entitled It and the concept of it, things can get confusing. To sort matters out a little, I will use uppercase IT when referring to the concept described by the film and Glyn’s writings.

Basically, the idea of Glyn’s IT is that whoever possesses the quality is catnip to the opposite sex. One such IT person is Cyrus Waltham (Antonio Moreno), who owns a large department store. His bestie, Monty (William Austin, Alfred in the 1943 Batman serial), thinks he has IT but he actually just has a very good eye for IT. Monty quickly realizes that Betty Lou (Clara Bow), a sales clerk in the store, has IT in spades.

Betty Lou falls for Cyrus the minute she sees him but he can’t give her the time of day. This leaves an opportunity for Monty, who swoops in and asks her out. (Doesn’t the fact that Moreno is completely oblivious to Bow in this early scene completely negate the concept of IT? Sigh. You do see what I mean about this film’s storyline, don’t you?)

Having overheard that Cyrus will be dining at the Ritz, Betty Lou demands a meal at the same location and then trips upstairs to get ready. Her roommate is Molly (Priscilla Bonner), a former co-worker who has not yet recovered from the birth of her baby. The film doesn’t go into specifics but it’s broadly hinted that Molly is a bachelor mother. (Da da DUM!)

Betty Lou hasn’t a thing to wear but quickly snips up a daytime frock, converting it into an evening dress. (Scenes like these make the seamstress in me scream. Where did she get facings for her front? What about fraying?) And that’s that, she’s off to the Ritz.

Monty wants to have fun with the shopgirl but not be seen in public with her. What would the neighbors think? Thing is, nobody puts Betty Lou in the corner and she demands a table at the center of things. The menu is baffling but she solves the problem by ordering whatever Monty has. 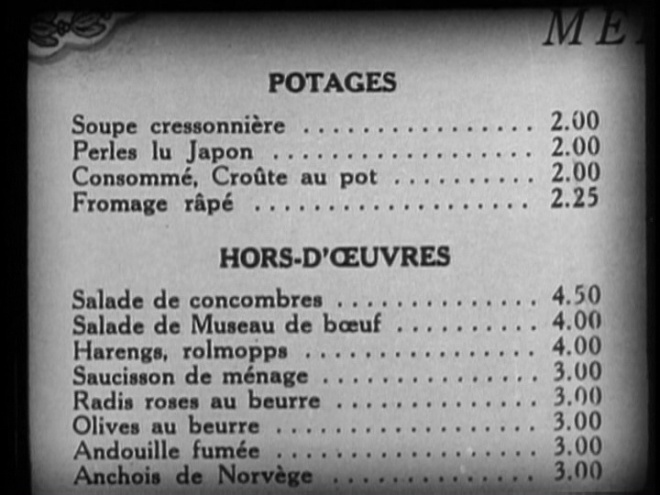 By the way, I crunched the numbers and those 1927 $4.50 dishes would cost about $60 in modern money. The real Ritz Carlton did not publish prices on its menu (I guess if you have to ask, you can’t afford it) and a 1928 menu posted by the New York Public Library includes soup, nuts, olives, celery, a puff pastry fish dish, chicken, cheese, petite sweets and chocolate poached pears. I wouldn’t say no.

Meanwhile, Cyrus is dining with Adela (Jacqueline Gadsdon), his posh almost-fiancée. However, he spots Betty Lou in her finery and can’t keep his eyes off her. The pair hit it off and enjoy a droll date at an amusement park.

But that baby we mentioned earlier? Some do-gooders want to take him from Molly as she is ill and has no visible means of support. (Apparently, staying with one’s roommate doesn’t count.) To save the day, Betty Lou claims the baby is hers, which is overheard by both Monty and a young reporter (Gary Cooper).

The next day, Monty prattles on about a baby not being his, those do-gooders show up in Cyrus’s office and he finally realizes that something is going on. And, naturally, Cyrus greets the idea of Monty dealing with an illegitimate child as a joke but Betty Lou being an unwed mother… OH, THE HUMANITY! Sigh. Um, I believe we covered this in Way Down East and decided that the double standard was ridiculous. Sauce for the goose and whatnot.

Is the romance kaput? Will Betty Lou land the prig of her dreams? See It to find out!

Let’s clear up one little matter before going forward. Elinor Glyn did not invent or coin the use of the term IT. Rudyard Kipling used IT in his short story Mrs. Bathurst, which was published in the Windsor Magazine in 1904, a full two decades before It. The film mimics Kipling’s definition exactly, its main innovation seems to be applying the term equally to men and (rather disturbingly) tying it to mother-son relations. TMI, Elinor, TMI. (Please share if you know of an earlier example of IT in English literature.)

I have absolutely no respect for Elinor Glyn’s literary prowess or her pretentiousness but I must tip my hat to her talents as a marketer. Taking something that everybody knows about and transforming it into the newest fad is no mean feat and Glyn pulls it off with IT. “Sex appeal” is a perfectly serviceable term and it is, after all, what we are discussing but IT makes it all so mysterious.

Essentially, we are dealing with the Starbucks effect. Why order a large ice blended mocha when you can have a venti Frappucino? In the frank and direct 1920s, the frank and direct “sex appeal” did not hold the same fascination as the demure, teasing IT. (Which, when you think about it, does indeed sound very 1904.)

Paramount paid Glyn a fortune for the rights to It and then promptly chucked out most of the story. In his review of the film, Carl Sandburg heartily approved of this approach and quipped that Glyn’s cameo was Paramount’s way of making “reel good” with the author as penance for trashing her work. (I utterly agree with Sandburg’s assessment of the picture, by the way. “The interest of the picture is the bright stimulation of looking at Clara, of laughing at the subtitles, which are funny, and looking at Clara again.”)

As you can probably tell, if you’ve seen any two shopgirl films of the silent era, you’ve already seen It. Frankly, I’m amazed that married screenwriters Hope Loring and Louis D. Lighton didn’t die of boredom while adapting the thing. Other gag-inducing elements include that fawning cameo of Madame Glyn herself and the usual portrayal of our shopgirl’s rival as a total brat. Mordaunt Hall, taking time out of his busy schedule of turning over a paper with “please turn over” written on both sides, states that the plot is an old one. “In fact, although this subject is not annoying, it could never be assured of possessing a fraction of suspense or one iota of subtlety.” He’s not wrong.

However, (and this is a huge however) none of that really matters when Clara Bow gets started. Bow had a natural understanding of the physical communication needed to succeed in silent film and her gestures are fresh and delightful. While there’s nothing wrong with studying theory and planning one’s movements, Bow’s performances show the power of spontaneity.

Director Clarence Badger understood this basic fact about Bow and was happy to simply let her do her thing before the cameras with little interference from him.

Our other IT performer, Antonio Moreno was a veteran of silent pictures since the nickelodeon days and his character calls for more staid behavior. Nonetheless, he does indeed have IT. (Though, perhaps, a bit more sans mustache.) I just wish he and Bow had been given more lighthearted scenes together instead of the film choosing to obsess over the baby subplot.

It is as cliched as they come and relies entirely on its stars for its appeal. Fortunately, Moreno and particularly Bow are up to the task and they easily float above the tropey storyline. Hey, maybe there’s something to that IT thing after all. So, take Carl Sandburg’s advice, look at Clara, laugh at the title cards and look at Clara again. There are certainly worse ways to spend a night at the movies.

The best version of the film is the out-of-print Milestone edition, which features a wonderful Carl Davis score. I have not seen the Mr. Fat-W (?) edition, which is the only in-print version in the U.S. right now.