An Egyptian prince hopes to bring back his lost love under the shadow of the Sphinx. But, as Boris Karloff and Christopher Lee would later discover, there’s always a catch in such a plan.

Stretched out on your grave

When featured in History of Film documentaries, Georges Méliès’s films are often portrayed as light, even cuddly entertainment. A wizard who sent rockets to the moon and featured hand-painted dancers twirling. Many modern viewers, though, are becoming acquainted with the darker, deeper side of Méliès and realizing that there was more to the gentleman than just butterflies and top hats does much to increase respect for his talents.

The Monster lasts just a couple of minutes and seems straightforward on the surface. An Egyptian prince sits and watches while a priest revives a dead body. At first it is just a skeleton but then it is wrapped in fabric and performs a weird dance. Then its body stretches and distorts before it is turned into a beautiful woman. Before the prince can steal a kiss, the priest turns her back into a skeleton.

Méliès had performed the woman-to-skeleton-to-woman trick before and the way the characters are standing, the film is set up as a magic show before an audience. A light, fun film with a bit of macabre. Nice! Okay, nothing more to see here.

Ah! But you know there’s more. So much more.

The Monster has been described as having no plot, a slightly macabre confection designed to entertain us for a few minutes and no more. Or perhaps it is just meant to symbolize frustrated male desire as the man never does get his beautiful living mummy. Chances are if you’ve just seen this film on YouTube, you might be thinking the same thing.

As is often the case in a Méliès film, the real story is deeper. We are fortunate that the filmmaker’s catalogs contained lengthy and detailed descriptions of the plots of his films. You see, many of the films Méliès released were meant to be seen with spoken narration in lieu of the title cards that are synonymous with silent films. (The Flicker Alley release of The Monster contains this narration.) So, watching a Méliès picture silent or with just music does not always provide the whole story and such is the case with The Monster.

Here is the key story detail: the mummy that the prince hopes to revive is that of his own wife. And now the skeleton’s horrifying dance and transformation, the prince’s eagerness to kiss the revitalized young women, his anger at the priest when his wife is snatched away again… it all makes sense. Does the monster of the title refer to the skeleton or to the priest?

The Monster does require a sympathetic audience to appreciate its message but it does hold many fascinating layers for any viewer willing to go that extra mile. As was standard practice in his films, Méliès does not engage in camera trickery of the non-magical variety. While special effects are liberally employed, the camera remains stationary and at a polite “show us their toes” distance. (British films of this period were experimenting with closeups in addition to Méliès-like effects.)

A modern moviegoer may expect closeups in such an emotional tale but, as is always the case in early film, it is best to focus on what the film has rather than what it does not have. The Monster offers a dramatic story and some genuine moments of horror, which is not at all shabby for a few hundred feet of film.

It is also fascinating to study where The Monster stands in relation to other Egyptian-flavored films of the period. To understand this, we need to go back in time to Napoleon’s 1798-1799 Egyptian Campaign. Our intrepid hero decided that the best way to strike back and prevent Great Britain from claiming all of the east was to kill some Egyptians, which he did. It was all fun and games until everybody else in the area got angry and Nelson blew up Napoleon’s ride home.

Morale waning, it looked like Napoleon’s campaign wasn’t going to succeed in checkmating the British at all. Napoleon, a.k.a. the little worm, ended up abandoning 30,000 of his troops in Egypt but only because he was so gosh darn patriotic that he just had to sail back to France to save the day. What a guy!

Even if Napoleon did not succeed in whatever the heck he thought he was doing, there was a revived interest in Egyptian culture in Europe thanks in part to his… again, whatever he thought he was doing. (To borrow a phrase that Will Cuppy applied to Alexander the Great, “Nothing remained of his work except that the people he killed were still dead… Just what this distressing young man thought he was doing, and why, I really can’t say.”) At least the French can be cleared of the charge of shooting off the nose of the Sphinx. Yay?

Anyway, artists catalogued the “discoveries” in Egypt. (No, it does not count that Egyptians already knew about these things. What a ridiculous notion!) Le Description de l’Egypte was published in 1809 and contained elaborate descriptions of ancient Egyptian architecture and the translation of the Rosetta Stone in 1822 further increased the appetite for all things Egyptian without, you know, actual Egyptians.

Interest in Egyptology peaked once again a century later when the tomb of King Tutankhamen was opened in 1923 and cinema couldn’t get enough of mummies and priests and ladies in midriff-baring bralettes. The spectacular failure of the latest Mummy film notwithstanding, we’re sure to see Egypt again in the movies. 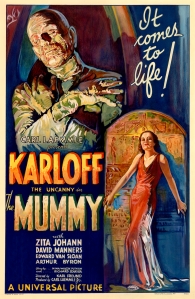 So this was the context in which The Monster was made and I’m sure fans of the original Universal version of The Mummy will notice some parallels with The Monster. A man using mystical powers to revive his lost love is a tantalizing film plot and it also incorporated the stylish Egyptian themes. You see, in addition to being fixated with the art and design of this ancient culture, Europeans and Americans were fascinated by its mysticism.

The term Book of the Dead was coined by Karl Richard Lepsius, a Prussian Egyptologist who published a translation of a book of sacred burial rites and religious beliefs in 1842. Méliès would have likely had at least a passing familiarity with the famous text, though of course The Monster does not aim to replicate Egyptian rites so much as set a general mood of exoticism.

The Monster fits neatly into the European craze for all things Egyptian, as well as the cinematic tradition of trying to recover one’s long-lost love. Echoes of the film can be felt in movies down to this day, even if the filmmakers themselves are unaware of the source.

Released on DVD as part of Flicker Alley’s Méliès box set. I highly recommend viewing the film in this format as you will enjoy the essential narration.