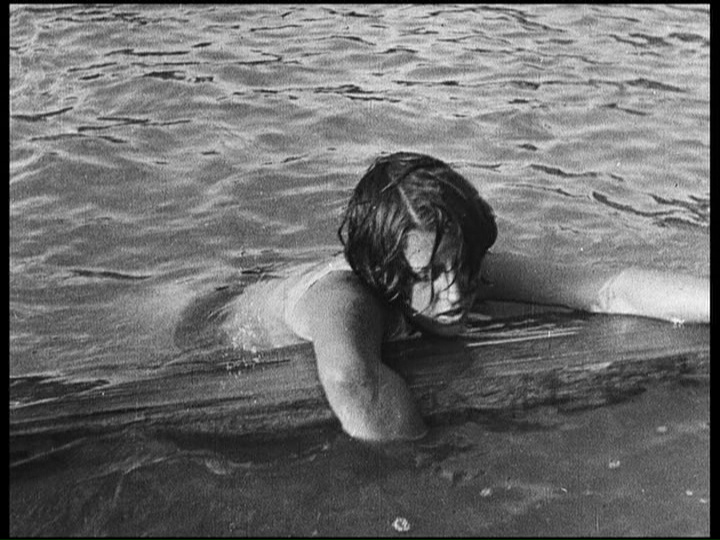 One of the most acclaimed Brazilian films, Limite is true to its title and examines the limits of human existence through the experiences of three people in a lifeboat.

A Lifeboat Built for Three

Before starting this review, I think I should remind you of something: I am a philistine. Self-consciously arty films are absolutely not my thing; they remind me too much of THAT guy in college. You know, the one who wears his cineaste bona fides on his sleeve and sniffs at the unwashed masses and their Star Avengers of the Galaxy III.

I have liked art films but they have had to work that much harder to impress me. They lay claim to a higher sort of filmmaking and so I give no quarter and take no prisoners when I review them. A little oater that just wants to entertain us for five reels? I cut pictures like that a lot of slack. Examining the limits of human existence through stylized flashbacks? Brother, that film had best be prepared to deliver the goods because I will give it hell if it doesn’t.

Limite is an independent film, the only completed cinematic work of director Mario Peixoto (his follow-up effort fell victim to a fire). Peixoto was a devotee of the silent cinema, particularly films from Soviet Russia, but his inspiration for Limite came from a French magazine cover by André Kertész, which showed a woman looking out from behind a man’s cuffed hands. Peixoto became obsessed with the idea of boundaries and limitations (from what I understand, it remained of great interest to him in his other artistic endeavors) and he felt compelled to make a film that would examine this topic.

It is sometimes described as a non-narrative film but Limite is telling a story, it’s just using its own meandering structure. The frame for the film is two women and one man together in a lifeboat in the middle of the ocean. There is not much food and little hope for rescue but for two of the three, hope has long since fled. The first woman, the only one who seems to have some fight left in her, is an escaped prisoner. The second woman is fleeing an unhappy marriage. The man is dealing with the repercussions of his adultery.

Each person on the lifeboat takes a turn telling their story and we flash back to their lives before the fateful sea voyage. These flashbacks take up the bulk of Limite’s two hour running time and they showcase Peixoto’s impressive command of the grammar of silent cinema.

Peixoto was only in his early twenties when he made Limite and, frankly, I was bracing myself for the sort of coarse pretentiousness that is so typical in young filmmakers. Limite has none of it. I was delighted to discover that Peixoto trusts his audience to understand his meaning, his symbols, his non-verbal communication. While he wears his Soviet influence on his sleeve, he still manages to make his own way and create something, gentler, smoother and more melancholy.

Yes, reader, I liked it. Actually, I loved it.

Silent cinema has always been about subtext and coded meaning. Part of this was due to censorship concerns but there was also an art to these hidden messages, a secret communication between the screenwriter and director and the audience. In a silent film, when a woman rubs her sore feet, we know at once that she has a profession, the oldest one, that requires her to walk for blocks. We don’t need it spelled out in purple neon because there is a mutual respect between filmmaker and audience in the best of silent cinema.

Limite’s symbolism strikes a delightful balance by being clear without being deadly obvious. There is nothing worse than an on-the-nose symbol that director feels is witty and subtle. At the same time Limite is reasonably accessible, at least, as accessible as an experimental art film can be. 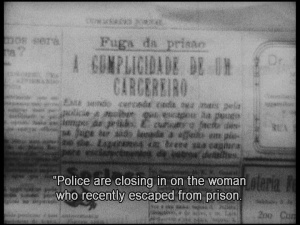 Peixoto only uses written communication twice: once to show a newspaper item about one of the castaways and once using the traditional intertitle method to explain the man’s complex marital issues. I almost regret these scenes as Peixoto was doing such a breathtaking job of creating a purely visual film. (A number of silent era directors disliked title cards and tried to do away with them as much as possible. Limite is the logical continuation of that attitude.)

Peixoto and cinematographer Edgar Brasil make extensive use of a hand-held camera, which gives Limite a modern flavor, and it is used in a way that forced the audience to acknowledge their voyeurism. The camera becomes distracted and has to hurry to catch up with its subject. It peers around corners and from the tops of trees. However, and this is both significant and refreshing, Limite utterly lacks the male gaze. Because of this, women viewing the film can enjoy absorption equal to that of male viewers, which is a rare thing.

If I am vague about particulars, it’s because I feel that this movie is best experienced with as little foreknowledge as possible. Block out two hours of time, relax and let the film come to you. Experienced viewers of silent dramas will find it a particularly rewarding experience.

While it was shot as a silent film, Peixoto put thought into the music that would accompany the picture. His choices reflect his own experiences: much French and Russian classical. The Criterion Collection release that I viewed used recordings from around the period that Limite was shot, which gives the presentation a pleasantly vintage feel.

I should note that like many silent films, Limite has been damaged by time and the elements. There is a brief sequence that is missing entirely and an explanatory card is used to paper over the hole in the narrative. However, I’ve seen worse and considering that this was an independent film with exactly three screenings during its original theatrical run, we’re darn fortunate to have it at all.

The survival of Limite was not just a matter of chance. Over the years, Peixoto acted as an advocate for his own film and did what he could to spread the word beyond Brazil. During the leadup to its premiere, he sent stills to the press claiming they were from a new Vsevolod Pudovkin film. Later, he shared praise for Limite ostensibly written by Sergei Eisenstein but was never able to produce the primary source. But, hey, when you’re an indie filmmaker trying to get some publicity for your baby, a little trickery is pretty much expected. Peixoto’s efforts worked, too. Maybe he didn’t get Eisenstein but he did get Orson Welles and that’s nothing to sneeze at.

In 1966, Limite was impounded by the Brazilian government along with films from Eisenstein and Pudovkin. (I wonder if Peixoto was secretly flattered.) It was finally released and ended up in the hands of Saulo Pereira de Mello, who oversaw the very first restoration of the film in the 1970s. Pereira de Mello first saw the film when he was a physics student; he actually attended the screening because he hoped to date one of the young women in attendance. He never got that date but he did emerge with a lifelong fascination with Limite and became the film’s champion.

For decades, Limite was difficult or impossible to see and, as every silent film fan knows, motion pictures develop reputations when they are unavailable. For example, it would be hopeless to believe that London After Midnight, one of the most sought-after lost silent, to ever live up to the reputation it has built. (I still would love to see it but…) Before seeing Limite, I wondered if it too would be one of those grass-is-greener films, more famous for being unavailable than for actual onscreen accomplishments.

As it turns out, Limites deserves every bit of the accolades heaped on it and more. Highly artistic but strangely accessible, it’s a rare and beautiful example of true silent cinema. Here’s hoping that this new English language release will win it some new fans and admirers.

Recently released on DVD and Bluray in North America by the Criterion Collection as part of the second volume of Martin Scorsese’s World Cinema Project. The box also contains films from the Philippines (Insiang), Thailand (Mysterious Object at Noon), Soviet Kazakhstan (Revenge), Turkey (Law of the Border), and Taiwan (Taipei Story). Limite is the only silent in the bunch but I look forward to seeing more of the set.