Hal Roach’s Rascals opens a hot dog stand outside a race track but the kids are soon enchanted with the idea of organizing their own derby. Soon, the gang has a track set up and a collection of thoroughbreds (a cow, a mule, two dogs, a kitten, a tricycle, etc.) ready to race for the generous $5 purse.

To most modern fans, Our Gang (or The Little Rascals, as they were renamed for television) includes iconic characters like Spanky, Darla and Alfalfa. However, the series had been a hit for years before these popular cast members were born. Derby Day is from the Our Gang series’ second year of production (they was also called Hal Roach’s Rascals) and it follows a format that should be familiar to anyone who has seen the shorts. The gang sees an adult activity and tries to recreate it as best they can. Hilarity ensues. In this case, the kids decide to replicate a horse race.

The short opens with the gang involved in quite a different business. With a loan of fifty cents, they have opened up a hot dog and lemonade stand opposite a race track. (Everything costs a nickel, about 75 cents in modern cash. Not bad.) Mary (Mary Kornman) is the ex-fiancée (wink, wink) of Mickie (Mickey Daniels), the brains of the hot dog corporation. Her father is a racetrack lizard and she uses her connections to sneak the entire gang inside. Once in, Mickie gets an idea. Uh oh.

Soon, the kids have constructed their own race track—complete with betting booths—and are ready to hold a derby. Things get serious when Mary’s father comes through with a purse: a five dollar bill! (Don’t laugh, that’s over $70 in today’s money. A fortune for any kid.) Suddenly, winning is no laughing matter.

The kids choose their chariots and it is an eclectic mix. Mickie has rigged up a cart run on dog and kitten power, Ernie (Morrison) grabs a mule, Joe (Cobb) takes his chances on a cow, Jackie (Condon) opts for another dog and little Farina (Allen Hoskins) can only muster up a tricycle. With his odds of winning placed at 1,000 to 1, Farina helps himself along by pouring a bottle of alcohol into the bucket that the “thoroughbreds” are drinking from.

Of course, the race is a chaotic mess and nothing goes as it should but to say more would be telling. (After all, it is the climax of the short.)

Derby Day has a bit of a slow start with its hot dog stand antics; they’re not bad but they pale in comparison to the racing shenanigans that the kids engage in later. Director Robert F. McGowan, who had been with the Our Gang series since the beginning, may not have had the pacing down pat but he could certainly draw charming and natural performances out of his young cast. The short is further enhanced by the witty title cards of H.M. “Beanie” Walker, the resident intertitle artist of the Hal Roach lot. A sample: 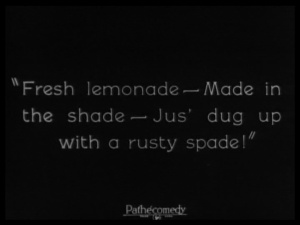 I’m more familiar with the sound shorts in the series but I will say that the standouts for me were Ernie Morrison, Allen Hoskins, Micky Daniels and Mary Kornman. They come off as the most natural and charming of the kids, though I certainly would not object to anyone having other favorites. They’re an adorable lot, with one exception. The dud is Sing Joy (Sonny Boy Warde), a yellowface character with no discernible personality. Fortunately, his character was short-lived in the series.

Any short with “rascals” above the title will include mischief and there’s plenty to be had here. Mickie borrows his mother’s shirtwaists to serve as silks for the jockeys. (He advises his friends that if they must tear something, let it be their pants.) Before that, the boys try to sell lemonade that their pup had paddled in, sneak into the racetrack and set up an illegal gambling operation. Well, you can’t accuse them of doing things by halves. Mary, the lone girl lead, is no slouch as she aids and abets her friends in their life of monkey business. Fans wouldn’t have it any other way.

One of the major goals of the Our Gang series was to act as counterprogramming opposite the over-rehearsed child stars that were common in the silent and classic film eras. Indeed, much of the charm of the series can be found in the obviously unscripted moments. Little Allen Hoskins had just turned three when Derby Day was released and his adorable toddler awkwardness is worth a dozen slick production numbers.

(As with any innovation, there is some debate as to just who invented what in the Our Gang series. What is not debated is that Hal Roach, McGowan and Charley Chase were all instrumental in getting the series off the ground. I’ll just leave it at that.)

The two main flaws of this short are its comparatively slow start and its unfortunate reliance on stereotype gags despite the positive portrayal of an integrated cast of characters. (Before anyone starts up about context, I strongly suggest reading up on the hot debate over race and comedy that was raging among African-American filmmakers, authors and political figures during the silent era.)

Derby Day should be familiar territory for Our Gang fans but that’s more of a feature than a bug. The kids are cute, the animals are cute and the derby at the short’s climax makes it all worth it. Fans of the sound series might have a learning curve due to the entirely different cast but they should find plenty to enjoy. Just be prepared for a more leisurely setup.

Derby Day has been released on DVD by ReelclassicDVD.com with a delightful piano score by Ben Model.