Unboxing the Silents by Movies SilentlyFebruary 2, 2017

Kino Lorber and Lobster Films collaborated to release Buster Keaton’s restored shorts last year and they are now launching Keaton features into the region 1/A market. We’re going to take a closer look.

As always, a huge thanks to the folks at Kino for providing review copy.

First a couple of things to clear up. Yes, these films were previously released on Blu by Kino but, alas, I cannot offer a comparison as I only have the older Kino DVDs. You know, the ones with the neon covers. So, I will be reviewing these films as a silent film fan who has just upgraded her Keaton collection, which is exactly what I am.

VERY IMPORTANT: These films are not two-per-disc. Each Bluray is a two-disc set. This means that picture quality was not sacrificed in an attempt to cram two features onto a single Bluray. (I’ll be covering the release of Steamboat Bill, Jr. and College disc next week.)

Here are some Bluray screencaps for your inspection. Looks pretty good to me! (I cropped out the pillarboxes on the sides of the screencaps for better presentation.) 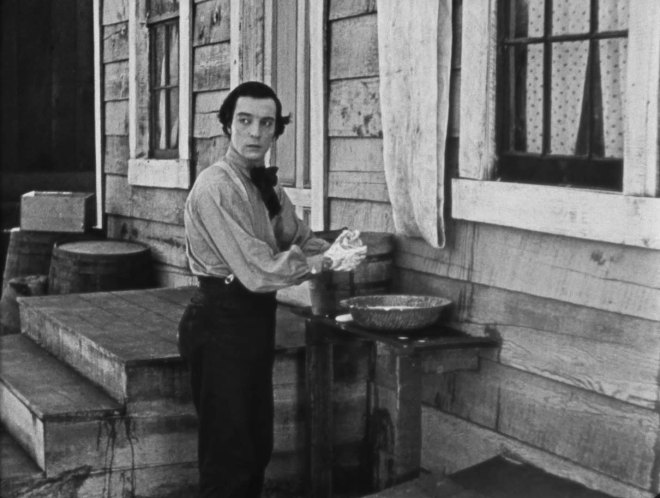 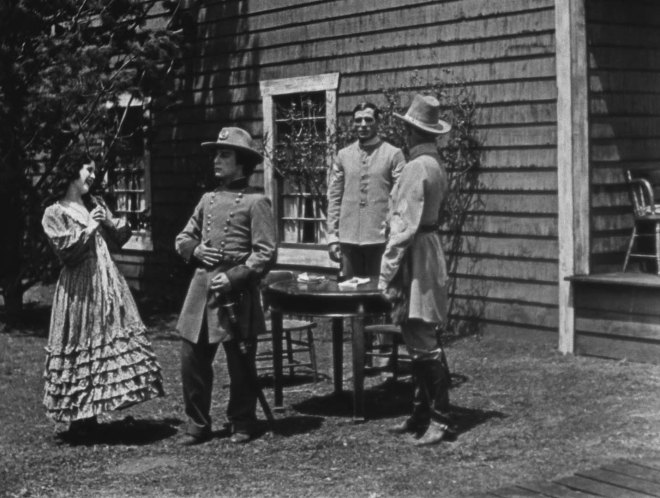 I finally noticed that the titles in The General have a wood background, which is kinda cool. 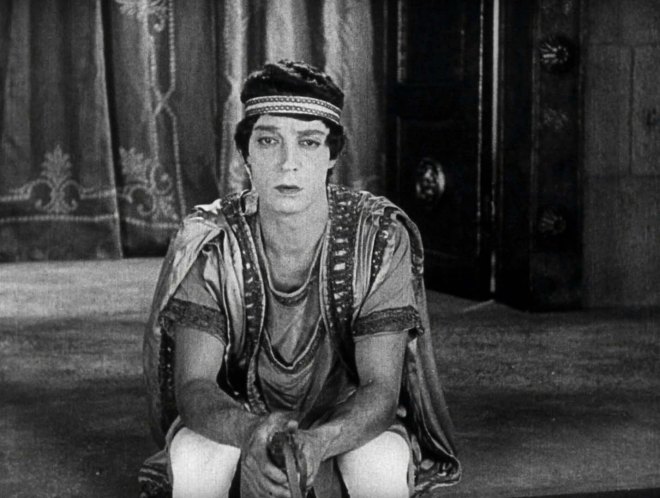 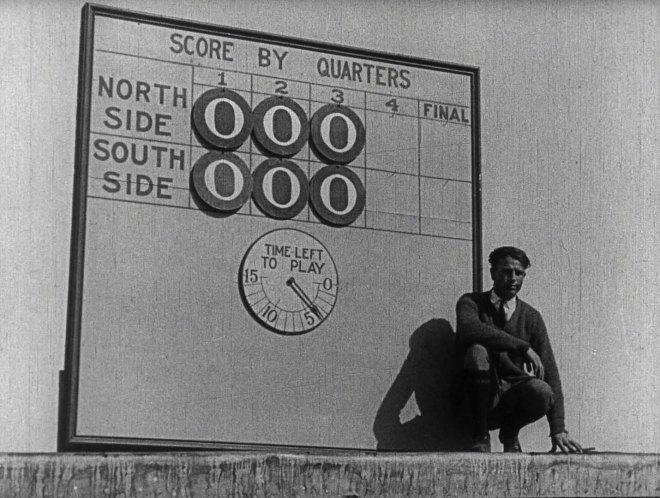 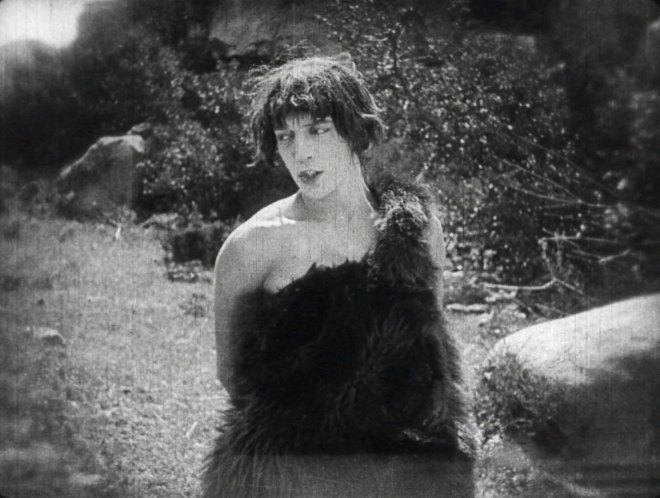 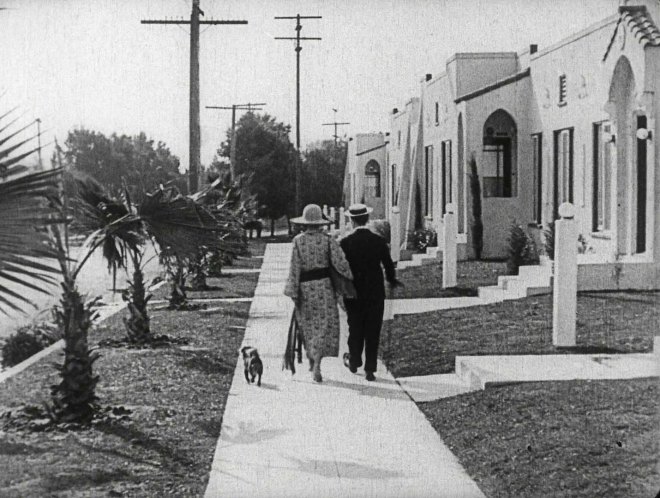 By the way, another review mentioned that this is the European print of Three Ages, so there will be subtle differences from the American release. Not new footage but slightly different takes, the differences should be pretty subtle. Casual viewers will likely never notice but film nerds will want to be made aware of this fact. (The topic of American vs. European release prints takes a while to discuss and is a conversation for another day.)

We get our choice of orchestral scores, Robert Israel’s is lush and romantic (his trademark, really) while Joe Hisaishi’s is a bit more on the playful side. Both are excellent, though I think I slightly prefer the Hisaishi score. There are worse problems in the world than having to choose between lovely orchestral scores, eh?

We get our choice of chamber scores, the Mont Alto Motion Picture Orchestra and Robert Israel. Both are very traditional and romantic. Once again, absolutely no complaints from me, though I think I slightly prefer the Israel score.

We get an audio commentary by film historians Michael Schlesinger and Stan Taffel, vintage intros by Orson Welles (12 minutes with clips of Keaton’s short film days) and Gloria Swanson (2 minutes, no clips but a glorious outfit) and an 11-minute short about the restoration of the General (locomotive, not film).

We get a vintage Alka-Seltzer commercial starring Keaton and a terrifying anthropomorphic plop-plop-fizz-fizz tablet and a 6-minute Candid Camera segment in which Keaton baffles customers at a diner counter. (Is this where I insert a remark about the innocent, gentle early days of reality television?)

We also get an excerpt (not sure how much was left out) of D.W. Griffith’s 1912 caveman melodrama, Man’s Genesis. It’s all very goofy, as caveman melodramas are wont to be, but the Biograph team gamely caper and prance about in what look like very itchy grass and fur costumes. Robert Harron is Weakhands, who has to learn to kill a lunk named Bruteforce in order to win the love of Mae Marsh’s character, who is named Lilywhite because Griffith had certain… issues. (And by “issues” I mean he was a flaming racist.) In any case, Griffith’s Biograph shorts are pretty rare in HD and it’s nice to see this film on Bluray. It comes with a good piano score from Ben Model. (This extra was also included on the 2010 Kino Bluray.)

One can easily imagine a young Keaton finding endless comedic possibilities with such a setup. Charlie Chaplin and the Keystone crew certainly did with His Prehistoric Past.

Fun Fact: Three Ages may have been responsible for Cecil B. DeMille quirktastic marital comedy, Adam’s Rib, disappointing at the box office. The DeMille picture featured a dramatic caveman fantasy sequence in which Milton Sills clubs Anna Q. Nilsson to death (it’s a long story). Three Ages opened the same day and one can imagine that the sight of Buster’s caveman garb did not help anyone take an already bonkers sequence seriously.

However, Adam’s Rib did influence another famous film. No, not the Hepburn-Tracy Adam’s Rib, it’s Bringing Up Baby! DeMille’s picture features a grumpy, bespectacled paleontologist who falls for a quirky chick who won’t leave him alone. Where have we heard this before? And did I mention that Howard Hawks was DeMille’s assistant at the time?

And that’s your zany film history for the day, kids!

Is this set worth buying? While the special features are nice and I love the music, I think owners of the previous Kino Blurays will want to look carefully before deciding. However, if you missed the last Bluray go-round and are looking to upgrade from DVD or (gasp!) VHS, I definitely recommend this set. The films are a bargain at the price and the extras are quite nice, particularly the selection of music scores.

Availability: You can pre-order a copy here.