The Man and the Moment (1929) A Part-Talkie Review

Rod La Rocque is a playboy who falls for a winsome aviatrix (Billie Dove) in this part-talkie romantic comedy. Based on a story by Elinor Glyn, the film gives us a contract marriage, a saucy dance sequence with a giant swimming tank on the ballroom floor and some very wild flying. Roaring twenties indeed.

May I have a word?

By 1929, it was obvious that sound had come to stay and most major studio pictures tried to jump on the talkie train. This gave rise to a very odd sort of picture, the part-talkie. Basically, it is a silent film with a certain number of sequences that switch over to full sound and then back to silence again. It was a good short-term solution because the film could be advertised as a sound picture but it did not do much for longevity. Like so many compromises, part-talkies are not going to please anyone. The silent sequences made re-release challenging (see my She Goes to War review for an example) and most part-talkies are wiling away in vaults, assuming they survive at all.

(By the way, silent films that had sound sequences grafted on after the picture had wrapped– sometimes years after the fact– were called “goat glands.” According to The Talkies: American Cinema’s Transition to Sound by Donald Crafton, this odd term was in reference to a snake oil impotence cure. The 1925 version of The Phantom of the Opera was one of the most famous pictures to receive the goat gland treatment.)

The Man and the Moment was thought lost for years before being recovered and reunited with its Vitaphone discs. You see, any early sound films stored their soundtrack on phonograph records. This means that sometimes everything survives but other times we are left with movies sans soundtrack and soundtracks sans movies.

The film boasts an impressive pedigree even without its lost-and-found story. It’s based on a story by Elinor Glyn, an author of meager talent but enormous marketing skill. The story was adapted for the screen by Agnes Christine Johnston, a talented veteran who penned Show People. George Fitzmaurice, who showed a flair for elaborate romantic fantasy with Son of the Sheik, directs the thing.

Michael Towne (Rod La Rocque) is a roguish playboy who spends his days throwing wild parties on his yacht. He made the mistake of writing when he should have telephoned and now the vampish Viola Hatfield (Gwen Lee) has enough blackmail to force him to marry her. Once she divorces her current husband, that is.

But then, wouldn’t you know it, naïve heiress Joan Winslow (Billie Dove) crashes her airplane into Michael’s speedboat. He is immediately taken with her but she thinks he’s a cad and a dolt. She is quite right but she also has bigger problems than Michael. Her guardian (Charles Sellon) is not a very nice man and he means to send Joan back home to Iowa. (The horror!)

Meanwhile, Viola has sprung her trap and tells Michael that he must marry her once her divorce comes through—or else. Upon hearing Joan’s plight, Michael proposes a plan: They will get married in name only, which will give Joan her independence and rid Michael of Viola. Nothing physical, of course, just the license to protect them both. Joan hesitates but Michael finally manages to push her into it.

They are married on Michael’s yacht and Joan means to leave after the ceremony but Michael guilts her into staying for dinner. Then we get double exposure doves and Hawaiian music with a double exposure band. It’s weird. And then we get a No! No! Yes! wedding night seduction scene and is it ever squicky. Consent is dubious (if not downright doubtful) and Joan is so eager to escape the next morning that she swims ashore in her negligee.

Viola’s brother Skippy (Robert Schable) spots Joan, recognizes her and offers to drive her home. Of course, being driven home soaking wet and dressed in a negligee after being out all night is not exactly the best look for meeting a conservative guardian. He throws Joan out of the house before she can explain that she is married. Skippy senses an opportunity to help his sister by keeping a rival for Michael’s affections out of the way and so he invites Joan to stay at his sister’s house until her guardian calms down.

Meanwhile, Michael is looking for his runaway bride. He gives a rather lame apology and then tries to play the husband guard but Joan is having none of it, nor should she. And so the rest of the film is taken up with Michael trying to play lord and master with his unwilling wife and his attempts to persuade her to forgive him. I was shouting, “Annulment! Annulment!” at the screen but did anyone listen to me? They did not.

The plot of the picture comes down to this: Boy meets girl, boy talks girl into marrying him in name only, boy then performs a very squicky seduction that borders on assault, girl flees, boy spends the rest of the movie stalking her and trying to win her back. Oh dear. Elinor Glyn strikes again. Sigh. (The only Hollywood authoress I have less respect for is Anita Loos.) But Agnes Christine Johnston? Author of the delightful Show People? I am horrified!

Oh and then we get this exchange. Michael tricks Joan into seeing him by posing as her guardian and… 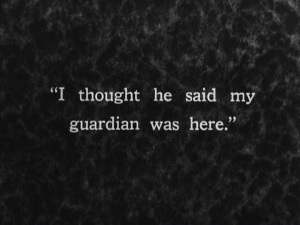 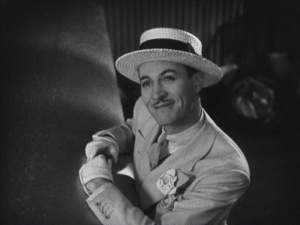 Michael’s behavior becomes steadily more deranged as the film continues. He smashes a huge water tank with a chair, causing glass and water to flood into a ballroom. Oh, and Joan, who was swimming in said tank. Then he stows away on Joan’s plane and tries to force her to kiss him in midair, causing a crash. Good lord, this thing is going to end in a murder-suicide, I know it is.

Joan does get some of her own back by using her airplane’s engine to blow Michael into the water but for the most part, the screenplay conspires against her. Why can’t she stop being such a resentful witch and go off with that nice Michael? So he lies constantly, does not respect Joan’s autonomy and keeps a collection of Viola’s lingerie in the guest room. That doesn’t mean he’s a bad husband!

The sound sequences are, thankfully, absent from the yuckier scenes and are confined to the second and final reels. Since the recovered print was silent, the sound sequences play over intertitles to keep the film in sync. I know there are some complaints about this but it’s not too distracting. In fact, my main issues with these scenes come from the sound and not the silence.

Some of the gags would obviously have worked better in intertitles than spoken. For example, Michael hangs up on Joan and she delivers this line:

Much, much better in print.

Gwen Lee and Billie Dove take very well to sound but La Rocque clearly struggles. His voice is fine but his delivery is stiff and halting. (He picked up the pace slightly in later talkies but was never particularly natural, in my opinion.) And no crack against the Midwest but La Rocque’s Illinois patois just doesn’t suit his exotic name, looks and screen character. It’s like finding out Rudolph Valentino has a Cleveland accent. One does not want one’s Latin Lover sounding like Jiminy Cricket. (Compare La Rocque’s screen persona with fellow Midwesterners Henry Fonda and Jimmy Stewart. See what I mean? And by the way, Gwen Lee was born in Nebraska but puts on a vampy purr for the role. It suits her.)

In the plus column, the score is actually pretty darn good. I am not the biggest fan of period synchronized scores in general, finding them overly jaunty at inappropriate moments. This one is suitably romantic but doesn’t drown the picture and I liked the little Hawaiian musical interlude, silly though the imagery is.

While it’s interesting to hear the voices and experience a part-talkie, I do wish we had the option of seeing the 100% silent version. I think the picture would be more enjoyable (slightly) as a silent film, possibly with a modern score. As it is, this film is more of a novelty than anything.

However, no amount of novelty or good music can make up for the ickiness of the story and the shabby way both hero and script treat the heroine. I don’t see all that much to recommend The Man and the Moment unless you are a diehard Billie Dove fan or a talkie transition nerd. All others can safely skip this picture.

The Man and the Moment has been released on DVD by Warner Archive.