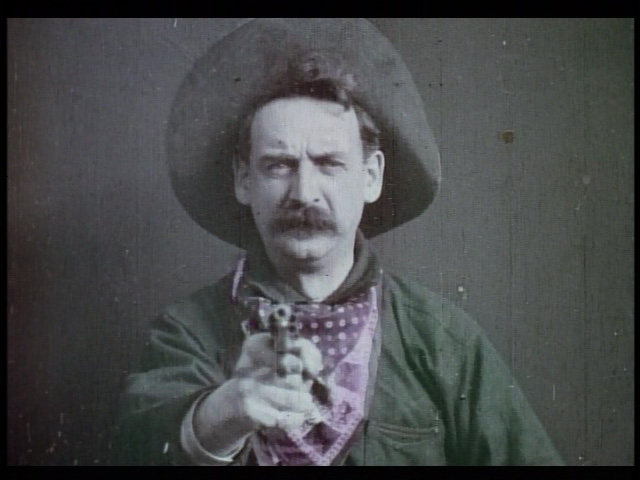 There was this train robbery… and it was great!

Seriously, this film is often listed as the first movie with a plot or the first movie, period, neither of which isn’t true at all. The Great Train Robbery‘s real claim to fame is as one of the first American blockbusters.

It’s historically important, sure, but also fun to watch. Edwin S. Porter keeps his performers and plot moving at a furious pace and the famous close-up of actor Justus T. Barnes (as fine a cowboy name as you’ll ever see) is a dramatic glimpse at the future of movies. A must-see.

The bandits are chased down by the posse. That’ll learn ’em!

If it were a dessert it would be: Stained Glass Cake. A little gaudy, a little wacky, a little old-fashioned, a lot fun.

Availability: This film is in the public domain but if you want a quality viewing experience, do seek out a proper release. If you have the spondoolicks, grab yourself a copy of Kino Lorber’s glorious Edison: The Invention of the Movies box set, which follows the historic Edison studio from the days of Black Maria all the way to its final features. If you’re on more of a budget, Flicker Alley has reissued the first volume of Landmarks of Early Film, which is essentially a greatest hits album for early cinema from the Muybridge experiments to the height of the nickelodeon era.