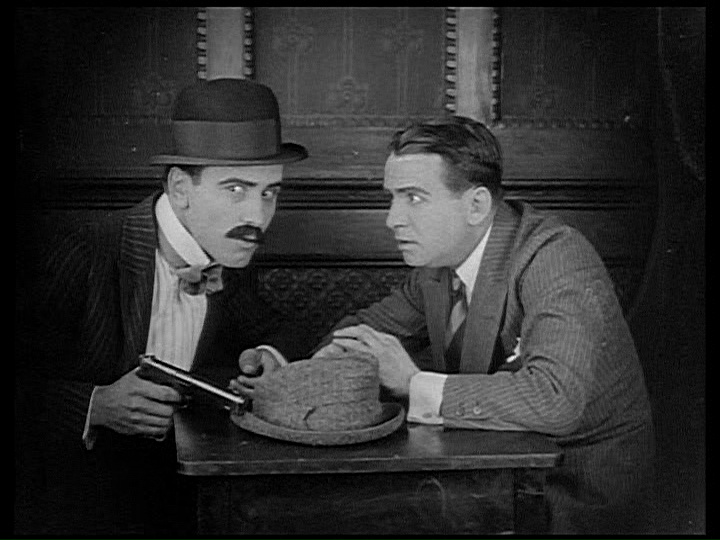 Douglas Fairbanks plays an artist with more enthusiasm than talent and more charm than cash. When the love of his life dumps him for another, he feels he has nothing left to live for and so he hires the best assassin in New York, Automatic Joe, to help him end it all. But then Doug changes his mind and that’s where the trouble begins.

Hello, will you please kill me?

Douglas Fairbanks is justly famous for his quality swashbucklers but his modern comedies of the ‘teens are well worth your time and attention. Fairbanks played hyperactive young fellows who always managed to get themselves into nutty scrapes. Not to worry, though, the Fairbanks athleticism would save the day with leaps and jumps and races across rooftops.

It’s hard to choose a favorite from among these amusing movies but if you really pressed me, I would have to name Flirting with Fate. Fairbanks is charming, of course, but what really puts it over is a delightfully sick plot and a talented co-star.

Fairbanks stars as Augy, a young fellow who has given himself over to his art. He is so successful that he is about to be evicted for not paying his rent. His wealthy friend, Harry Hansum (W.E. Lawrence) stops by for a visit and sees that Augy has finally painted something spectacular, a portrait of a lady. The model is a socialite named Gladys (Jewel Carmen) and Harry offers to introduce Augy to her, which sends our hero over the moon.

Alas, Gladys likes Augy but she has a stinker of a would be fiancé who is being pushed by her snobby aunt. Augy’s only ally is Phyllis (Dorothy Haydel), Gladys’s best friend. Augy is determined to be insufficiently wealthy and is shown the door.

At this point, I am sorry to say that the film drags. Fairbanks does his best but Gladys just isn’t interesting enough to warrant all this fuss and one begins to wonder if Augy wouldn’t be better off just dating Phyllis instead. Don’t lose hope, though, because around the halfway mark, the film kicks into high gear.

You see, Augy’s life falls apart. A wealthy couple offers to buy his portrait of Gladys and they are willing to pay a handsome price. Augy refuses but a ne’er-do-well overhears the conversation and steals the painting. Then Augy tries to propose to Gladys but he is so nervous that he practices on Phyllis first. Gladys sees this, assumes Augy is untrue and runs back to her stinker fiancé. Augy returns to his apartment, gets a note from Harry saying that he can’t lend him the rent money after all and discovers that his painting has been stolen. With his life in shambles and nothing left to live for, Augy decides to end it all. He puts out his dogs and turns on the gas.

Half an hour later, the very much alive Augy realizes that he is on a pre-pay, coin-operated gas meter and he didn’t have enough gas left to properly do the job. The meter only takes quarters and Augie has dimes so he goes down to the bar to get some change. There’s a tough looking character hanging around, Automatic Joe (George Beranger), named for his favorite kind of pistol. An assassin by trade and by preference, Joe is said to kill men for merely bumping into him. Light bulb!

Augy bumps into Automatic Joe and prepares himself for death but Joe turns out to be a rather nice man, for an assassin. He assumes that Augy is ill and is not at all angry about the bump. His plan foiled, Augy decides to come clean. He tells Joe that he wants to hire him to kill… him. Joe finds the request quite amusing and offers Augy a menu of assassination methods to choose from. He can poison, strangle, blow up, shoot… Augy says that all he cares about is that he doesn’t see it coming. Joe takes Augy’s money, writes out a receipt and promises a surprising death. 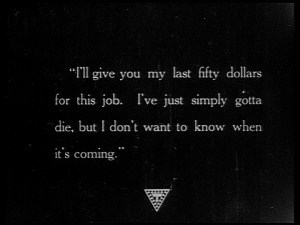 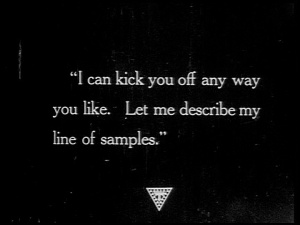 I’ve seen George Beranger in other films but he never made a particular impression. This picture, though, is a case of the right actor meeting the right part. From the moment he appears on the screen, Automatic Joe steals the show. Beranger understands that he is playing in a broad farce and his performance reflects this understanding. It’s a self-aware, winking kind of thing with Beranger breaking the fourth wall and merrily killing his victims left and right in zany fantasy sequences.

With Automatic Joe on the case, Augy can relax and wait for the end. He returns to his apartment and discovers that his painting has been recovered, Harry has sent him a check, his step-mother died and left him a fortune and Phyllis has explained all to Gladys, who is now ready to accept Augy’s love.

This is wonderful news! But what about Automatic Joe? Augy has no way to contact him to call off the hit!

But killing is the last thing on Joe’s mind. He has gone to the deathbed of his mother, whose last request was for her son to give up his unsavory profession and attend Salvation Army services.

Will Joe convert? Will Augy survive? Will we get to see the patented Douglas Fairbanks leaps and jumps? You’ll have to watch Flirting with Fate to find out!

The film has a slow start but at the halfway mark, it turns into a mad chase comedy. With George Beranger’s excellent performance and Fairbanks finally unleashing his athletic skills, the last half-hour is one for the record books. (The film only runs about an hour.)

As stated above, this picture is a mad bit of comedy and director Christy Cabanne leaves no comedy devices on the table. We get punny title cards (much is made of the hero’s full name, August) and characters breaking the fourth wall and outrageous fantasy sequences and Automatic Joe pulling a gun on the Salvation Army. Coat all this in a thick layer of black comedy and you have some timeless humor.

(Here are a few of those wacky title cards.) 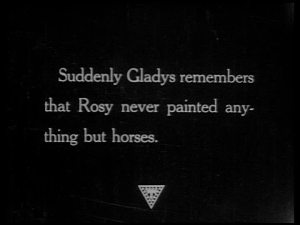 Regarding the central plot, the screenwriters were possibly inspired by the Jules Verne novel Tribulations of a Chinaman in China (1879) and good for them as the idea of a man hiring an assassin for his suicide is comedy gold. The plot device is so good, in fact, that it has been employed numerous times since. It was used in Germany (Der Mann, der seinen Mörder sucht, 1931), it was used in France (Up to His Ears, 1965), it was used in a Finnish-British-German-Swedish co-production (I Hired a Contract Killer, 1990), it was used in an American political satire (Bulworth, 1998). It was used as the plot of a droll Czech comedy (Shut Up and Shoot Me, 2005) in which the target and assassin end up accidentally killing everyone except the guy who wants to die. It was even used in an episode of Star Trek: Deep Space Nine, complete with the assassin offering a menu of murder methods for his employer/victim to choose from. (The episode is Body Parts, if you’re interested.) For versatility and longevity, I dare you to name a plot device that has done better for itself.

The one weak spot in the film is its leading lady. Nowadays, if Jewel Carmen is mentioned at all, it is either in connection with the death of Thelma Todd or as the namesake of the Joyita, a ship from which 25 passengers and crew disappeared without a trace. Carmen’s real life is several times more interesting than her onscreen persona, which, from what I have seen, consisted of standing around and looking sort of blankly pretty.

You can also see her in The Bat, directed by her husband, Roland West, co-starring Jack Pickford and featuring Beranger in a small part. In that film, she is… blankly pretty. I sense a pattern. The problem is that for Augy’s suicidal tendencies to be believable, the woman he has loved and lost must be wondrous. Carmen is just kind of okay.

The films two big flaws—slow beginning and bland leading lady—are more than made up for by its rollicking second half and irreverent tone. Fairbanks is having a ball, Beranger is a delight and the result is one of the lightest, cutest black comedies you’ve ever seen. It’s an ideal introduction to modern Fairbanks if you have only seen his costumed swashbuckler stuff and it’s just an all-around fun movie. Highly recommended.

Flirting with Fate is available as part of Flicker Alley’s Douglas Fairbanks: A Modern Musketeer box set. It’s an investment but you get 11 Fairbanks pictures, including the most gorgeous transfer of The Mark of Zorro currently available. Flirting with Fate is accompanied by a delightful piano score from Philip Carli. (The film is available individually as a bargain release but I urge you to avoid it as it will likely be a low quality transfer with a canned score. False economy.)