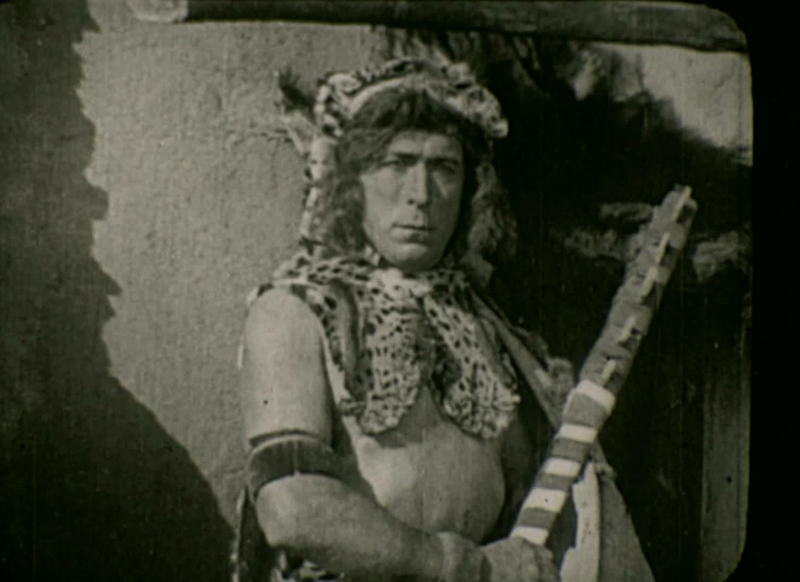 William S. Hart plays a native Mesoamerican who falls for an Aztec princess. This goes over about as well as you can imagine and our hero soon finds himself marked for sacrifice. A change of pace (obviously) for western star Hart.

Cut to the Hart

Actors get bored. You can’t blame them. Getting typecast into a particular kind of role has got to be a little bit tedious. Even if the performer enjoys the genre in which they work, there is a temptation to break out once in a while. And that’s where the trouble begins.

Sure, there have been actors like Fred MacMurray who managed to play roles wildly outside their area of specialty but usually the results are more like The Captive God. William S. Hart was known as the Good Bad Man of the movies. He specialized in playing western antiheroes who would teeter on the edge of villainy and sometimes fall in. Hart was a devotee of the American west but I imagine even he was getting a little drained by the constant succession of hell-for-leather chases on horseback and brutal gunfights. And so in 1916, producer Thomas Ince gave Hart a budget of $50,000 (typical Hart films were more in the $15,000-30,000 range) and had him try something in an entirely new direction.

When one thinks of settings for Hollywood films, pre-Columbian civilizations of Mesoamerica do not come immediately to mind but there was actually a bit of interest in the Aztecs in general and Montezuma in particular in the mid-1910s. Cecil B. DeMille directed Geraldine Farrar and Wallace Reid in the 1917 Aztec film The Woman God Forgot, which was released a year after The Captive God. Both films concerned the love of Montezuma’s daughter and the bloody consequences of her romance with an enemy.

By the way, while Moctezuma is now considered to be the more correct rendering of the Aztec ruler’s name for English speakers, the films use the then-correct spelling Montezuma and I will be using this spelling in the review to reduce confusion. Also, the version of the film that I saw was abridged for the home media market and the characters were completely renamed. I will be using the original character names, as listed in the AFI catalog. I wish I could say I had a scholarly reason for this but the fact is, the reissue names are hilarious and I need to get through this review without giggling too much. Princess Tacki and her loyal friend Cassio? Oh my goodness! 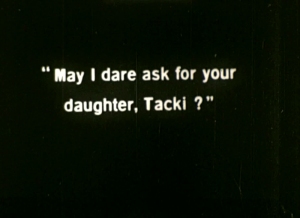 Chiapa (William S. Hart) is the leader of the Tehuan but things have not been going so well. The Aztec have been winning battles and Montezuma (Robert McKim) has grown increasingly bold. While spying on the enemy, Chiapa is wounded but he is rescued by Lolomi (Enid Markey), Montezuma’s daughter. Our hero is discovered and marked for sacrifice. It’s up to Lolomi to save the day before the film turns into William S. Hart and the Temple of Doom.

For easy reference, here are the original names compared to what they were changed to in the retitle:

The film was praised upon its initial release for its setting and epic battles but its story was and is on the pulpy side. Hollywood has always had an unfortunate tendency to simplify complicated conflicts into “he just wanted to date his enemy’s daughter” which rather limits the emotional stakes for the picture.

Hart had been the first Massala in the stage version of Ben-Hur and so he had some experience dashing about in a short skirt but you wouldn’t know it from this film. He looks… unhappy in his part, someone who has just realized that the idea was fine on paper but not so good in execution. There’s no smolder to his performance, no sign of that glaring killer we all know and love.

Hart’s lack of confidence seems to have rubbed off on most everyone else (Charles Swickard’s pedestrian direction does not help) and the other men in the cast seem chagrined at the story and setting. The ladies do a bit better, particularly leading lady Enid Markey. Markey had co-starred with Hart in The Taking of Luke McVane and she would go on to be Tarzan’s very first Jane. In this picture, she has the standard lovely princess role but she plays it well and does not seem bothered by the enormous headdresses. But considering the massive size women’s hats of the 1910s, I suppose that is not surprising.

The Captive God had a reasonably high budget for a Hart vehicle but it also stretched its money by employing participants in the Panama-California Exposition in San Diego as extras. That exposition and its Balboa Park location would prove to be a boon to filmmakers throughout the silent era, providing settings for everyone from Fatty Arbuckle (Fatty and Mabel at the San Diego Exposition) to Mary Pickford (Rosita).

Triangle’s trade publication bragged that they had spent weeks (weeks!) researching Aztec culture and copying their artwork for the picture. This claim of authenticity is somewhat undermined by the same publication suggesting that theater owners decorate their lobbies in a properly Aztec style by obtaining a statue. “It will not be hard to obtain a figure of an Indian god—anything of the ugly, prehistoric type will do, and it will be a big hit in the lobby.”

Interestingly enough, the cuts to the film for the home viewing market make it considerably more watchable for modern viewers. In the original version of the film, Chiapa is revealed to be a Spanish boy who washed up on the shore. The local tribe, being well versed in the customs of screen tropes, decide to make a god of him because that’s totally how it works. “White person = god” is one of the more irritating clichés of classic film and it never fails to illicit an eyeroll for your humble reviewer.

However, this angle is completely cut from the version of the film that I viewed. Hart’s character is the leader of his tribe and that’s that. It’s much easier to stomach than the deification of the character due to his lack of melanin. Don’t get me wrong, it’s still silly but a little less silliness was welcome.

In his breakdown of the film, historian William K. Everson wrote that he felt the picture contained considerable padding and was two reels worth of story in a five reel package. He has a point. In the end, we are left with impressive sets, some nice action and little else.

The Captive God is not a good film but it is an interesting one. Its outside-the-box setting (for Hollywood) and lavish production values offer visual interest but the story is generic and collapses under the weight of the sets and costumes. Enid Markey is cute but Hart is out of his element as a rather by the numbers hero. The film is worth seeing but remember that even Hart himself considered it to be a poor vehicle. I don’t think it’s a total bomb so much as terribly, terribly awkward. You may judge accordingly.

This film is available on YouTube for free and legal viewing.

I wish to thank Christopher Bird for sharing his collection and offering his expertise, which greatly assisted me in writing this review. I also wish to thank Dino Everett and the USC Hugh M. Hefner Moving Image Archive for the lovely transfer of the film.