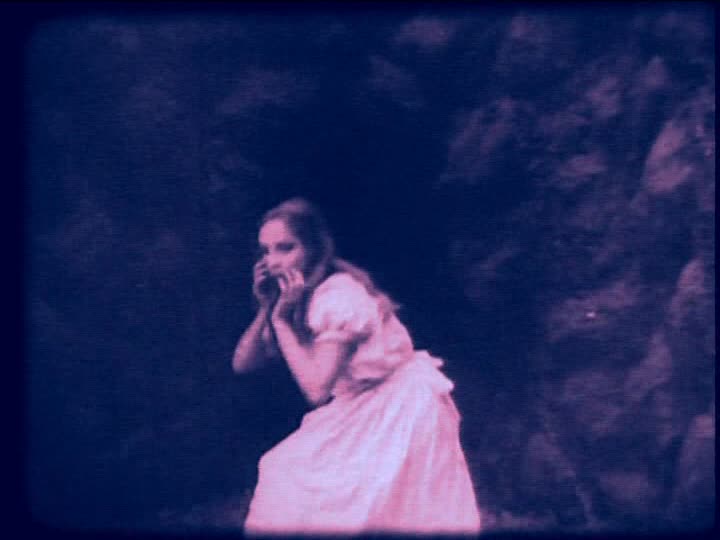 Lewis Carroll’s iconic book is brought to the screen in this relatively faithful adaptation. Alice spends the film chasing after that evasive white rabbit but ends up meeting a dodo, a psychotic queen and a talking caterpillar. Absinthe is a helluva drug.

In which Alice exposes the perils of collective bargaining.

Alice in Wonderland has been filmed many times, most famously under the Disney banner as both an animated feature and as an expensive 3D excuse to let Johnny Depp wear silly hats. Again. There was also an all-star live-action version released in 1933 with Richard Arlen as the Cheshire Cat, Cary Grant as the Mock-Turtle and Edward Everett Horton as the Mad Hatter, just to name a few.

These adaptations succeeded or failed to varying degrees but none really managed to completely capture the grimness and the whimsy of it Victorian source material. Would a silent film made in 1915, the fiftieth anniversary of the original book’s release, manage to replicate the spirit of Carroll’s nonsense tale? That’s what we are going to find out.

The film opens with Alice (Viola Savoy) playing with her cat and then wandering down by the river. She falls asleep and in her dreams she travels to the fantastic world of Wonderland. I won’t be doing a point-by-point synopsis as most people are familiar with her adventures. Basically, after meeting many mad people and animals, Alice returns to reality no worse for the wear.

The film moves along in fits and starts, eliminating scenes we now consider iconic in favor of focusing on some lesser-known elements of the book. Some of it is interesting but much of it reminds us that these scenes are obscure for a reason.

The film’s greatest asset is its costume design. Based heavily on the original Alice in Wonderland illustrations by John Tenniel, they feature such sophisticated details as eyes that blink and articulated jaws. Compare them to the high school drama club costumes in the 1914 Oz films and you will immediately see that Alice in Wonderland has the more polished product. It’s possible that this film shared costumes with a theatrical production. There was a stage version that played in New York a few months after the film opened.

However, the costumes are really the only sophisticated visual element of the film. The double exposure is jerky and strange looking, the wire stunts are dull and the camera remains stubbornly nailed to the floor. Examining films of 1914 and 1915, it soon becomes very clear that this film was about five years out of date in its technical ability. While Alan Dwan was unchaining his camera, Maurice Tourneur was crafting chic compositions, Raoul Walsh was tossing grit at the screen and John Collins was plumbing emotional depths, W.W. Young seemed to feel that a director’s job was simply to say “Action!” and “Cut!” Editing? Oh, sure, if you want to be all hoity-toity.

Early American feature films showed an enormous variance in quality, of course, but even a middling offering like James Kirkwood’s 1914 version of Cinderella, which starred Mary Pickford, had more tricks up its sleeve than this Alice in Wonderland (such as, you know, a medium shot once in a while). I wager this can be blamed on inexperience as I could find no evidence that Young directed a film before or after this one.

While the staid technique is the most obvious flaw of the film, there are also issues with the acting. Most of the performers are heavily costumed but Viola Savoy’s gawky tween Alice is not terribly appealing and there is not makeup or mask to hide it. She curls her limbs inward, as though she is ashamed of her growth spurt. This is especially noticeable to silent movie fans as stars of the era were usually marked by excellent posture. (Greta Garbo was a notable exception.)

While the script deserves kudos for including plot elements that are usually ignored in film adaptations (such as the Duchess, the re-enactment of the “Old Father William” poem and Alice harshing the mood by mentioning her cat’s rodent killing prowess in front of birds and rodents), it is pretty much by the numbers, doing very little to take advantage of the power of motion pictures. The screenwriter also makes the strange decision of cutting the Mad Hatter’s tea party but includes the tedious Mock-Turtle scenes. Needless to say, the pacing is all over the place.

The title cards (not sure whether they are original to 1915 or redone for the 1920s reissue) are a bit patronizing, explaining that Alice is having a dream when it is perfectly obvious. We are also treated to large signs labeling Wonderland and other famous locations. You know, just in case we were too stupid to understand.

For all that, this version of Alice in Wonderland is enjoyable, if only for the costume design. It’s flawed and old-fashioned to a fault but it does indeed capture some of the magic of the original story, which is not easy (ask Tim Burton). This is accomplished by embracing the weirder, more obscure and more violent humor of the Duchess scene, the animal conference and other sequences. It’s probably the result of this being an amateur production but the film’s fearless approach to its source material turns out to be a huge plus.

Fans of the book will definitely want to check this adaptation out and costume aficionados will find much to love.

Industrialists to the rescue!

Alice is not a particularly polished film but it did survive when hundreds of other silent films didn’t and it’s also available to the general public. The story of the version most commonly seen on home video is pretty interesting so I thought I would share it. (Please note that the Library of Congress lists a 35mm five-reel print among its holdings, which was recently screened in New York, and UCLA has four reels out of five, which it describes as being in an extremely fragile state.)

The American Motion Picture Corporation (AMPC for short) provides a very strange little footnote in silent film history. Under the command of businessman William H. Barr, it bought out assets of other independent motion picture companies with the stated purpose of praising and glorifying Barr’s interpretation of the American way. And what was that interpretation? Unions are literally Satan. Like, seriously, that was his platform. Now I realize that organized labor was and is a political hot potato but can we agree that this is a bit delusional? (And, no, I have no desire to discuss the modern political implications. We’re sticking to the past, kids.)

The AMPC did not distribute films to theaters but offered them to churches, schools, civic groups and the like. Union journals warned of Barr’s combination of movies and clergy (one of the companies he purchased was the Church Motion Picture Corporation) attacking organized labor but the films of the AMPC seem to have been far less focused than the unions feared.

For example, Annabell Lee was a deadly dull picture with only its Martha’s Vineyard scenery to recommend it. Bolshevism on Trial, on the other hand, was based on a book by KKK fanboy and garbage human Thomas Dixon. Its inflammatory content was more to the taste of Barr and his associates, who were very much fans of the red scare genre. (Lest we forget, Dixon and D.W. Griffith, everyone’s favorite rancid magnolia, were responsible for the 1915 film The Birth of a Nation.) In short, the AMPC’s practice of gobbling up other companies left it with a rather eclectic back catalog instead of a concentrated burst of propaganda.

Alice in Wonderland was originally released in 1915 by the Nonpareil Feature Film Corporation, a concern that, per the AFI catalog, had only one other film to its name before folding. Fly-by-night studios were common in the silent era and I suspect that the films and assets (if any) of Nonpareil changed hands several times before landing in the AMPC hodgepodge.

That being said, AMPC’s practice of distributing former theatrical releases outside of the theatrical circuit does seem to have inadvertently preserved films that would otherwise have been lost. Major studios infamously junked their back catalog for various reasons even before talkies hit but AMPC’s packrat sensibilities do seem to have paid off in unintended ways. By making numerous copies of films and sending them to every corner of the country, the AMPC gave them a much higher chance of survival and of ending up in the hands of collectors who would release them to the public once again.

So, I guess we do owe some thanks to the union-busting industrialist who just might have saved a slice of silent film history. Alice in Wonderland may be flawed but I’m glad to have it all the same.

Alice in Wonderland was released on DVD by Grapevine. It’s packaged as a double feature with Aladdin and the Wonderful Lamp, a version of the fairy tale with a mostly child cast. Alice is also available from Reelclassicdvd.com as a double feature with The Patchwork Girl of Oz. This version boasts a custom score by Donald Sosin. I have not yet seen it but have been very happy with other Reelclassicdvd.com releases in my collection.