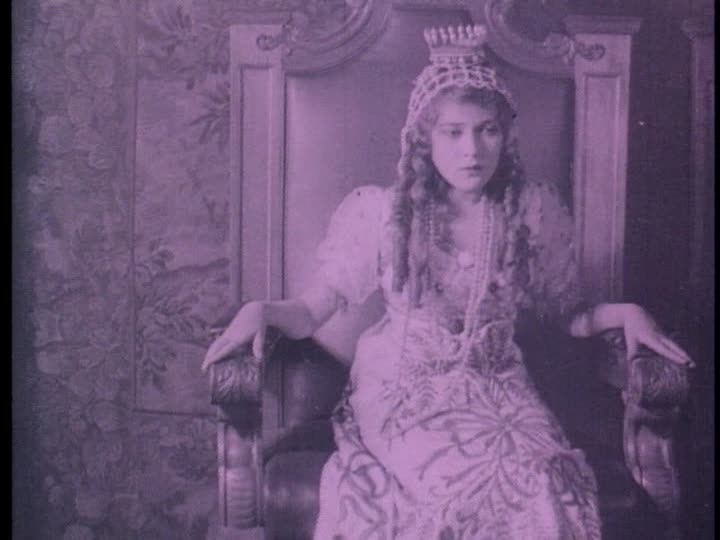 An abused waif, a handsome prince and a tiny glass slipper. I think pretty much everyone is familiar with this one. One of the most famous fairy tales of them all is given the Mary Pickford touch in this 1914 fantasy. Her Prince Charming is played by Owen Moore. In real life, he was anything but.

I will also be reviewing the 1947 Soviet version of the tale. Click here to skip to the talkie.

Excuse me, strange women, would you mind trying on this tiny used shoe?

By 1914, Mary Pickford had achieved a level of success in the movies that would have been unheard of when she debuted in 1909. Movie stars were regularly receiving prominent billing and being paid accordingly. The nickelodeon era was all but dead. It was the start of a new era of feature films and the Pickford name drew paying crowds to the movie theaters.

If her professional prospects were rosy, Pickford’s personal life was in disarray. In 1911, at the age of eighteen, she had impulsively wed Owen Moore, a fellow actor and co-star at the Biograph studio who was nearly eight years her senior. The marriage had been rocky from the start, with Moore jealous of his wife’s ever-growing popularity, threatened by her formidable business acumen and at odds with her family.

Pickford was becoming the first queen of Hollywood, commanding both money and respect from studio heads on down, but Moore chose to handle her growing authority by (quite literally) ordering her to the kitchen to make his sandwiches. There were even whispers of physical abuse.

(You can read more about Pickford’s personal and professional predicament in Pickford: The Woman Who Made Hollywood

by Eileen Whitfield and a more sanitized account in Pickford’s own memoirs, Sunshine and Shadow

Such an arrangement could not last but there were attempts at reconciliation, which usually involved Pickford forcing her current studio to hire Moore. In 1915, they co-starred in the historical film Mistress Nell and never shared the screen again. The pair divorced in 1920 and Mary Pickford would move on to the much more glittering union with Douglas Fairbanks, who was her equal in popularity.

Cinderella was the second-to-last Pickford-Moore co-production. It casts Pickford in the lead with Moore as her Prince Charming. Real life was not so simple but let’s take a look at how they appeared on screen.

The story of Cinderella is pretty much a straightforward adaptation with almost no changes to the source material other than having Cinderella meet her prince in the woods before the ball. This is a rather common change as the idea of meeting and marrying in a single evening no longer has the appeal that it once did. In any case, we get the pumpkin coach, the flight from the ball, the lost shoe and the search for the runaway bride.

James Kirkwood, who was a very good friend of Pickford’s and perhaps more, was both an actor and a director, though his directing career petered out in the early twenties. The direction of Cinderella gets a solid C+ in my book. Nothing wrong with it, it’s just not all that interesting. We get floaty fairies, a bit of in-camera magic and Mary Pickford is shot very becomingly. However, he stubbornly insisted on avoiding close-ups during what could be considered the emotional high points of the story, such as the great shoe fitting.

(Does anyone else find that aspect of the story icky? Hundred of feet in one shoe? That’s not sanitary!)

Pickford herself is subdued. Whether due to the script or the stress of her decaying marriage, her Cinderella does not have the spark and pluck that we are used to seeing from our Little Mary. She and Moore certainly do not display much chemistry on the screen (and the man simply did not have the legs to pull off tights, let me tell you) and the whole thing is a rather bland affair.

Another issue I have with this Cinderella is that she really does not seem to have it particularly hard. The wicked step-mother and step-sisters are cruel to our heroine and force her to… gather a small bundle of sticks in the woods behind their home. (Presumably, if she failed in her task, they would poke her with the soft cushions.)

Mary Pickford does her best to make this seem like a backbreaking task but it is still a small bundle of sticks. When our Cinderella breaks the stick over her knee and then collapses from the pain, it does not come off as abuse so much as an infomercial. You know, the ones where people cannot perform even the most basic tasks, such as cracking eggs, flipping pancakes or putting on their own seatbelts.

Another story element that gets added to the film is the inclusion of evil gnomes. Like, literally, evil gnomes. First, they terrorize Cinderella’s evil step-sisters by dancing (?) and then invade our heroine’s dreams, smashing a clock to remind her of her flight from the ball. These scenes are very strange and just end up muddling the story as the gnomes never actually affect the plot.

Cinderella is a movie that wastes a lot of potential. If it had allowed Mary Pickford to mischievous, it might have been a charming little fairy tale romp. As it is, I am actually struggling to remember any specific scene other than the stick breaking and gnome chiming. It’s worth seeing for Pickford fans but I would not recommend it as your first Pickford film.

Milestone included Cinderella as an extra on its DVD

release of the later Pickford charmer Through the Back Door. It has an appropriately mystical score from Donald Sosin. There are also assorted standalone releases but I have not viewed them.

Cinderella has been adapted countless times for the screen so it would be a shame not to hold a Silents vs. Talkies event. Cinderella comes in every flavor imaginable, from traditional to thoroughly modern. Today, we are going to be taking a look at a very obscure version, the 1947 Soviet production. (For ease of writing, I shall be referring to the 1947 film by its Romanized Russian title, Zolushka.)

Once again, I am taking for granted that everyone reading has at least a passing familiarity with the story of Cinderella. Like the 1914 Pickford version, this adaptation does not stray very far from its source but when it does, it does so in intriguing ways.

First of all, more than any other version of the story, this Cinderella is character driven. Our heroine, Zolushka (Yanino Zhejmo, a silent movie veteran, though she doesn’t look a day over twenty) is the victim of her evil step-mother (a camptastic Faina Ranevskaya) but she and her father are also partially to blame. They’re too nice, too accommodating. They are so eager for everyone to love them that they are doormats.

And Zolushka does not suffer in silence. She knows that she is partially to blame but she also is angry with her step-mother and with good people for doing nothing to help her. Further, she wants other people to notice her and to call her pretty. These aspects of the Cinderella character make her so much more interesting. You see, the classic version is not terribly proactive. She basically sits around and waits for some magical being to save her. She is not particularly self-aware, nor does she try to understand the root of her problems. I far prefer the smart, vaguely depressed Zolushka.

Of course, some changes had to be made to fit the film into Soviet ideals. Most American versions of Cinderella tweak the story to reflect admiration for upward mobility, the belief that beauty equals goodness and an idealization of royalty. This Russian production makes it clear that the king (a very funny Erast Garin) does not rule over his subjects so much as he is indulged by them. He is constantly threatening to abdicate when something goes wrong and only agrees to stay after persuasion from his forbearing subjects. And Zolushka’s status as the woodsman’s daughter is not seen as an obstacle to matrimony. The prince (Aleksei Konsovsky) views it as a positive bonus as he finds most noble girls to be dull.

Further, Zolushka’s charm lies not in her beauty but in her pleasant personality, industriousness and talents. Rather than the prince spotting a beauty from across the ball, the king himself immediately wants her for a daughter-in-law after she is able to mend his torn lace ruff with the needle and thread that she always carries with her.

Unlike most version of the story, which have a lot of build-up and then get the ball over quickly, this film lingers over the ball. It shows how Zolushka manages to win over the king, the prince and just about every other guest. At the risk of being trite, one might even call the romance communal, with the entire kingdom rooting for the young couple.

Finally, I enjoyed the small changes to the tale that papered over some longstanding plot holes. First, the glass slippers. Why did they remain when everything else transformed back into its original state? Well, the coach was a pumpkin, Zolushka’s dress was transformed from rags, etc. but the glass slippers were a gift from the fairy godmother’s apprentice, who has a bit of a crush on our heroine.

Then there is the great slipper try-on. This has been an issue since there is always the possibility that several women in the same kingdom would wear the same shoe size. Well, the script neatly deals with that. The impractical king is so eager to get Zolushka back for his son that he sends his guards out to look for her. He gives them the slipper as a means to help identify the young woman but he never actually meant it to be the only method of identification. The wily step-mother realizes that the king’s words could be misinterpreted to mean any woman who fit the shoe could marry the prince and uses this error to push her daughters forward, much to the king’s horror and annoyance.

The film also has delightful banter (though I am sure it is much funnier to Russian speakers) and quirky dialogue. All in all, it is perfectly marvelous little movie.

And the winner is… The Talkie

This is a much healthier version of Cinderella. I liked the messages that it sends. Be nice but don’t be a doormat. Talent is more important than beauty. Good parents should stand up for their children. Much better than the Disneyfied “Be beautiful and sweet and magic mice will make you a princess” message.

Zolushka is a charming family film with a surprisingly deep protagonist. It is not well-known outside of Russia but this entrancing motion picture deserves to be discovered by audiences all over the world.

(The re-release version has been colorized. Normally, I am very much against this sort of thing but I actually think the colors work quite well. They are not overly bright or jarring and give a pleasant, water-color-like feel to the story.)

The film has not received official release in the U.S. Here is a link to a YouTube version with fan-made English subtitles.