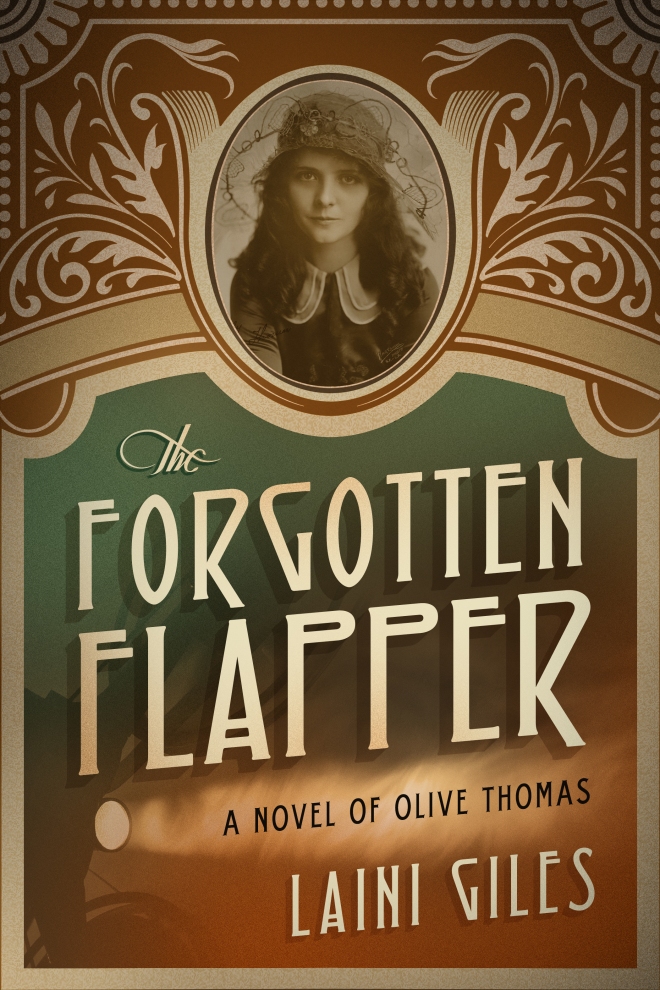 Today, we’re going to be taking a look at silent movie stars in the world of fiction. Laini Giles has just released a novel (The Forgotten Flapper) based on the life of Olive Thomas and she has agreed to visit us and answer some burning questions. Enjoy!

In 2009, I read the amazing novel Loving Frank by Nancy Horan (about Frank Lloyd Wright and his mistress, Mamah Borthwick Cheney). I fell in love with it– it felt like I was watching a movie; it was THAT vivid. That was when I knew I’d found the genre I wanted to write in– biographical fiction- every detail researched to the nth degree (people, buildings, shows, scenery, etc). I’d always been obsessed with old Hollywood, so that made a perfect background. I LOVED that time period. Around that time I also began obsessively watching Kevin Brownlow’s old Thames television silent film documentary series. So who would my subject be? I suddenly remembered reading about Olive years before, and she popped into my head. I was entranced with the idea of bringing her to life. I knew she’d make a helluva novel!

How were you introduced to her life and career?

I’m ashamed to admit it now, but I found Hollywood Babylon at the library when I was about 13 (the Hollywood bios were right next to the true crime section where I usually hung out). I was fascinated by all the scandals and terrible deaths and crime and whatnot. Once I began researching though, I covered every possible fact I could track down about her, from the Follies to interviews with her, information about her family, her friends, her romances, Paris in 1920, you name it!

Is the book going to be a strictly biographical novel or will you be introducing genre elements (romance, mystery, etc.)?

It started off a straight-ahead, 3rd person biographical novel, beginning with her time in Pittsburgh. But I wrote and wrote, and it wasn’t singing to me. So I set it aside for several months and let it percolate. In the meantime, I read another wonderful book, Marion Meade’s Bobbed Hair and Bathtub Gin, about four of the main women writers working in the 1920s (great dialogue!). And that was when I realized why it was just laying there. It was in a 3rd person, 21st century, college-educated woman’s voice. Olive insisted that she take over so the voice would be correct, and that was when I had the brainstorm. The ghost needed to tell the story! So there is a slight, supernatural aspect, but only because it was absolutely necessary to tell the story that Olive wanted to tell. There’s a little romance, simply because how can you imagine Ollie without Jack (or Flo, or Myron, or…). There is no mystery. I conclusively state my theory of what happened to her. Many people might not agree with it, but to me, it’s the most logical explanation.

As closely as I could possibly make it. I read bios of her friends, I scoured tons and tons and tons of old newspaper and magazine articles about her and Jack, and a friend of mine who was an Ollie expert and had seen papers at UT and UW-Madison read an early copy and shared his insights with me on every event and how feasible my scenarios were according to where Ollie and Jack were at any given time. It could be impossible at times, with as much traveling back and forth cross country that Jack and Olive did. My husband would often hear me groaning from the other room and would peek his head in the door. “Everything OK?” “Timeline,” I’d say, gnashing my teeth. And then I’d have to rewrite or tweak another scene. After 26 rewrites, I think it’s in good shape now!

In your research for the book, what was one fact about Olive Thomas that really intrigued you?

I would have to say Ollie’s roster of upcoming films that was released just before she and Jack left on their trip. I always wondered if perhaps any of the properties had been re-purposed and/or renamed and starred someone different. If Myron was able to sell any of them to interested parties. Plus, I always wonder how Ollie would have been in those roles since she was starting to really grow as an actress when she died. And of course, there’s also the question of if she ever would have left Jack had she not ingested that mercury. I think we all wonder about that.

Olive Thomas is mostly remembered for her tragic death. What would you prefer her legacy to be?

I’d love for more of her films to be discovered in one of these treasure troves in an archives or an old covered-up swimming pool or city dump that we’re always hearing about (especially Upstairs and Down!). Since Ollie mentioned to at least one reporter that she wanted to be remembered as a certain type of character, and she was really beginning to come into her own, I want everyone to know that she was the original “baby vamp.” She was a flapper before any of the others. It’s an important role that I think has been denied her too long (thus, the name of the book).

A native of Austin, Texas, Laini Giles grew up the daughter of bookworms, and became a Nancy Drew devotee early on. When she realized there might be no escape from hairy tarantulas and bad guys with guns, she put her detective dreams on hold and wrote about them instead, finishing her first mystery novel with custom illustrations when she was eight.

A graduate of the University of North Texas, she put the writing on hold for a while when real life got in the way (i.e.—she met and married her Canadian husband and headed north for maple-flavored goodies and real beer). She highly recommends moving to another country and not being able to work for a year for finishing any novels you may have laying around.

Laini and her husband live in Edmonton, Alberta with their two cats.

The Forgotten Flapper is available now in trade paperback and ebook format.