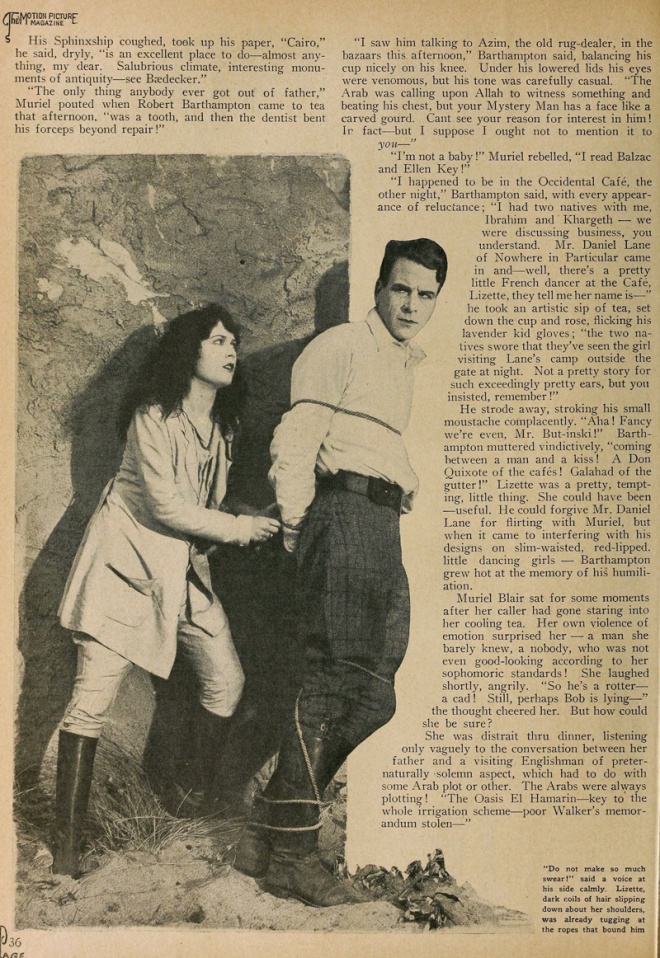 Another day, another sheik film. It seems that even my beloved Milton Sills was not spared the indignity of appearing in one of these things. Burning Sands was billed as “The Sheik for men” and shared both director and filming locations with its predecessor.

(To tell the truth, these overblown desert romances are my guilty pleasure. They’re dreadful but I can’t seem to get enough!)

Mr. Sills was supported by two DeMille actresses: Wanda Hawley (a DeMille discovery best remembered today for her major role in The Affairs of Anatol) and Jacqueline Logan (who was Mary Magdalene in King of Kings). The talented Louise Dresser is also on hand as the genial best friend-type.

Much was made of the movie’s Oxnard filming location.

Motion Picture Magazine acted as though Oxnard was on par with camping in the Sahara. I actually rather like Oxnard and I have to say that I would infinitely prefer camping there to pitching a tent in the Sahara.

But how did the movie fare once the critics got their paws on it? Not too well, I’m afraid.

In other words, hot dirt! Of “The Sheik” school, and made by the same director — George Melford — who started the fashion in desert love, hate and passion. The cast is fairly good — Jacqueline Logan, Wanda Hawley, Milton Sills — and the sets have the east of Suez look. But audiences arc beginning to tire of a conventional story in the midst of tribal feuds and sand storms and camels — especially camels!

Hey! What did camels ever do to them?

It’s the same old story of the desert with its caravan and the exiled English- man which confronts the spectator in “Burning Sands.” There is no variation in this formula which, now that Valentino has made it popular, is brought forth from its cubby-hole in the filing cabinet marked “B.” The Valentinoritas will miss their favorite here. In his place is Milton Sills trying to appear as convincing as possible under the burden of carrying on the heroic virtues. He is awfully manly, is Milton here — a figure too good to be true. Would you know the plot? Well the spoiled darling of society is charmed by the Englishman’s colorful tan and wardrobe. Being so far away from Hyde Park she has time to realize that the time and the place are in order when one is looking for romance. There is no story interest because the idea is too trite and the development brings forth all its stupidity. George Melford directed the picture. He also directed “The Sheik.” Therefore his sands, palm trees, caravans et al. are entirely appropriate. It’s a favorite recipe — this story. Consequently it will be produced ’til the sands of the desert grow cold.

I don’t know… It actually sounds like an amazing kitsch-fest to me. And I am always up for Milton Sills doing manly things in a manly fashion, manly man that he is.

Wanda Hawley, the leading lady of the picture, is quite a fascinating and elusive figure. She enjoyed some measure of popularity in the late ‘teens and early twenties but had no screen credits past 1932. Predictably, her IMDB profile states that her career ended with the coming of sound. Since I find that these statements are almost always incorrect, I decided to do a little digging.

Miss Hawley did indeed work steadily through 1926, only made one film 1927 and one in 1929. On the surface it looks like sound is the culprit but not so fast! Take a closer look at her screen credits and you will see that she was employed with Famous Players-Lasky/Paramount until 1923. From that year forward, she jumped from studio to studio. By the mid-twenties, she was appearing in poverty row productions. Oh, and that pivotal year of 1927? It’s important to remember that the film that brought on the talkie revolution, The Jazz Singer, was not released until early October of that year. That leaves three-quarters of the year when silents reigned supreme. Anyway, Wanda’s 1927 release was actually filmed in 1926.

So, talkies were not the culprit. What was?

Well, I did a little detective work. Miss Hawley was barely mentioned in fan magazines after she left Paramount. At first, I thought she may have been pushed out but that was not the case. Wanda was apparently tired of playing adorable ditzes and felt that she had a chance at better roles if she struck out on her own. This change of employment coincided with her divorce from Allen Burton Hawley. Mr. Hawley claimed that he would “astound the movie fans of America” with his revelations about his wife.

Wanda also took work with foreign studios during this period, including another sheik film shot in Cairo. There is a small item on her Egyptian working vacation in 1923:

Bashing your host country? Charming. (That is, if she wrote this little quip herself. One always wonders with fan magazines.)

She appears in an ad or two and is listed in film casts but is pretty well ignored by the press. Some loyal readers of Photoplay noticed this and called attention to it:

Then I came across this item in a 1924 issue of Photoplay:

Weight issues are not the sole province of modern actress. Silent leading ladies were also judged by the numbers on the scale. However, our silent starlet lost the weight and looked svelte.

On to 1925! Where is Wanda? Still mentioned as “appearing in” but definitely not getting the star treatment. Then I found a little offhand mention in the gossip department by Cal York. It seems that while at Paramount Miss Hawley had put on airs and annoyed at least one reporter.

Wanda Hawley annoyed this gentleman of the press, it seems. Of course, one must take this opinion with a grain of salt as Mr. York mentions Mary Miles Minter’s faltering career in the same breath. And we all know that the cause MMM’s downfall was considerably more dramatic than simply acting the duchess. However, this description of Wanda was echoed by her niece, who was interviewed by Michael G. Ankerich for his book Dangerous Curves Atop Hollywood Heels.

By 1927, Wanda Hawley’s career was being described in the past tense. Her saccharine comedies were blamed but the semi-scandalous divorce could not have helped her case.

It is important to remember that movie careers moved much faster in the silent era. Performers could potentially put out dozens of films in a single year and my estimate is that most mid-level stars would release between four and ten pictures a year. Big stars had the luxury of giving their productions more time but contract players like Wanda Hawley had very little control over their own destiny. With so many films in production at once… Well, downfalls were sped up too. A star may be popular but a few bombs in a row and they would be shown the door.

Sound had nothing to do with Wanda Hawley’s fading career. Her story is all too typical. She was popular but a combination of ill-chosen vehicles and lack of a long-term contract (after leaving Paramount) doomed her prospects. Tastes changed and Wanda Hawley was last week’s flavor.

The combination of minor scandal, poor career decisions and a difficult personality were enough to bring down this star. Sound was merely the final nail in the coffin.

With that mystery out of the way, let us move on to happier topics.

I have a very special treat for you. Motion Picture Magazine adapted Burning Sands into a short story and I am presenting it to you in its entirety! Warm sun and purple prose.

(The story was published in 1922 and is not politically correct. At all. You have been warned.)

Here is Burning Sands the song to listen to while you enjoy the tale.

Out of music? Here is another guilty pleasure of mine: Ketelby. This is his ode to the Nile river.

Back to the story!

Oh my! Invoking deities at the end was a master stroke of awfulness. But my main question is where can I find people to feed me grapes? I love grapes. Must one go to the Sahara to hire such workers? Let’s hope someone recovers the film so we can learn the answer!

Oh, and in case you are interested, the original novel is in the public domain and may be freely downloaded. Or you can snag a hard copy from 1922, complete with scenes from the movie!