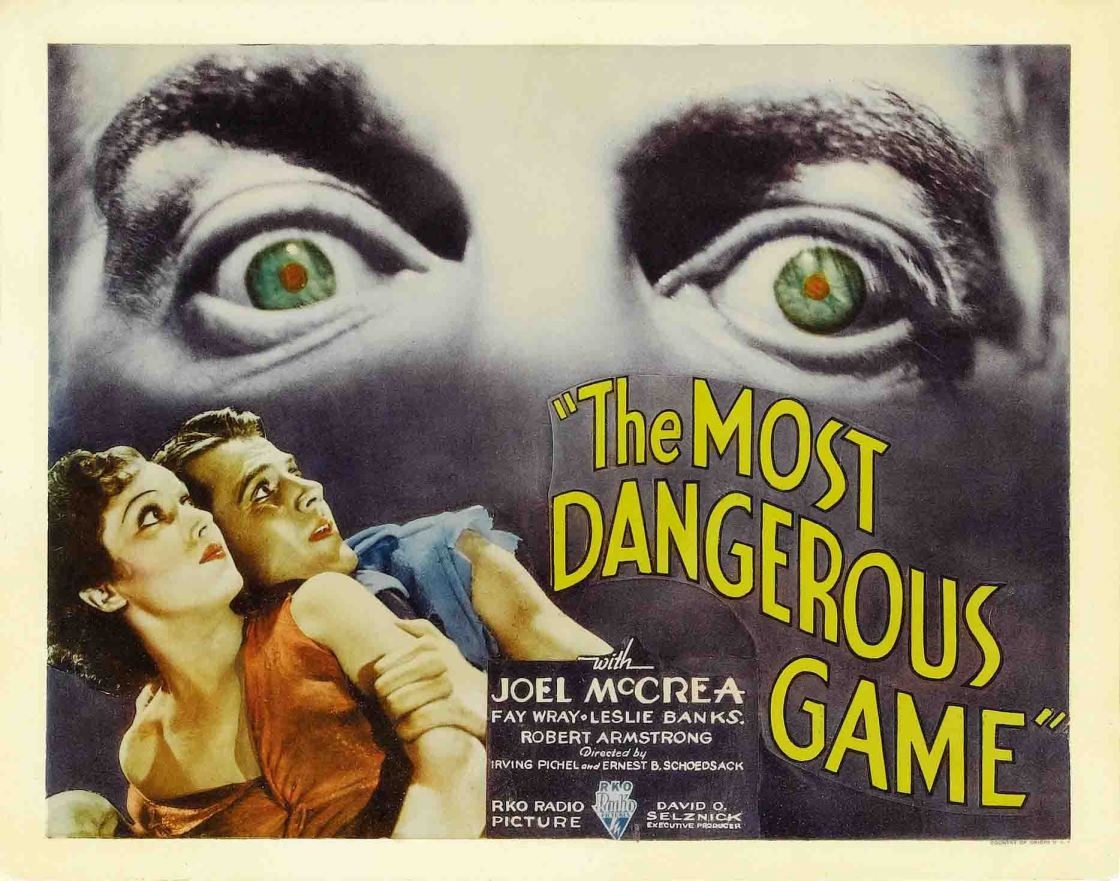 After the Silents: The Most Dangerous Game (1932)

Another little pre-Code wonder is the subject of today’s review. Tell me if this plot sounds familiar:

Rich Guy: I am a hunter! How I love to hunt! Please join me!

Hero: Okay, what are we hunting?

Rich Guy: I found the best sport, the best!

Rich Guy: I’ll show you in a minute.

Rich Guy: Now, I’m going to give you a ten minute head start. Oh, didn’t I tell you? I’m hunting… you.

This plot gets recycled every decade or so and the psychotic hunter has been played by everyone from Rutger Hauer to Andy Griffith. The Most Dangerous Game was one of the first films to make use of this narrative device. It is also an excellent bit of entertainment.

The movie has another claim to fame: It was filmed on the same sets as King Kong and shared the same leading lady (Fay Wray) and key members of the cast and crew.

Fay Wray was, of course, an actress in the silent era as well. The film also boasts the talents of Noble Johnson, childhood friend of Lon Chaney. Johnson’s studio, the Lincoln Motion Picture Company, was founded with the specific purpose of portraying African-Americans in a realistic and sympathetic manner on the movie screen. Both Wray and Johnson will be given the attention they deserve but first, the review!

The film is based on a 1924 short story by Richard Connell (you can read it online here). The original plot involved a big game hunter (back when that was considered a legitimate profession) named Rainsford who falls overboard and ends up on the island home of the eccentric Cossack General Zaroff. Zaroff is also a hunter but the sport was beginning to bore him. So, he found a new animal to hunt: humans. When Rainsford refuses to join him, Zaroff is obliged to hunt his guest.

The movie stays close to the plot of the original tale but as the story was a bit thin, characters are added to flesh things out. A love interest, Eve (Fay Wray), and her brother, Martin (Robert Armstrong), are two Zaroff’s shipwrecked guests. Instead of falling overboard, Rainsford’s yacht is deliberately wrecked by Zaroff, which I think makes the hero seem a bit more capable. I mean, no one wants a klutz for a main character in an action film, unless it is a comedy. The question as to just what Zaroff hunts is teased out far longer (in the story, the general tells Rainsford all about it immediately). Normally, I am not in favor of stretching suspense but I think that it really works in this case. After all, Zaroff is proud of his innovation to the sport of hunting and his teasing hints as to just what his “new animal” is are very much in character.

Joel McCrea plays Rainsford. I like McCrea very much in most anything and thought he did an excellent job as the hunter who finds that the shoe is on the other foot. Count (not General) Zaroff is played by stage veteran Leslie Banks. Banks is suitably deranged but he employs what is possibly the worst Russian accent I have ever heard. I mean, it is Natasha Fatale/Kingdom of the Crystal Skull bad! And I don’t know what language he is speaking to his assistant, Ivan (Noble Johnson), but it surely is not Russian!

The bad accent does interfere a bit with my enjoyment but once the hunt begins, things get really exciting. Rainsford and Eve flee into the swamp with Zaroff in hot pursuit. Rainsford is as wily as can be. Eve isn’t given much to do but Fay Wray does get a chance to show off those famous lungs.

I like to say that there are pre-Code films and then there are PRE-CODE films. This is definitely the latter. In addition to the hunting-humans plot, the film also features scantily clad leads, a shockingly gory shipwreck in which the crew is cooked to death in their own boiler room (however, the shark attacks were a bit cheesy) and a hero who matches the villain for enthusiastic violence. The film was denied re-release under the code and has since fallen into the public domain.

The Most Dangerous Game is an exciting thriller with some very good acting and very bad accents. Its macabre subject matter and famous cast make it essential viewing for pre-Code fans.

Availability: It’s easy to track down a so-so print, thanks to its public domain status, but if you want quality, the Flicker Alley Bluray is what you want to buy.

You may not know this but the owner of the most famous scream in motion pictures started out in the silents. She was Erich von Stroheim’s leading lady in his extravagent film duo, The Wedding March and its lost sequel, The Honeymoon. She also starred opposite Gary Cooper in another lost film, The Legion of the Condemned and as the heroine of the 1929 version of The Four Feathers.

Fay Wray was born in Alberta, Canada in 1907. After her family relocated to Hollywood, Wray began making film appearances at the tender age of sixteen. She was still a teenager when she was named on of the WAMPAS Baby Stars of 1926. Her fellow babies for the year included Mary Astor, Joan Crawford, Dolores Costello and Janet Gaynor, among others.

Wray signed on with Universal and made some westerns but her career really took off when she was chosen to be von Stroheim’s lead. Sound was starting to take over the motion picture industry but Wray’s voice proved to be her fortune. She starred in the marvelous little horror comedy Doctor X (which I reviewed a while back) and The Mystery of the Wax Museum, one of the first hey-those-statues-are-really-realistic horror films.

Of course, an enormous primate would become Wray’s most famous co-star. She was cast in King Kong when Jean Harlow proved to be unavailable and it was the scream heard round the world. Wray’s career began to wane as the 30’s continued, though she would act into the 60’s and made her final appearance in 1980. When she passed away in 2004, the lights of the Empire State Building were dimmed in her honor.

I have to say, though, that The Most Dangerous Game is my favorite Fay Wray film. True, she is a damsel once again but her performance is solid and her character has brains. Plus, the thing is just so much fun to watch!

The thing I love about writing these features is how I get to learn more about performers who are no longer well known but who led fascinating lives. Noble Johnson is one of those wonderful discoveries.

A childhood friend on Lon Chaney. A pioneering African-American film producer and actor. A master of movie disguise. Noble Johnson had quite a resume.

Born in Marshall, Missouri in 1881 but raised in Colorado Springs, Noble Johnson was acquainted with Lon Chaney (two years his junior) and the pair struck up a friendship as adults. Johnson made his first motion picture in 1915. A strapping man who stood 6’2″, he was soon steadily churning out films. He played characters of every race and ethnicity imaginable.

In 1916, after only a year in the motion picture industry, Johnson joined forces with his brother George to form the Lincoln Motion Picture Company. African-American characters were often portrayed in a simplistic, negative or cliched manner in films of the period and the noble brothers intended to create movies with all-black casts who would counterbalance these harmful depictions.

Johnson resigned from the studio in 1920 and continued his success as a character actor. He appeared in such famous silents as The Navigator, The Ten Commandments, The Thief of Bagdad and Noah’s Ark, just to name a few.

Johnson made a successful sound transition and continued to play Russians, Native Americans, Indians and African chieftains. He appeared in Moby Dick (1930), The Mummy (1932), King Kong (1933), She (1935) as well as dozens of other films. His role as Ivan, the mute Cossack in The Most Dangerous Game, made excellent use of Johnson’s imposing height and screen presence.

Looking in the background of classic films can often be very rewarding, as the career of Noble Johnson shows.