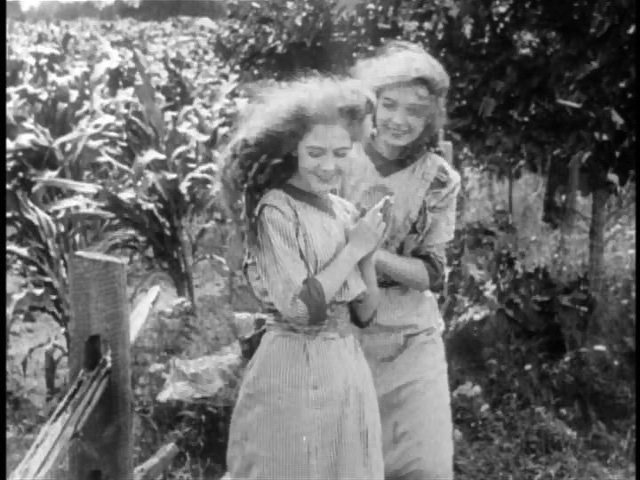 Two sisters, an empty house, a dishonest maid and a fortune in the safe. A recipe for a melodrama if I ever saw one! D.W. Griffith directs the Gish sisters in their motion picture debut, with able support from Bobby Harron, Elmer Booth, Harry Carey and a very early appearance from Antonio Moreno!

101 years ago, Mary Pickford helped her childhood friends, Lillian and Dorothy Gish, secure positions at the Biograph film company. The pair made their debut unhailed (Biograph did not give name credit to even their biggest stars) in one of director D.W. Griffith’s signature race-to-the-rescue potboilers.

(Since the characters are not given names in the title cards, as was common at the time, I will be using the actor’s first names. I will also be spoiling the dickens out of this thing!)

The plot is a simple one. Two sisters are mourning the recent death of their father. Lillian is the older, more practical sister while Dorothy is plucky and flirtatious. Dorothy’s shy boyfriend, played by Bobby Harron, is heading off to college but he would like nothing more than a kiss from his sweetheart. She refuses (reluctantly) and Lillian protectively pulls her sister away.

Meanwhile, the girls’ older brother (Elmer Booth) has settled part of their father’s estate and places the money in the family’s safe. The dissolute housekeeper (Grace Henderson) overhears the siblings talking about the money and calls on her unsavory “friend” (Harry Carey) to help her steal the cash.

Once the brother has returned to the office, Grace and Harry set to work breaking the safe. In order to keep the girls from getting help, Grace threatens them with a pistol through a hole in the wall. The sisters are terrified but Dorothy plucks up the courage to telephone Elmer for help. Elmer races off at breakneck speed to save his sisters.

Meanwhile, Bobby the boyfriend is moping about the house, hoping to see Dorothy again. He sees the terrified sisters through the window and helps them escape. Elmer and the cavalry arrive (they were delayed by a moving bridge and a very young Antonio Moreno) just in time to arrest Grace and Harry. All is well and Bobby is given permission to kiss Dorothy as a reward for his bravery.

D.W. Griffith’s exuberant directing style was a bit of a shock to the Gish girls. Lillian Gish later wrote that Griffith had trouble telling she and Dorothy apart and referred to them by the color of their hair-bows, Red and Blue. If true, it is likely more due to the fact that the sisters had identical hairstyles and dresses and because of the frantic pace of some of the scenes in the film.

Even more distressing was Mr. Griffith’s manner of getting his young actresses to express fear. During rehearsal, he pulled out a real gun and began chasing them around the room, firing shots into the ceiling. Mary Pickford, one of the few people who had the spine to stand up to Griffith, later took him aside and told him that he could not treat her friends like that. From that time forward, Griffith called the Gish sisters by their proper names and did not shoot guns in their presence. (You can read Lillian Gish’s full account of this eccentric meeting in her memoirs.) Oh, he sounded like a real peach to work for.

In any case, it is interesting to see that even in their debut, the sisters had distinct screen personas that would stay with them for the rest of their careers: Dorothy was the spunky one, Lillian was the serious one. (Lillian once said that she was as funny as a barrel of dead babies.)

The reaction to the film from the critics was muted. So-so potboiler with sub-par camera work and the young leading ladies needed time to grow as actresses.

The fact that some film companies did not identify their players has sometimes led to the misconception that audiences had no idea who these people were. In fact, movie magazines like Moving Picture World would answer queries from their readers and identify these anonymous players by name.

Even if the critics were not unduly impressed by the film, audiences were very curious about these charming young ladies.

Part of the fun of watching Biograph shorts is keeping your eyes peeled for the cast. Actors could be heroes one week, villains the next and bit players the week after that.

An Unseen Enemy is no exception. I got a particular kick out of Elmer Booth (The Snapper Kid of The Musketeers of Pig Alley) as the loving brother. He does mug a bit but is overall very charming. And Harry Carey (who played his pal in Musketeers) shows up as the safe-cracker. I just have a soft spot for Harry, future cowboy star.

But it is the Gishes who really make the film. They are raw and young (Lillian was just shy of 19 and Dorothy was only 14) but they have charm and screen presence that is already obvious.

In spite of Lillian being the more famous sister, it is Dorothy who steals the show in this film. She is the one with the love interest. She is also the one with the courage to brave the unseen enemy to call for help. Lillian is the protective, bossy sister for the first part of the film but Dorothy becomes the bold leader once there is danger. (Griffith was known for his damsels but he also had a weakness for spitfires.) Of course, the film does not stray too far out of the norm and Dorothy faints while trying to grab the pistol.

While An Unseen Enemy is certainly an exciting and suspenseful film, it does have its share of plot holes. If Bobby Harron could climb through the window to save the sisters, why couldn’t they have just done that earlier? Why did the housekeeper, who was familiar with the house, lock the girls in a room with a telephone? Oh well, I suppose it doesn’t pay to get really nitpicky over details in these “sausage” films, as D.W. Griffith called them. On the other hand, Griffith is supposed to be the king of “race to the rescue” scenes so I guess I have a right to be a little disappointed.

In general, though, An Unseen Enemy succeeds in being exactly what it wanted to be: An exciting way to spend 15 or so minutes. It is also a rare film since it contains the debuts of two great screen actresses. Too many debut films have been lost, we should be grateful that we can enjoy this one.

An Unseen Enemy is available on DVD from Flicker Alley and from Kino Lorber. Both editions are of very high quality.