Silent Movie Bookshelf: The Parade’s Gone By… by Kevin Brownlow

This was the first book on silent cinema that I ever bought. I couldn’t have asked for a better introduction. Film historian Kevin Brownlow has proven to be one of the strongest advocates for silent cinema and, as it turns out, he is a heckuva writer too.

Since this book was published by a university press, it is a little on the pricey side though you can get a used copy. Well worth it. This book really captures the appeal and flavor of silent films. It’s the next best thing to being there. Originally published in 1968 (when many silent cinema participants were alive to be interviewed) The Parade’s Gone By… has remained in print ever since.

What is it?: A collection of interviews of silent era directors, stars and cameramen interspersed with commentaries on topics like acting, editing and cinematography. The individuals interviewed ranged from the superstars (Mary Pickford, Gloria Swanson) to the generally forgotten (Reginald Denny, Edward Sloman). Individual films of importance, such as Ben Hur and Robin Hood, are given their own chapters. 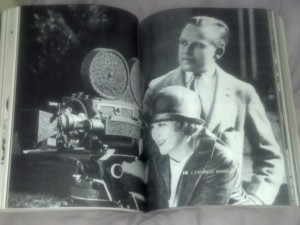 Writing Style: Brownlow’s obvious affection for his subject shines through but he is never fawning. Best of all, he knows when to keep quiet and let his interview subjects do the talking. Brownlow’s defense of silent films is eloquent and logical.

Why this book was written: Brownlow uses his introduction to explain his purpose in writing The Parade’s Gone By… and explains his choice of title:

The title of this book sprang from an interview with Monte Brice. Brice, who had been a writer and director of silent comedies, told me of the time he watched the shooting of The Buster Keaton Story, a 1957 Paramount film loosely based on Keaton’s life.

“They had it all wrong,” said Brice. “I tried to tell them that things weren’t like that in the twenties, but they wouldn’t listen. I remember the assistant, a young guy. He said to me, ‘Look, why don’t you go away? Times have changed. You’re an old man. The parade’s gone by…'”

Brownlow goes on to explain that he is attempting to correct the mistaken idea that silent movies were creaky Victorian artifacts. He wants to recapture the spirit of the era.

I think he succeeded.