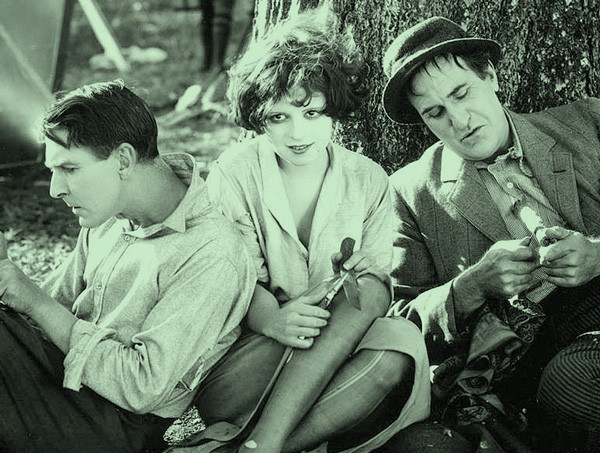 Think silent movies are dusty? Meet Clara! The divine Miss Bow is a pretty city girl who winds up married to a stodgy Canadian trapper. Then a city man shows up and starts a flirtation with our bored little flapper. He gets more than he bargained for. Basically, this is the most fun you can legally have at the movies.

Flapper in the woods

Every few years, some starlet is trotted out as the new “It” Girl. To many film fans, though, there is only one actress who deserved the title: Clara Bow. Still pictures don’t do her vivacious personality justice, she has to be seen in motion pictures to be appreciated.

Bow had spent much of her young career in low budget potboilers. While Bow is usually very charming, the films themselves would not be remembered at all if it weren’t for her. Mantrap was different. A Paramount production, it had a good director (Victor Fleming, who would go on to very big things in the sound era) and a cast that could ably back the petite dynamo.

Ralph Prescott (Percy Marmont) is a divorce lawyer specializing in women’s cases. The flirting and complaining of his clients gets on his nerves and he seems bound for a breakdown. His friend Woodbury (Eugene Pallette) suggests a camping trip to Mantrap, a little outpost in the middle of the woods.

Meanwhile, Joe Easter (Ernest Torrence) is also feeling trapped. A storekeeper in Mantrap, Joe Easter decides to go to the wild streets of Minneapolis to sow some wild oats. Once there, he meets Alverna (Clara Bow), a wild manicurist. It is a true case of opposites attracting. The hulking bumpkin and the tiny flapper are married in a whirlwind.

Ralph arrives in the woods and soon finds that camping is not to his liking. He runs into Joe, who offers to put him up at his place. Ralph is not impressed with Mantrap until he takes a gander at Joe’s wife. Alverna is bored, bored, bored in Mantrap. Ralph reminds her of the big city and it isn’t long before the pair decide to run off together. Joe discovers that his wife is gone and sets off in hot pursuit. But the confrontation in the woods brings about a twist ending that no one could have predicted.

If you were to want a single movie that distills the essence of the Roaring Twenties, Mantrap would be it. The intertitles positively snap with period slang. Here are some favorites:

On Joe’s choice of dinner guests, Alverna blurts, “Gee, you always pick out the worst crumbs in the bakery!”

When irritated by Ralph: “If you could fish as well as you can crab – there’d be many an empty lake up here.”

The plot is also an artifact of the decade. A few years later, it would have been unthinkable for a girl to leave her husband and not Pay the Price for it. In Mantrap, Clara not only gets away with it, she has a blast doing it. It is also fun to see that, in an era of damsels in distress, Alverna declares her independence from both the men in her life. And makes off with their boat!

It’s no wonder that Clara Bow’s popularity caught fire. She really was the personification of the flapper. Fun loving, wild and independent. Everything that is missing in most movie heroines today, actually. If you want to see Clara Bow in top form, Mantrap is a terrific choice. It moves fast and features some top-notch character actors.

Mantrap is widely available on DVD from assorted small dealers but the best print is to be found in the box set Treasures 5: The West. (The screen grabs for this review are from the Sunrise Silents version, now out-of-print.)