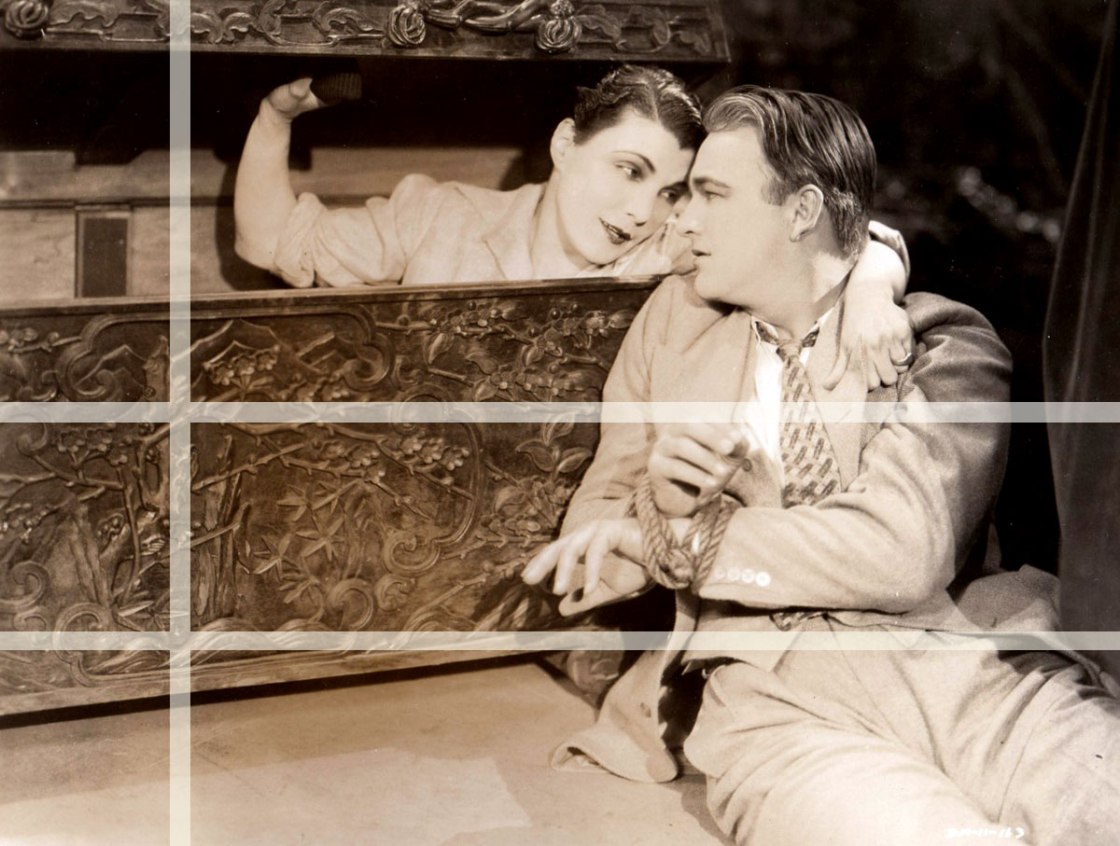 Eve (Leatrice Joy) is a tomboy raised on her father’s ship. She dreams of romance but there are no eligible bachelors around. When chance sends the handsome Bill Stanley (William Boyd) her way, she is determined to land him as a husband, even if it means shanghaiing him first!

Leatrice Joy was the epitome of 1920s glamor, what with her ultra-short hair and ultra-sleek wardrobe. For this film, though, she sheds the trappings of fashion and trades in her fans and beads for wool slacks and a man’s shirt. Eve’s Leaves is one of my favorite romantic comedies– and not just because Leatrice’s love interest is played by William Boyd!

Captain Macey feels that he has the perfect method for keeping his daughter out of trouble and away from men: he has brought her up as a boy on his cargo ship, The Garden of Eden. Unfortunately, Eve (Leatrice Joy) has discovered men. With the help of the ship’s cook—and his collection of romance novels—she has decided to go ashore and find her true love.

The Garden of Eden docks in a Chinese port and Eve begins her search. At the same time, American city boy Bill Stanley (William Boyd) is in China taking in the sights. Eve catches sight of him and, as suggested in one of the cook’s magazine articles (“Marriage and Eugenics????”), asks him certain necessary questions:

“Are you single?” “Healthy?” “Industrious?” “Is there any insanity in your family?”

Bill isn’t even sure that Eve is a girl and he has no intention of getting involved with her. Not one to be discouraged, Eve decides that sterner measures are needed. Bandits have attacked the port and The Garden of Eden has to set sail quickly but they are under manned. Captain Macey has ordered his crew to find more men, even if they have to shanghai them.

Now what do you think a resourceful girl like Eve will do with an idea like that?

With Bill locked securely below deck, it looks like everything is going Eve’s way. That is until the bandits swarm on to the ship before it can set sail. Their leader, Chang Fang (Walter Long), wants passage to his stronghold at a nearby port. He also has his eye on Eve.

With her true love securely bound and unable to resist, Eve is ready to make her move but her friend the cook advises her to get some sex appeal first.With the help of a fashion magazine, some curtains and a string of beads, Eve decks herself out. Only Chang Fang is interested. Bill thinks she’s a scream.

But silly or not, Eve has broken the ice. Now if she and Bill can just manage to escape Chang Fang and his small army of bandits…

Even though DeMille did not direct Eve’s Leaves he did serve as producer and his fingerprints are all over the production: the dramatic use of light and shadow, the lush photography, the performances of two of his favorite leads, the cute use of biblical symbols. The scenario and title writers gets their money’s worth out of the garden of Eden. In addition to ships names and turns of phrase, there is a funny kissing game involving apples.

More handsome than beautiful, Leatrice Joy was an ideal model for the boyish fashions of the twenties. She replaced Gloria Swanson as DeMille’s favorite clotheshorse, though her reluctance to join DeMille’s newly-formed studio left her on the outs with her director.

While good in drama, Joy was stunning in comedy. Eve’s Leaves and The Clinging Vine (both 1926) played with Miss Joy’s androgyny for fun and romance. Eve’s Leaves is the more charming of the two films with a faster pace and a more appealing leading man.

William Boyd is best remembered today as Hopalong Cassidy. During his career in silent film he was usually cast as a romantic lead in all-American boy roles. His part in Eve’s Leaves was more difficult that Leatrice Joy’s. He played a male damsel-in-distress without seeming spineless. Boyd is thoroughly charming in his part. Let there be no doubts, though, Leatrice Joy is firmly in control. Her wild and tough yet naive character is instantly endearing. Miss Joy gets the biggest laughs with her send-up of her own sexy image.

I should warn you that there are some unfortunate racial stereotypes in the film. The Chinese characters are utter stereotypes and the intertitles use the dubious “Asian” dialect that no actual person speaks. These are rather unfortunate and offensive elements and I do understand if they are too much of a hurdle to overcome.

The silent era has the reputation of being a sexist period of filmmaking. Young ladies tied to railroad tracks, sawmills, etc. waiting for the square-jawed hero to rescue them. While this is unfortunately true in some cases, the New Woman and the flapper culture resulted in more aggressive roles for women.

Gender bending comedies had been popular since the dawn of film but actresses like Bebe Daniels and Leatrice Joy made them some of the most entertaining movies of the late silent era. The genre was something like this: Take a popular plot and reverse the gender roles, maybe add a touch of cross-dressing, and the result was comedic fun. What makes these films of particular interest to modern viewers is that they offer a strong female character who wins by beating men at their own game.

Many classic films that portray strong female leads force them to either pay for their independence with a tragic ending or make them acknowledge themselves as the weaker sex by the climax. Films like Eve’s Leaves were different. The heroine got her way, her man and her happiness and no apologies were needed. The filmmakers were likely not interested in making a social statement and the situations were played for laughs but the fact remains that audiences were treated to formidable heroines portrayed in a positive light.

In the film, Leatrice Joy’s Eve not only manages to rescue herself, she saves her boyfriend as well. And all with quick thinking and a dose of cunning.

The folks at Grapevine Video have released this comedy on DVD.