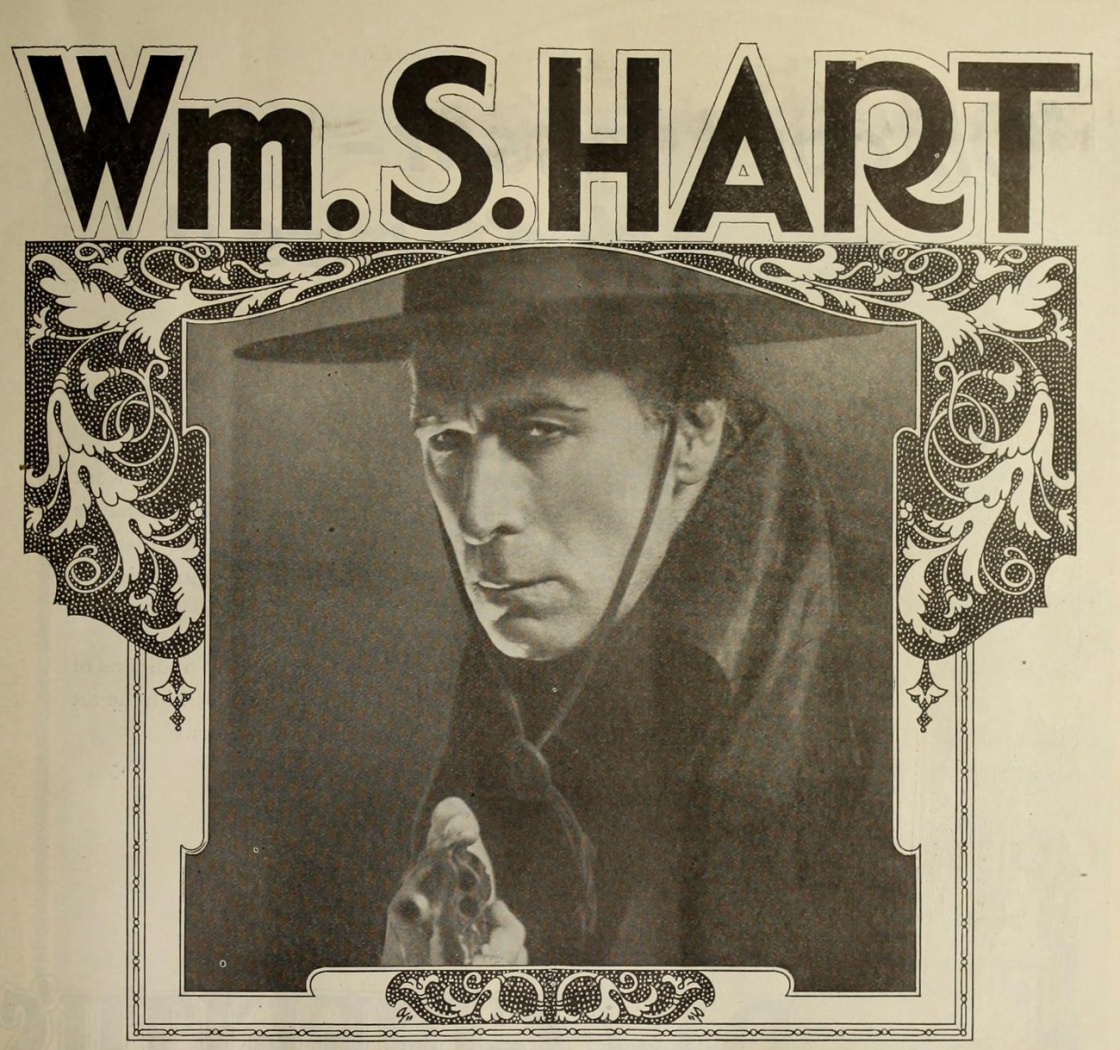 William S. Hart was fully in Good Bad Man mode in this short film. He’s a bandit whose profession loses him the love of his life… but he must strap on the six-shooters once again in order to save her from a slick con man.

This post is part of the Caftan Woman Blogathon in honor of Patricia Nolan-Hall, a dedicated champion of classic film and an all-around lovely gal. Paddy was a keen devotee of westerns, so reviewing something in that genre seemed an appropriate way to honor her memory. You can read a list of participants at Lady Eve’s Reel Life and Another Old Movie Blog.

William S. Hart was part of the wave of established stage stars who tried their hands at the new-fangled motion pictures in the 1910s. (Rumors that Hart moonlighted in the 1907 version of Ben-Hur are hooey.) While many of his theatrical contemporaries washed out of cinema, Hart’s celluloid success outshone his stage work and he quickly became known as the king of gritty westerns.

Hart didn’t invent the cinematic dark side of the west. Realistic, bloody westerns were being made everywhere from Oklahoma to France, but he deserved his title and association with his signature Good Bad Man character.

A Knight of the Trail was a typical release from Hart’s early days: a direct plot, some romance and plenty of opportunities for him to play the tough guy. Hart directed himself and I have seen mention that the scheming ne’er-do-well rival was played by none other than Frank Borzage, future romance director extraordinaire. Borzage was one of the stars of Inceville and while he was more of the leading man type at the time, it was not unusual for an actor to mix things up for variety. That being said, I am hopeless at identification and the transfer that I saw wasn’t super clear, so I am not going to make any definitive statements. (Though that head of curls is really Borzage-esque!)

In the film, Hart plays Jim Treen, the bandit terrorizing the local population of Anywesterntown, USA. Jim has also been courting Molly (Leona Hutton), the pretty waitress at the OK Restaurant (just okay?) and with his last robbery netting a tidy profit, he slips a ring on her finger.

Meanwhile, the nefarious Pat Carey gets a look at Molly’s bank book, sees that she has $805.20 in savings (that’s about $22,000 in modern money) and decides that such a nice round figure in such a nice fat bank account should really belong to him.

Molly accidentally stumbles onto Jim’s loot cache while cleaning his cabin and breaks up with him on the spot, despite his protestations that he meant to go straight. In despair, he mails his ill-gotten gains to the sheriff and watches sadly as Pat Carey becomes engaged to Molly and takes charge of her nest egg. (One nice character detail I noticed was that, in addition to the paper bills, Carey made sure Molly also gave him the twenty cents from her savings—the guy literally took her last dime!)

However, when Molly is left at the altar on her wedding day and the bridegroom —and the cash—are nowhere to be found, it’s up to a former bandit to use his old talents to track down the runaway groom. Will he succeed? And will true love win? See A Knight of the Trail to find out!

Like most of Hart’s work, A Knight of the Trail remained in circulation and—much to the chagrin of theater owners and fans—was retitled to look like a brand-new picture. It spent part of the late-1910s with the rather silly title The Prowlers of the Plains, which makes Hart and maybe-Borzage sound like old west peeping toms. The original title was restored for re-release but the title cards were replaced with something more modern in the early twenties and this re-release is the source of most home video transfers, which are themselves derived from safety film view-at-home prints.

As stated before, Hart wasn’t the first hard and nasty western hero but he was certainly influential. John Ford’s affection for the William S. Hart brand was apparent in his early pictures with Harry Carey, which mimicked the Good Bad Man formula and included some signature Hart scenes, such as the bandit looking at his own wanted poster with amusement. (Ford’s excellent feature debut, Straight Shooting, is essentially a Hart picture with the serial numbers filed off.)

Fans of O. Henry will likely recognize a few elements of A Retrieved Reformation, the 1903 Henry short story adapted multiple times as Alias Jimmy Valentine. In that story, a safecracker escapes the full weight of justice and remakes himself as a successful banker, denying his identity to the pesky lawman who comes around to try to arrest him. However, when a small child becomes trapped in the vault, he uses his skills to free her and thus confirming his identity to the lawman. Well, you can’t very well arrest someone after that, so Valentine is allowed to continue in his new life.

In the case of A Knight of the Trail, Hart’s character temporarily lost the woman he loved because of his profession as a bandit but embracing that profession allows him to save the day and her money, too. Sometimes, you just need a good thief around.

And, to be clear, Hart’s decision to go straight had less to do with a moral epiphany and more that his fiancée disapproved of his life of crime. Like Jimmy Valentine, Jim Treen’s reformation started with looking out for number one. And who knows? Maybe it was less Jim becoming an honest citizen and more Molly loosening up about a little light banditry.

The ambiguity of the picture is a big part of its appeal and, in fact, Hart’s appeal as well. “He’s reformed… kind of” led to many an exciting conclusion in Hart’s filmography, especially his features. Hell’s Hinges (1916) featured Old Testament vengeance of a fiery and decidedly unreformed nature and proved to be one of Hart’s most beloved hits.

A Knight of the Trail is simple, yes, but sometimes simple hits the spot. It was a building block for a career of Good Bad Manning and is highly enjoyable in that context. It’s also one of the building blocks of the classic western masterpieces that were to come and Hart’s influence on the later greats is always a fun topic to examine.