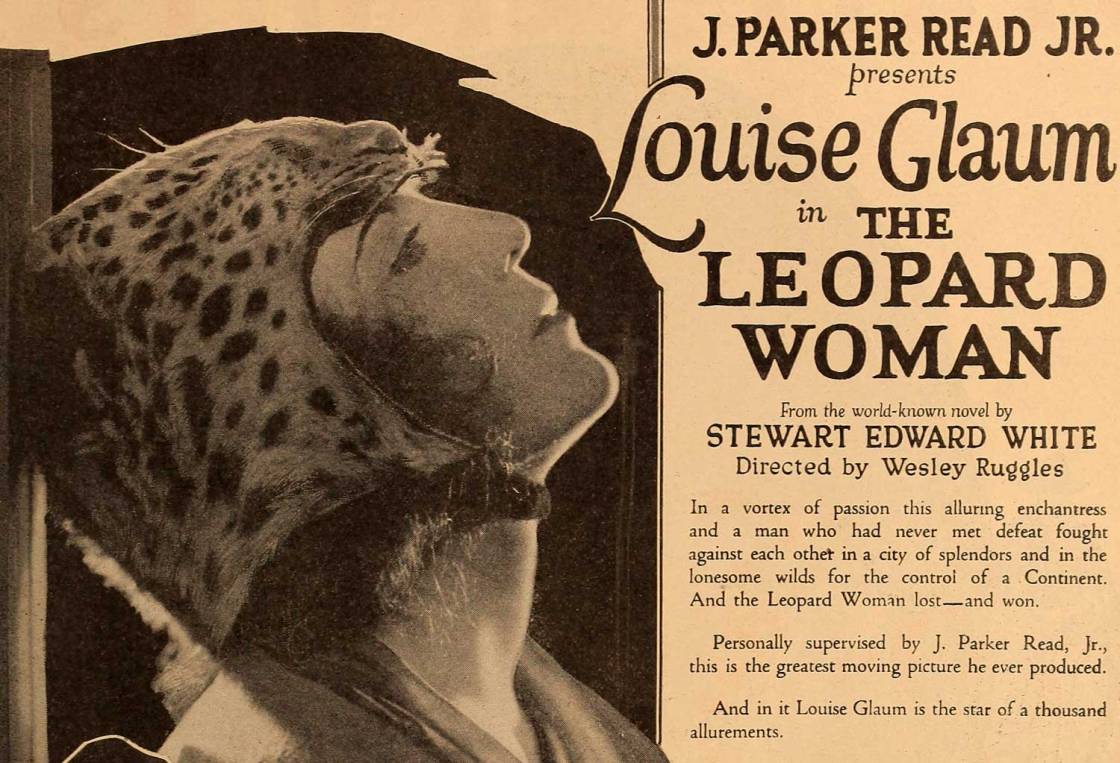 Louise Glaum and House Peters play a pair of secret agents on opposite sides of a Great Game being played out in Africa. They both pack their bags for separate safaris but Glaum plans to murder Peters for king, country and kicks.

If I only had a brain…

Of all the 1910s vamps, Louise Glaum was the best poised for success once the fad died out. Unlike her more extreme contemporaries, Glaum wasn’t about spiderweb jewelry and supernatural seductive powers. In her appearances as the resident femme fatale of William S. Hart westerns, her powers are strictly of the mortal earthly but she still managed to drag men to their dooms with unholy glee.

The vamp fad may have been short-lived but movies have always been open to letting the female of the species be more deadly than the male and Glaum scored a hit with a subtly-titled picture, Sex. The Leopard Woman was meant to build on that momentum with its desert location and steamy romance between political rivals.

The classic “hot spies from rival nations find one another irresistibly attractive” trope is beloved for a reason. You get romance, intrigue, danger… Or, at least, you should. The Leopard Woman never quite gets to that point.

Glaum plays Madame, a sizzling socialite who has set up her salon in Cairo and entertains the wealthy and the deadly. An Englishman named John Culbertson (House Peters) shows up and shows no interest in Madame, much to her irritation. He has been recruited by his government for a diplomatic mission, befriending a particular tribal leader before an unnamed rival nation can.

Madame is also an agent of her unnamed government and she has an assignment of her own: stop Culbertson by any means necessary, up to and including murder. Assisted by her servant Chaké (Noble Johnson), Madame sets to work.

But who does Madame work for? Assuming that this picture takes place in Anglo-Egyptian Sudan, it could have been Germany, France or Italy as all of those nations had some designs on the region. Germany is the most likely candidate given the time period (there were still a few Hate the Hun pictures post-WWI) and the use of the name Winkelman as one of the foreign agents.

Anyway, Madame hires a dancer/assassin to stab Culbertson in his sleep and I had a fleeting moment of hope that this picture would turn into something good. I don’t know about you, but I am always a sucker for beautiful and deadly dancer/assassins. But, alas, she fails in her mission, flees and is never heard from again in the film. Culbertson leaves early, Madame sleeps in, misses his departure and is forced to follow.

We are then treated to scenes of Madame and Culbertson’s opulent respective safaris, courtesy of their local employees schlepping all manner of luxury goods for them. Madame is in such a rush that she misses the all-important well and her team nearly dies of thirst before Culbertson shows up to save the day.

Madame is falling for her enemy but that doesn’t stop her from ordering Chaké to murder him. Chaké stabs his porter instead but Culbertson is still in peril. You see, he’s managed to blind himself in the sun.

I just want to stop right here and point out that I have not seen such incompetence outside of an infomercial. She misses an obvious waterhole and then doesn’t notice until it’s too late? He doesn’t realize that maybe he shouldn’t be looking at the sun during a safari? When Nature was handing out brains, this pair thought she said rain and they hid under the table. Honestly, it’s amazing they didn’t manage to prematurely start WWII with their bumbling.

The original novel by Stewart Edward White, who specialized in wilderness fare, was very much in the Great White Hunter genre and so the film was in trouble from the very start. Between the source material and the casting…

While the African characters are, thankfully, not white actors in blackface, they are treated as primitives whose lives are not nearly as important as the whims of the Europeans who interact with them. With the exception of Chaké, they are not treated as individuals and Culbertson’s murdered porter is completely forgotten once the noxious Englishman realizes that Madame is to blame. (Your regularly reminder that some silent era viewers did notice racist content, did object and, in some cases, managed to win concessions, edits and even managed to shutter a studio.)

Obviously, Noble Johnson was handed a thankless role and we can’t blame him for the results. There’s only so much you can do if the material doesn’t support you. Likewise, Louise Glaum’s performance isn’t terrible (it’s also not great with all its flailing histrionics) but her character is so poorly written that there really wasn’t a point to her trying. She looks great in her costumes, though.

But then we have House Peters. I groaned audibly when his name showed up in the credits. You see, the man cannot be normal onscreen for ten seconds. He spent most of The Captive with his hands down his own pants, he wandered through The Great Divide holding his hands like a kangaroo and his grinning performance in Raffles made his character seem either deranged, drugged or both. Long story short, I don’t get his appeal at all.

He’s not as goony in this film, thank heaven, but his character is so spectacularly unappealing that it almost doesn’t matter. Torture a guy to death for killing his porter but sentencing the woman who ordered the hit to… go on a date with him? Yuck.

The anti-charisma of Peters makes the subordinate position of Noble Johnson all the more difficult for the viewer to tolerate. Johnson had founded the Lincoln Motion Picture Company, the earliest known Black-owned studio in the United States. He paid the bills acting in studio pictures, where his handsome features and skill with makeup were assets in character parts. Johnson eventually resigned from Lincoln and continued his career as an in-demand performer in Hollywood for decades.

Like so many other talented performers, Johnson was cut off from the prime roles due to the systemic racism in the United States and its film industry. Obviously, we are in no position to judge Johnson or any performer obliged to choose between losing their career and taking stereotyped roles. The villains here were a racist society and its enablers. I just feel awful that the handsomest, most charismatic actor in the picture was forbidden from taking his rightful place.

(You can learn more about Johnson’s early career in Jacqueline Najuma Stewart’s Migrating to the Movies: Cinema and Black Urban Modernity, which covers Black filmgoers and filmmakers in detail and is highly recommended reading.)

The Leopard Woman was shot around Palm Springs, California in August, which is absolutely insane. Movie veterans tend to exaggerate the weather conditions they endured during filming but descriptions of people fainting in 120-degree weather are quite believable in this case. Temperatures of up to 126 have been recorded in that vicinity in July and August and I cannot imagine what the production company thought it was doing sending their people out there like that. Heat stroke is bad enough but to suffer heatstroke making a stupid movie has got to be worse.

The film enjoyed a lavish ad campaign but both Film Daily and Motion Picture News panned its sloppy plotting. Exhibitors Herald, on the other hand, praised the picture unstintingly, drawing particular attention to Glaum’s wardrobe. Camera sniffed at the whole affair and wrote the picture off as “tommyrot,” which I have to agree with.

Even negative reviews lavishly praised the costumes, sets and lighting, so it’s a shame that the only releases of the picture are derived from a faded and battered print. The Library of Congress has a complete 35mm print, so it’s possible we will see some of that acclaimed extravagance someday.

Glaum’s career did not last long after this picture. This vamp wasn’t brought down due to backlash against a fad but rather mundane things like breach of contract and lawsuits. It’s a pity because she really was better than The Leopard Woman and was capable of glorious villainy when given the right material.

The Leopard Woman is basically for House Peters or Louise Glaum completists and nobody else. While the vampish costuming is interesting, it doesn’t make up for the layers of sheer awfulness. Viewer beware.