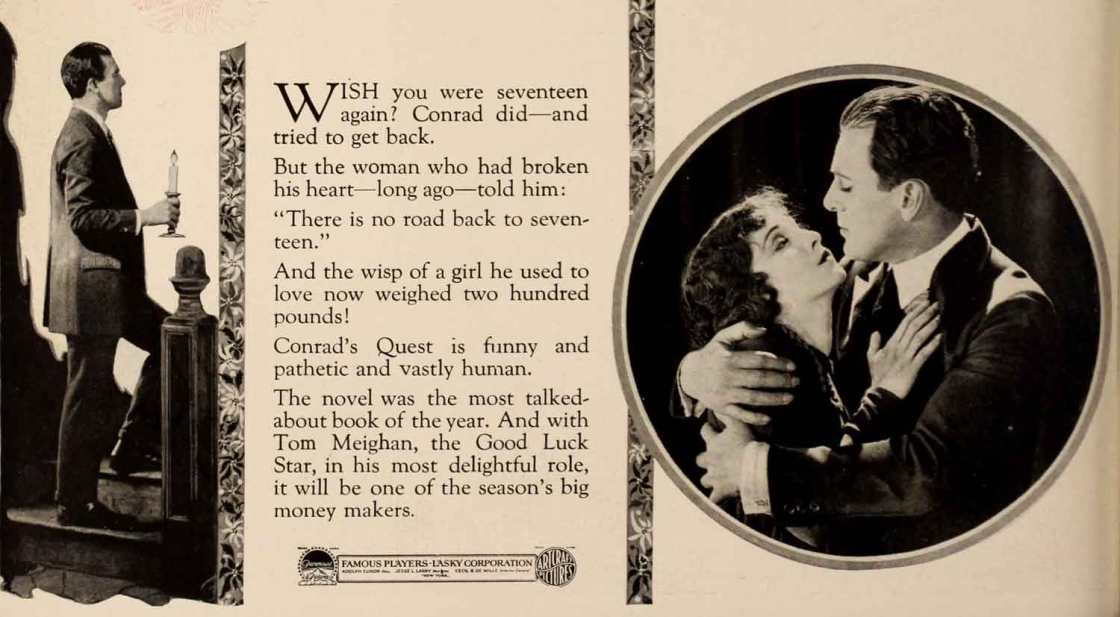 Conrad in Quest of His Youth (1920) A Silent Film Review

A wealthy gentleman of a certain age returns home from a stint in the army and finds himself plagued by ennui. To combat this feeling, he sets out on a quest to find people from three sections of his youth: his childhood playmates, his first love and the older woman who swept him off his teenage feet.

The low survival rate of William de Mille’s films is one of the great tragedies of silent cinema. Understated where his young brother, Cecil, was bombastic, the elder de Mille (small “d”) is most often mentioned in comparison to the younger. This was an issue even during the silent era and William proclaimed that he didn’t like being used as a cudgel against his brother.

Miss Lulu Bett is de Mille’s most famous film and it has aged well, its story of a used and abused penniless “spinster” growing a spine and finding herself is as touching today as it was back in 1921. Conrad in Quest of His Youth was released the year before Miss Lulu Bett but it similarly explores self-discovery.

Of course, the difference is that Conrad in Quest of His Youth is about a thirty-something man who was born into affluence and still has his money, he just feels meh. That is a pretty hard concept to sell to me in the best of times but 2020 is a particularly unfriendly atmosphere. So, let’s see how it fares.

The picture opens with Conrad Warrener (Thomas Meighan) returning home from war and feeling pretty empty. I spent much of the film shouting “Undiagnosed PTSD!” at the screen every time the title cards mused about Conrad’s listlessness but it is quickly established that the source of Conrad’s troubles is not trauma but a deep satisfaction with his life. He looks back on his youth and wants to recapture the experiences that he enjoyed. Ably assisted by his valet, Dobson (Charles Ogle), Conrad begins with his childhood.

His first order of business is to open up the country home where he had good times with his three cousins when they were all small children. Nina (Mabel Van Buren), Gina (Mayme Kelso) and Ted (Bertram Johns) all have lives of their own but they are intrigued by Conrad’s invitation to experience the good old days.

Nostalgia is a funny thing and can curdle quickly. We live in a time when people rant and rave about sequels “ruining” their childhoods and adults complain about the presence of children when they are watching a children’s movie. That’s pretty similar to Conrad dragging adults entering middle age out to the country to sit on half-size furniture and eat the exact meals they enjoyed as kids. It’s fun to have tastes of nostalgia but it grates quickly if the dose is too high.

Such is the case with Conrad’s cousins. What should have been a twenty-minute dip into reminiscing turns into a nightmare evening of forced whimsy. Sitting in their child-size chairs by the fire, eating porridge and milk, playing the 1920s equivalent of Candyland when they really want bridge. Their childhood beds don’t fit their adult frames and the leaking roof is an annoyance rather than an adventure.

Most of us have experienced this to varying degrees when an old childhood favorite pales in comparison to the memories. Anyway, his guests take the very grownup escape route of calling for a taxi the next morning before he can take them fishing in the old swimming hole.

This sequence succeeds because it is played well by the performers and because the film makes it clear that the enthusiastic Conrad has annoyed rather than delighted his cousins. Nina, who was feeling her own sense of ennui, sympathizes with him but she departs with the others.

Alas, the same cannot be said of the next sequence. Conrad remembers his first love, a dainty slip of a girl, who presented him with a book and became his very first love. Surely, she will hold the key to his happiness, so he goes to call on her.

Conrad is dramatically horrified when he discovers that his tweenage sweetheart has decided, twenty-five years later, to marry, have kids and, sin of sins, that she put on weight. This sequence is a bit mean spirited with Conrad marveling at his onetime love’s new situation. I don’t know, she seems to have grown up to be a warm person who loves her children and her husband, lives comfortably and she certainly isn’t wandering around trying to see what her ex-boyfriends are up to. (Sips tea.)

It just comes off as a bit unpleasant, especially since the reveal of Mrs. Barchester-Bailey is treated like a hilarious punchline. The problem here is that she and not Conrad is presented as the ridiculous one. He shows up at her door decades later for what exactly? He expected to see her suspended in amber, but she has moved on and is happy. And if she had been thin when he found her, did he expect her to drop everything to soothe his midlife crisis? Fortunately, before he can reject her, she rejects him, explaining that her husband is terribly jealous.

After that alarming misstep, the strongest sequence of the film comes next. Conrad decides to seek out the older woman and probable adventuress who swept him off his feet in Italy but who refused his youthful proclamations of love. He goes and finds Mrs. Adaile (Kathlyn Williams), who is still lovely but is feeling her own loss of youth.

Kathlyn Williams, when she is mentioned at all, is generally listed as a serial queen because she starred in the groundbreaking cliffhanger The Adventures of Kathlyn. However, I have developed quite a bit of respect for her dramatic chops over the years and she often managed to walk away with the entire picture even if she had a supporting role. The Whispering Chorus and Sweet Alyssum both showcased her prowess and she is just as good here.

Like Nina, Mrs. Adaile sympathizes with Conrad and unlike Nina, she is willing to go all the way with his plans and agrees to a mad night of passion with him. He leaves his balcony door open like a properly discrete lover and waits for her. She dresses in her finest and goes to him… only to find that he has fallen asleep. She recognizes the whole situation for the dream it was and leaves him an affectionate but firm Dear Conrad note.

Williams plays the scenes beautifully. You can see her perking up at the idea of recapturing what she had and then her sorrow and her self-deprecating humor when she realizes it is not to be. Nothing stagy or overwrought, just sensitive pantomime. There’s a lovely moment when she is dressing for her tryst and applies perfume. Then she hesitates. Should she? She decides she should and perfumes her lips. A small business but it speaks volumes about the character.

Conrad in Quest of His Youth is a mixed bag, overall. The country cousins sequence and the Italian sequence are both funny, ironic and sorrowful and do a great job of conveying the dangers of trying to bring the rosy past into the present. The first love sequence is just mean and the final sequence is among the weakest, especially coming on the heels of the Italian scenes.

Conrad returns to England unsure of what to do next when he runs into a troupe of struggling actors and decides to play fairy godfather. He meets the chorus girl Rosalind (Margaret Loomis), who is actually a countess who is seeking out her own youth by slumming with her old acting chum. Has Conrad finally found his match? See Conrad in Quest of His Youth to find out.

While this picture has some strong moments and strong performances, I can’t say that it completely won me over, though I have never been particularly crazy about films in this genre.

The pace is deliberate and allows for much introspection and de Mille guides his performers with a sure and steady hand. Kathlyn Williams, Mabel van Buren and Charles Ogle are all particularly good, looking on Conrad with sympathy and humor as he embarks on his quest. It’s just that I probably would have enjoyed movies with any one of their characters as the main subject of interest.

Thomas Meighan does what he can with the part, he was nothing if not solid and reliable, but I wonder if the picture would not have benefited from a slightly sillier performer, someone like Creighton Hale or Wallace Reid, who tended to pull off comedy a bit better. (Reid did something very similar in the 1921 film The Affairs of Anatol, directed by Cecil B. DeMille. His character’s crisis was that he did not know if he was satisfied with being married to Gloria Swanson. Yeah. Anatol makes Conrad look positively sensible by comparison.)

While Conrad in Quest of His Youth positions itself to poke fun at the title character’s follies, he is still the main character of the thing and treated with a certain amount of seriousness that I am not sure is warranted, possibly due to the casting of Meighan. And, really, it all comes down to an independently wealthy fellow feeling a touch of ennui.

I wanted more. More drama, more humor, more tart observations, especially from the finale. Maybe a tragedy to reawaken Conrad or a moment of personal reflection or something other than what we got. This is a character study after all and it’s not much fun to go around in circles.

(Spoiler: So, basically, Conrad finds happiness in the arms a much younger woman who shares his brand of malaise. Personal growth? Nah.)

Conrad in Quest of His Youth turned out to be a mixed bag with some sections being much stronger than others. The childhood home sequence and the Italian sequence work the best, while the childhood sweetheart sequence and the final wrapping-up don’t quite do it for me. William de Mille’s light touch is, as ever, appreciated but I think this is likely a case of “your mileage may vary.” If you like films covering this topic, you will probably enjoy it more than I did.