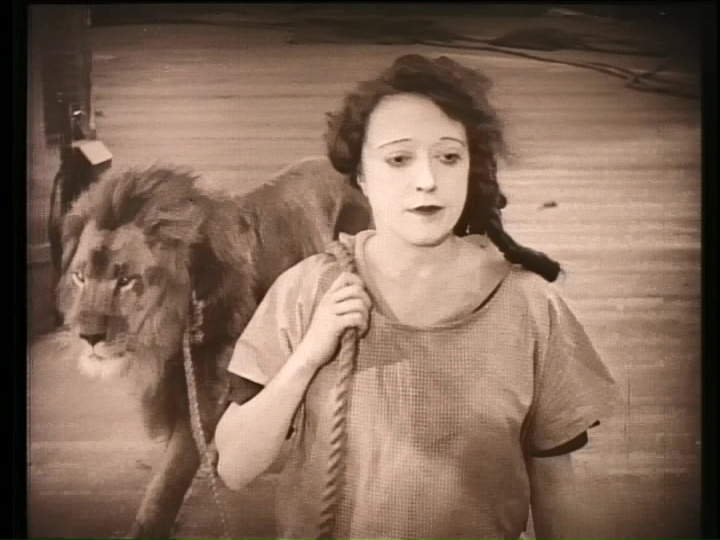 Mabel Normand plays a moviestruck small town girl who leaves the boy she loves (Ralph Graves) for a chance to make it big in Hollywood. Naturally, chaos ensues, especially when she mixes up a Great Dane and a lion…

Mabel Normand first found movie fame under Mack Sennett’s comedy banner where she could run, jump and fall as well as any of the boys… in heels and a corset! She was one of the first comedy director-stars of any gender and she taught Charlie Chaplin the cinematic ropes. She scored a blockbuster in the feature film Mickey and left Sennett at last for Goldwyn but things didn’t go as well as she could have hoped and so she returned to the Sennett fold. (Goldwyn had similar problems creating suitable star vehicles for Mae Marsh and infamously derailed Anna Sten’s entire career with hemming and hawing.)

The Extra Girl is all about endings. It was the last film Normand made with Sennett and the second-to-last feature she made at all. After a hiatus from films she had a brief stint with Hal Roach and succumbed to tuberculosis in 1930.

In the years since her death, Normand’s legacy has been hijacked by self-serving co-workers (most notably Sennett and Charlie Chaplin, I break down most Chaplin’s nonsense in my review of Mabel at the Wheel) and snickering gossip-mongers.

Did you know? Did you hear? Well, it’s no surprise, is it?

We’re not doing any of that here. Mabel Normand was pure cinema talent and we are going to focus on what matters: the movie. No shooting chauffeurs, no William Desmond Taylor, just Mabel and the movies. Well, that and discussing how we can turn the conversation back to Normand’s impressive talents instead of prurient gossip.

The plot of The Extra Girl should be familiar. Normand plays Sue Graham, a sweet small town girl who dreams of cinematic stardom and has her stills all ready to send to the film studios. The boy of her dreams is David (Ralph Graves), her darling since childhood. However, her father (George Nichols) wants her to marry the local pharmacist, Aaron Applejohn (Vernon Dent).

Sue’s submission to a movie beauty contest is all set to go when she is forcibly engaged to Applejohn but a local troublemaker substitutes the photo of a model from a candy box in order to assure that Sue leaves town. Unsurprisingly, Sue wins the contest and David helps her catch the train to Hollywood.

Once the studio heads realize that she does not match the submitted photo, Sue’s film career is bust but she is given a job in the wardrobe department. Chaos ensues as Sue trips, falls, goes through an entire film test with a handprint on her backside and, most famously, mistakes a real lion for Teddy the Wonder Dog in disguise and lets him loose in the studio.

Meanwhile, both David and her parents have followed her to Hollywood and a sleazy conman (Ramsey Wallace) is out to bilk her family out of their life savings.

Spoiler: Irritatingly, The Extra Girl reflects the notion of its time (and which is still spouted as “wisdom” today) that a woman faces a choice: motherhood or career. One or the other, not both. Obviously, there is nothing wrong with someone choosing either path full-time but plenty of women had to do both back in 1923. The myth of all old-timey women being happy housewives is pure social propaganda. Women have always worked. You see waitresses and retail workers and factory workers in old timey movies, they can’t all be single.

(Here’s an amusing anecdote. My mother’s school district in Ohio did not allow married women to be teachers, as was common at the time. However, they could be substitute teachers and darn if some substitutes didn’t stay in place for an entire school year. And the next. And the next. A clever way around a ridiculous rule that meant losing talented and experienced educators but it’s a shame it was needed at all.)

However, this film is an overall delight. It is smoother and better written than Mickey and the glimpse backstage is particularly enjoyable. Normand shows once again why she is a star with an engaging and engagingly goofy performance. While the lion sequence is justly praised (Normand attempts to beat him back with a feather duster) I also enjoyed the screen test for its simple-but-hilarious concept. Sue accidentally sits on a workman’s glove, which leaves a distinct print on her white pantaloons. Normand makes the most of her costume, flipping her hoop skirt and adding just enough exaggeration to her flouncing.

I am not generally the biggest Ralph Graves fan but he employs a light touch here and has genuine chemistry with Normand as her loyal boyfriend. (Though why he helps her go to Hollywood and then follows her to tell her to give up on her dreams of a career I will never know.) George Nichols and Anna Dodge are fine as Sue’s parents, though I would have liked more tender family scenes at the beginning. Most of Sue’s interactions with her parents are negative (“You must marry Applejohn!”) and so her loyalty to them doesn’t come across as it should.

The early scenes in the small tow of Riverbend are sometimes described as purely dramatic but I think there are enough goofy antics to keep Normand fans happy. Actually, what surprised me most about this film was how realistic and serious the fight scenes were. I was expecting more pratfalls and such but these things get nasty.

Obviously, the backstage stuff is the main draw for this picture and it’s great to see Teddy again but there are also delightful little surprises that don’t make the previews. Sue practicing her movie acting, Sue and David bursting in to recover her father’s money, there are all sorts of small pleasures in this charming film. And this level of subtlety from the inconsistent 1920s Sennett brand is both a happy and welcome surprise. (Sennett’s 1920s stuff is often frenetic and aggressively unfunny, though there are notable exceptions like Raymond McKee’s Smith Family series and several Harry Langdon shorts. In all fairness, I should mention that slapstick is not my cup of tea.)

Spoiler: I also enjoyed the fact that Sue’s career never really takes off, which is a refreshing change from the usual Merton of the Movies plot. And, frankly, that’s what happened to 99% of the Hollywood hopefuls.

Now I have to get a little ranty because, truth be told, I am hopping mad.

You may know that I have a policy of not discussing the personal lives of stars if I can avoid it. (I make exceptions for actors like Mildred Harris who are basically defined by myths about their personal lives, their onscreen talents eclipsed.) My reason is that these discussions usually ignore the movies and turn into 1920s TMZ. Sorry, I’m here for the movies. If a reviewer covering a modern film were to spend half the thing repeating gossip about the star’s love life, they’d be laughed out of the profession and rightly so. I am hoping to show silent films the same respect.

The Extra Girl is a perfect example of why I feel this policy is sound. Review after review, discussion after discussion of this film frames in a crying little clown narrative. Normand is described as looking “tired and a bit gaunt” and that “her energy is lacking, and the effects of the anguish and trauma she’d been suffering are again all too evident. There is at times a discernible air of sadness about her.”

A woman with over a decade of acting experience under her belt acts less hyper in her later films. No news here. And as for the “gaunt” appearance, I would like to remind everybody that Normand suffered from tuberculosis and she herself stated that she was unwell during the production. Add to that the hounding press and you have a recipe for stress. Most of the people making pointed remarks about her looks do not mention this, leaving readers to assume that she had more sinister reasons for possessing more pronounced cheekbones. (Believe me, I have heard it all and I am not about to repeat it.)

See, my problem with all this is the way it is framed. Many writers have put everything about Normand’s performance down to scandal or addiction instead of a trouper trying to create more subtle comedy under challenging circumstances. For contrasts, please note that 1923 reviews of the film refer to Normand as wistful and the humor as natural and unforced. Photoplay stated that “She is one of the actresses that the screen cannot spare. Few have her freshness, her piquancy, her gift for comedy.” One review did describe her as “white and worn” during some sequences but the general consensus was that the old Mabel was back.

Silent movie fans are constantly fed scandal and rumors and so it can sometimes be difficult to prevent this from coloring our perception of a film. I have to say that I am in agreement with the reviewers of 1923: Normand is natural, funny, charming and this is easily one of her best features. (I am not a huge fan of Mickey, truth be told.) To suggest that her acting is more subtle merely because she was ill at the time does not give enough credit to this talented pioneer, methinks.

This smirking obsession with Normand’s personal life is both annoying and sexist. We manage to discuss Chaplin’s comedy without constantly bringing up his child brides. We watch Keaton films without rehashing his messy divorce. We enjoy Lloyd without a slideshow of his, ahem, mature photographic subjects. Why? Because the movies are what matter, especially since this material is not part of their acts. (Like, if Chaplin were to constantly make boudoir comedies centering on divorce it would be different.)

Roscoe “Fatty” Arbuckle, Normand’s frequent co-star and close friend, is similarly treated as a sideshow by ignorant viewers but at least he has ardent defenders. (But can we not slut-shame Virginia Rappe whilst defending Roscoe, hmm?) Normand needs a similar defense mounted. Look, I don’t mind some discussion of what was happening in her life but that seems to be the only thing a significant percentage of film writers can think about.

As Simon Joyce and Jennifer Putzi put it in their excellent profile of Normand:

“Even after her death, scholars have been more interested in the gossip surrounding Normand’s life and romances (including an announced marriage to Sennett in 1915 that never materialized) than her work… Scholars would do well to refocus attention on Normand’s distinctive contribution to early cinema and slapstick comedy, as well as the nature of her directorial work for Keystone.”

The Extra Girl is the kind of movie Mabel Normand deserved to make. A little sweet, a little wacky, a lot of fun and plenty of room for Mabel to be Mabel.

Released on DVD by Kino and on Bluray by Flicker Alley as part of their Mack Sennett collection.