Welcome back! I am cooking my way through the 1929 Photoplay Cookbook. This time, I am going to be preparing cookies from one of the popular child stars of the silent era, one with a modern superhero connection.

Catch up on all of my taste tests here.

Frank Coghlan, Jr.– better known as Junior Coghlan during the silent era– starred in major DeMille productions, made the jump to sound and kept on playing kids and teens until he aged out of the roles.

Chances are, though, that you’ve probably heard of Coghlan in his role as Billy Batson a.k.a. Shazam’s secret identity. Coghlan starred in the 1941 serial with fellow silent veteran Tom Tyler handling to superhero stuff. (There’s new Shazam movie AND a Captain Marvel movie being released next year but if you want to untangle the legal knot that led to this, you are on your own.)

But here is the big question: did this recipe help Junior Coghlan develop his superpowers? Let’s find out! 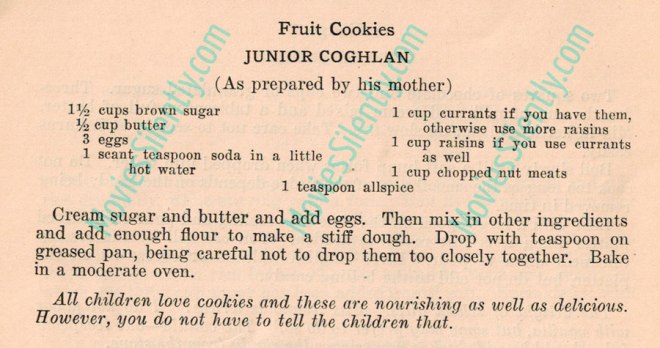 Let me just say that the 1920s had a weird idea of nutrition. Yes, we’re getting dried fruit and nuts but this thing also has a fair portion of sugar and butter. Health food these ain’t.

Currants are not easy to come by in my neck of the woods so I decided to substitute dried apricots, one of my favorite dried fruits. I also used a golden raisin/dried cranberry/dried sour cherry blend instead of just plain raisins. Walnuts were my nut meats of choice but pecans would also be delicious, I think.

I HIGHLY recommend getting your fruit and nuts in bulk because those tiny packages at the supermarket will bankrupt you otherwise. These can be pricey cookies if you don’t shop around.

Add the sugar and beat until well combined

Add the eggs one at a time, making sure to incorporate each egg before adding the next

Easy! I was left with a batter to which I added the baking soda (forgot to dissolve it in hot water), the allspice and the fruits and nuts.

Now we come to the tricky part of the recipe. Junior’s mom does not tell us how much flour to use, just that we should use “enough” which is not extremely specific. I got out my handy kitchen scale and measured out flour in half-cup increments, which I added to the dough. (I mixed by hand because I didn’t want to toughen my cookies.)

And the answer to how much flour is enough: Two cups. You may need slightly more or less so I suggest you mix the flour in half-cup increments as I did in order to make sure everything is well combined.

I didn’t grease my pan because I lined it with non-stick foil but you will obviously want to grease things up if you’re not using parchment or a baking sheet liner. 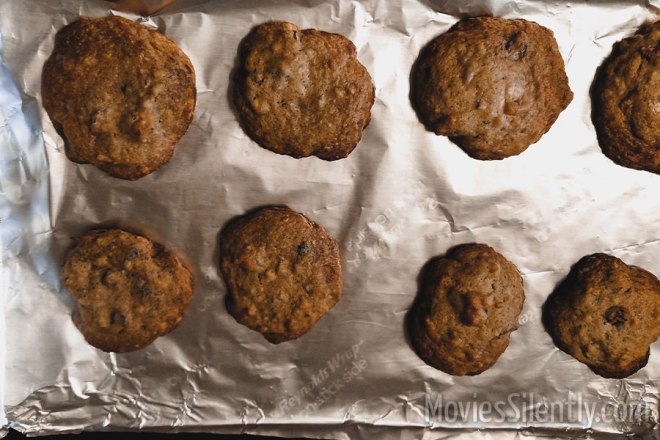 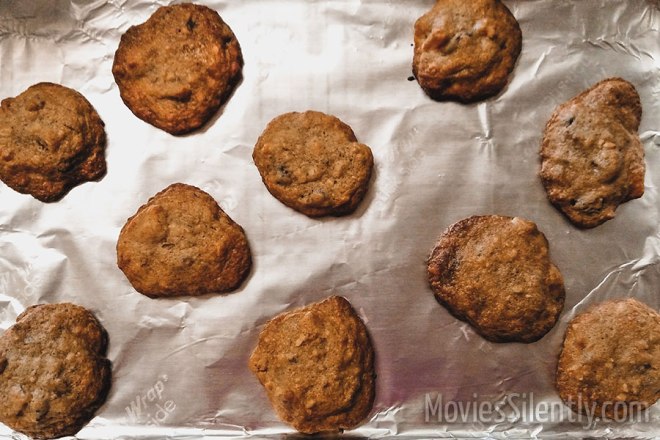 My cookies were done to a turn after nine minutes in a 350 degree oven. I recommend following Junior’s mom’s advice and using a teaspoon to drop the dough on the sheet as larger cookies get burnt on the bottom before the centers are set.

Score: 5 out of 5. Well done, mom! I was worried about these being too sweet as the batter was a bit sickly but the astringent walnuts and tangy fruit balanced the flavor out beautifully. People asked me if I used molasses in the recipe and while commercial brown sugar does contain some, I think it is the rich flavor of the allspice, fruit and nuts the creates the illusion. The texture is more on the cakey side, which works with the chewy fruit and the crunchy nuts. 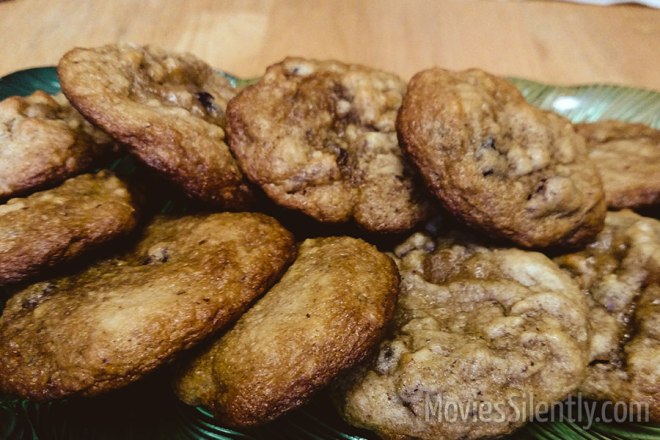 These are some grade-A old-fashioned cookies that can be customized to please just about everybody. They’re perfect for your next superhero movie viewing party or other Shazam-related activity and they’re positively delicious, especially with a nice cup of tea. (I had mine with Republic of Tea’s Blackberry Sage and it was deeelish!)

However, I must say that two would-be tasters had to be rejected because, well, raisins are lethal to them and I want them to be safe. They did not see it that way.

Obviously, you can make these vegan with the plant-based “butter” of your choice and whichever egg substitute you prefer. I’m thinking applesauce would go quite well in these.

No matter how you prepare them, enjoy! (And SHAZAM!)