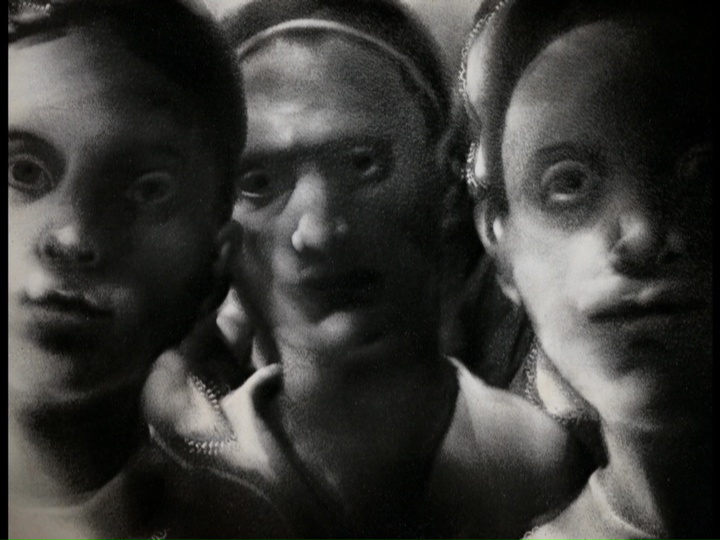 Here and the Great Elsewhere (2012) A Silent Film Review

A rare and beautiful animated film that makes use of the pinscreen, which essentially creates engraved images for the screen. A time-consuming technique but the results are worth it.

The story of the pinscreen is as fragile and ephemeral as the art it creates. Invented by Alexandre Alexeïeff and Claire Parker, it is made up of hundreds of thousands of tiny tubes that contain fine pins. When the pins are pushed back and forth from either side of the screen, their shadows create blacks, whites and shades of grey. The result rather looks like engraving, which was Alexeïeff’s goal.

(I have reviewed the Alexeïeff-Parker animated short The Nose if you want to see the original masters at work. I also go into much deeper detail on the mechanics of the pinscreen and the techniques employed by its creators.)

There have never been more than a few pinscreens in existence, the technique is simply too involved and time-consuming for commercial animation houses. The National Film Board of Canada obtained one in the 1970s and invited Alexeïeff and Parker to hold workshops. After the deaths of its creators, the other pinscreens fell into disuse but the NFB pinscreen remained active under the stewardship of Jacques Drouin.

Drouin’s successor is Michèle Lemieux, an illustrator and animator whose pinscreen film is the subject of today’s review. 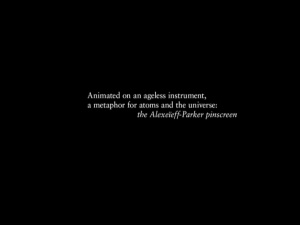 Here and the Great Elsewhere (Le Grand Ailleurs et le Petit Ici) does not have a plot, not really. Rather, it is a series of tableaus on the theme of destruction, creation, confinement and escape. An ordinary man sits in a room with no corners and he seems content but then he begins to venture out into the Great Elsewhere.

We are shown flashes of the man’s life, his loneliness and isolation and the things he has acquired along the way. Images of the old days, his ancestors? (We were earlier shown a Big Bang in miniature.) Walls spring up and faces close in, staring at the man or are they staring at us? We aren’t given long to meditate on them before we are whisked back to the room. A tiny flying vase zips inside with us and begins to deconstruct and absorb the man’s belongings, reducing them to their atoms and slurping them up. Finally, the room itself dissolves and we are left with the man and the Great Elsewhere.

The pinscreen the Lemieux uses has a mere 240,000 pins (larger screens can have over a million) and she makes the tool itself an integral part of Here and the Great Elsewhere. Pins fly about, figures dissolve into their component pins and at the end, the camera pulls back to reveal the pinscreen frame. The confinement of the animation tool is reflected by the confinement of the film’s main character.

By its very nature, pinscreen animation demands destruction. In order to move onto the next image, the artist must wipe the board clean (Alexeïeff and Parker used a roller) and begin again. Images can be recreated, of course, but they will never be exactly the same.

Lemieux’s film was inspired by her first encounter with the pinboard. In an interview with The Atlantic, she states that: “It gathers together to create life just as particles gather together to create life. I could see the metaphor in front of me, that the universe is inside of this instrument.” She embraces the boldness required to succeed in pinscreen (you can’t sketch out your basic image, for example, but must dive in head first, no take backsies) and constantly reminds the audience of the destruction and rebirth inherent in the medium.

Speaking of rebirth, with the help of Alexeïeff’s only daughter, Michèle Lemieux arranged for the repair and restoration of a second pinscreen in France. In one fell swoop the number of active pinscreens in the world has doubled. Okay, so it’s only two but the technique very nearly died so we can be grateful for small victories. Life imitates art in wonderful ways sometimes.

The great beauty of the pinscreen is that it encourages use of found objects in creation. Alexeïeff and Parker used a Chinese soup spoon, half of a matryoshka doll and anything they came across that had an interesting texture. Like stop-motion, the animation remains very much in the physical world, open to the kind of happy accidents that are harder to come by with a more controlled medium.

Lemieux brings her eye for detail, so valuable in illustration, to the film, creating frames within the pinscreen frame, lamps and tables and chairs but also volcanoes and bacteria-like creatures that would not be out of place in a Jim Henson puppet show. Alexeïeff’s animations remained rooted in Russian culture, it was from that source that he drew inspiration and fed his imagination. Lemieux takes a more abstract approach, questioning the very nature of the creative process.

Lemieux extensively sketched out her ideas for Here and the Great Elsewhere but also allowed the pinscreen to lead the way at times. “It’s not a technique. It’s much more parallel to a music instrument. It has its own mechanics and you have to find out the way to work with it, and it doesn’t always do what you want it to do.” 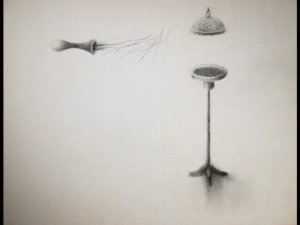 With visual storytelling, the music can make or break the film but Here and the Great Elsewhere features a delicate, haunting score from Robert Marcel Lepage (adapted from a composition of Armand Amar), which supports and enhances the images. There are also limited vocal effects and sound effects but no decipherable dialogue, which makes this a true modern silent film.

Here and the Great Elsewhere is a fascinating meditation on the very heart of animation. It also displays enormous technical virtuosity using a difficult and fussy animation tool. Highly recommended for anybody interested in animation off the beaten path.

Here and the Great Elsewhere has been released on DVD. It is also available for free and legal streaming on the NFB’s website and official YouTube channel.