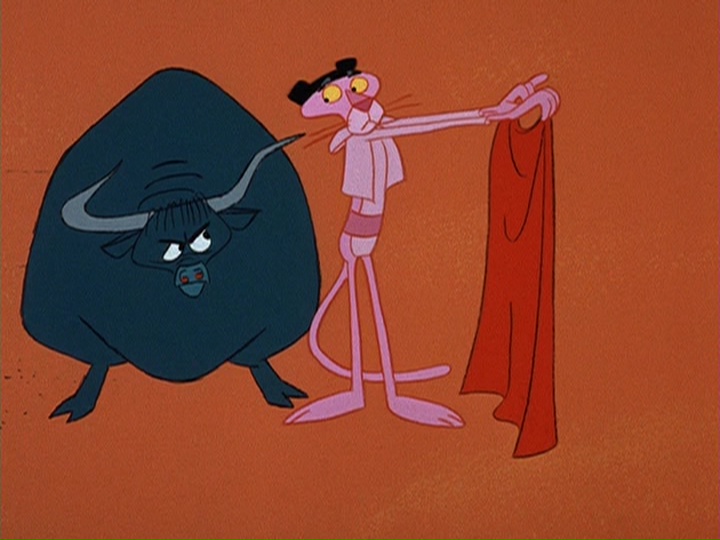 The Pink Panther dreams of becoming a toreador but lacks the necessary red cape. When he swipes one from a magician, his dream comes true but he has to deal with strange happenings and a grumpy bunny rabbit.

It’s worth remembering that silent cinema never really died in the world of animation. Voiceless comedy was accepted without question in the off-kilter reality of classic cartoons and anyway, many of the top animators came of age during the golden age of silent comedy.

The most famous (mostly) voiceless cartoon series is like Coyote vs. Roadrunner but I dare say that the Pink Panther is a close second. Termite Terrace veteran Friz Freleng was engaged to animate an elaborate credit sequence to open Blake Edwards’ caper comedy The Pink Panther in 1963. The Pink Panther character proved to be so popular that he was given his own series of standalone cartoons, most of them silent.

Pink was one of my favorites as a kid and I’m not ashamed to say that I pop on one of the classic cartoons when I need something light, fun and stylish. Friz Freleng and Henry Mancini? How can we lose? Freleng produces and veteran animator and director Hawley Pratt takes the reins for this pink outing.

Bully for Pink was the last Pink Panther cartoon released in 1965 and relies heavily on popular entertainment tropes to tell its story. Pink dreams of becoming a toreador and he has everything he needs except for the iconic red cape. He is depressed but quickly perks up when he sees a magician walking along. One quick theft later, Pink is ready to make his debut in the bull ring.

Of course, nothing is as smooth as our panther could have hoped. The bull is cute but he’s also in no mood for games, the cape seems to have mystical powers of its own and then there’s the small matter of the little white rabbit that lives in the cape…

The story is thin but it keeps moving and I truly appreciated the lack of malice involved. Even the bull is kinda sweet near the end. (Okay, the rabbit stays grumpy throughout.) In bullfighting-based entertainment, I have only one requirement: the bull needs to win. While it’s not really a victory here, everybody is so relieved about getting back to normal that all the characters get something like a happy ending.

(The cartoon was supposedly remade as Toro Pink in 1978 but that short eliminates the magician’s cape from the story, lacks the sweet tone of Bully for Pink and actually lifts more gags from the acclaimed Bugs Bunny short Bully for Bugs. Plus, the bull isn’t cute. Boo!)

Wait a minute, this short has sound effects and music! It’s not silent!

First of all, meet the American Fotoplayer. Second, silent films released in the leadup to (and during) the talkie revolution often had synchronized scores that included sound effects, inarticulate shouting, vocal music… everything, in fact, except talking. (You can hear examples of this in Show People, The Trail of ’98, Don Juan, Sunrise, The Man Who Laughs and other films released in the mid- to late 1920s.) This cartoon in very much in that tradition and none of the characters actually speak.

Excuse me if I seem a bit surly on this topic. I’ve had quite a few conversations with people who refuse to accept that silent movies can have sound effects, which is as irrationally pedantic as insisting that “talking pictures” can have dialogue but not music. Oh, these fellas must be heaps of fun at parties. “Um, excuse me, hosts, but this says ‘onion dip’ when it clearly also contains sour cream.” (The phrase “mute cinema”, which is used in many languages to describe silents, seems much more apt.)

But more importantly, Bully for Pink is a pristine example of a mid-century cartoon that takes the grammar of silent film and develops it into wordless storytelling sans title cards. You see, quite a few silent film directors considered intertitles to be an irritating distraction that broke the flow of their films and some managed to all but eliminate them.

In fact, I would say that wordless cartoons like the Pink Panther and the Looney Tunes classic Much Ado About Nutting are blueprints for anybody who wishes to make a modern silent film. Too often, filmmakers gets caught up in turning things sepia, adding way too many title cards in old-timey vernacular and acting goofy when the real key to success is communicating as wordlessly as possible.

There have been attempts to give Pink a voice over the years but they haven’t lasted. As Mary Pickford would put it, it’s like putting lipstick on the Venus de Milo.

(By the way, some commenters have been complaining that the cute bull in Bully for Bugs sounds too much like an elephant. While that may or may not be true, I would like to point out that angry bulls sound like trumpets or oversized babies so maybe an elephant isn’t too far off.)

Let’s examine some of the ways that Bully for Pink manages to do this.

Select Visual Information: We don’t need Pink to explain or burst into song about his love of bullfighting. Seeing him mimic the movements of a toreador in a room with a few bullfighting posters tells us all we need to know. And while it is a cartoon, the filmmakers still trust us enough to avoid repeating themselves. They figure we caught on the first time. (Modern films too often use their bulky runtime to show us, tell us, tell us again, give us a flashback and a prequel and then tell us one more time to be sure. Making a six-minute cartoon would do some of these directors a world of good.)

Using General Knowledge: Bullfights and toreadors had been featured in film from the very start and both magicians and spoofs of magicians were equally well-established. Viewers who have never attended a bullfight or magic show could easily list expected behavior during these events. This provides a narrative shortcut for filmmakers as they don’t have to stop and explain that toreadors wave their capes to attract the bull to engage in a series of passes. Less explanation means fewer moments when a title card or dialogue sequence would be needed.

Smart Body Language: Every movement Pink makes was designed by an animation team, of course, but meticulous planning would have been required so that no movement is wasted. Too many imitators of silent comedy think that flailing around and funny walks are enough. In fact, any accomplished silent era comedian was a master or mistress of controlled movement, everything is done for a reason.

In fact, Bully for Pink shows even more visual sophistication than silent era cartoons. For example, we are not given dotted lines to illustrate what is in the character’s field of vision. This isn’t a slam at silent era cartoons, merely an observation that later cartoons continued to work on the formula and language of pantomime and improve it.

Bully for Pink isn’t the most famous of the Pink Panther cartoons but it hits the spot for me beautifully. The character design is lovely and the gags are generally of the more gentle sort. And, let’s face it, can’t we all relate to that little rabbit? If you’re looking for a reminder of how the silent era lived on in cartoons, this is a nice short to refresh the old memory.

I’m not sure if it works worldwide but Bully for Pink is available for free and legal streaming on the official YouTube Pink Panther channel. Give me a holler if it doesn’t work for you and let me know where in the world you are. The cartoon is also available as part of The Pink Panther Classic Cartoon Collection.