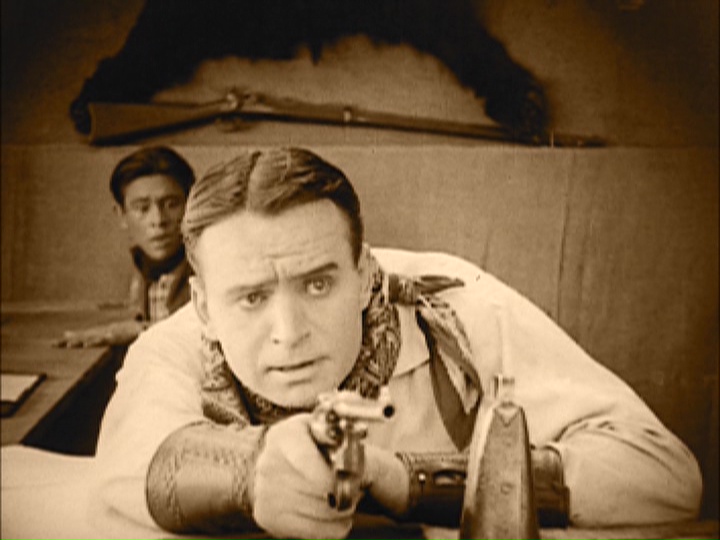 Douglas Fairbanks plays a New Yorker who is obsessed with the west. When he gets an opportunity to travel to Arizona, the locals decide to play up the wild west element but when a robbery turns real, Doug’s cowboy skills come in handy.

Westerns were one of the most popular genres of the silent era; people who had never seen a cow in their lives could slide into the theater to enjoy the rip-roaring antics of Tom Mix, William S. Hart, Harry Carey and others. It was only a matter of time before this disconnect between the movie west and the real west would be mined for comedy.

Douglas Fairbanks is the undisputed King of Swashbucklers but in 1917, he was still working with a blend of modern adventure comedies and goofy westerns. Wild and Woolly was the second of seven films he would release that year and it was a collaboration with director John Emerson and screenwriter Anita Loos.

Fairbanks genuinely loved the west and was like a kid in a candy store when he got to play around with horses and lassos and six-shooters. The story of Wild and Woolly takes this trait and exaggerates it. Fairbanks plays Jeff Hillington, the son of a railroad owner. He feels that he was born on the wrong side of the country and festoons his New York bedroom and office with souvenirs of the old west.

Jeff’s father is appalled and embarrassed by his son’s antics and his employees openly detest him. A solution presents itself when the citizens of Bitter Creek, Arizona arrive to see about getting a spur road in their neck of the woods. The deal is simple: Jeff will go west to Arizona and if he likes what he sees, they’ll get their spur.

(Why a millionaire railroad owner could not simply have shipped his son off to a dude ranch before is a puzzlement. Heck, buy him a dude ranch.)

The citizens of Bitter Creek hatch a plan. They know Jeff is crazy about the old west but their town is pretty modern. What if they dress it up like the old west town of his imagination? Surely that will thrill him enough to deliver a good report to his father.

The belle of Bitter Creek is Nell Larabee (Eileen Percy), whose father owns the local hotel. She is lusted after by Pedro (Charles Stevens), the desk clerk, and Steve Shelby (Sam De Grasse), a crooked Indian agent. Pedro and Shelby have been taking good meant for the local tribes and selling them off in Mexico. The jig is almost up as there is an audit going on but Shelby hits on the idea of using the fake old west act as a cover for a real robbery.

Jeff shows up in Bitter Creek and is immediately taken with its authentic western atmosphere and with Nell. She does her part by flirting and playing the damsel-in-distress but it’s clear that there is some very real attraction between the two. The other townsfolk are a little more wary of Jeff and substitute his live ammunition with blanks for everyone’s safety.

Meanwhile, Shelby arranges for men from the local tribe to attack Bitter Creek while he goes after a rich strong box on a train. Pedro kidnaps Nell but nobody can go after him due to the lack live of ammunition. Cornered in the hotel, it’s up to Jeff to use his athletic prowess to save the day.

Douglas Fairbanks is in top athletic form in this film. He leaps tall buildings in a single bound, rides like crazy and shows off some mad roping skills. No leading man before or since has managed to quite capture his patented combination of athletic feats and breezy comedy. That being said, it’s a shame that the picture did not dedicate more time to his discovery of the perfidy of Bitter Creek and his realization that his vision of the west is all celluloid fantasy.

Eileen Percy is as cute as a bug, though she is reduced to damsel for the finale. Percy is sometimes listed as a casualty of sound but a quick glance at her 1920s filmography shows that she was working as a lead in cheapie productions and supporting roles in studio fare. In other words, her career was hardly thriving when sound entered the industry. Tip: Before listing someone as a victim of sound, take a look at their career BEFORE the transition.

Oh, and Percy married Harry Ruby of Kalmar and Ruby fame (I Want to Be Loved by You) and was played by Arlene Dahl in the 1950 biopic Three Little Words.

Sam De Grasse, who also opposed Fairbanks in Robin Hood and The Black Pirate, is on hand to add his usual understated menace to the proceedings. Despite his mustache, there’s nothing Snidely Whiplash or Dishonest John about his acting, proving once again that De Grasse was one of the best baddies in the business.

Charles Stevens is a familiar face to Fairbanks fans as he was a buddy of Doug’s and appeared in most of his pictures, usually as a henchman but sometimes as a good guy. He henches well enough here, obviously keying off De Grasse.

(The studio publicity machine claimed that Stevens was the grandson of Geronimo but he actually was not Native American at all. His father was Caucasian and hailed from Massachusetts; his first wife was an Apache but she passed away and he remarried. Stevens’s mother was Mexican-American with zero connection to Geronimo. Tip: Never swallow studio publicity unless they have receipts.)

So, no problems with the cast. Everyone does their job and seems to be enjoying themselves. Alas, good performances don’t quite make up for some serious issues.

This film has three major flaws and they can all be blamed on the screenplay; based on a story by Horace B. Carpenter, it is credited to Anita Loos. The first flaw is the films beginning and the establishment of the character of Jeff, the second flaw is the sudden and distressing spike in violence and the third flaw is the flippant ending that ignores said spike.

Wild and Woolly squanders its first act telling us over and over again that Jeff really, really loves the west. The other character in the film do find him obnoxious but it’s pretty clear that we are supposed to find him to be a cute eccentric. Sorry, firing live ammunition at a servant’s feet wasn’t cute in 1917 and it’s not cute in 2017. Even without the gunplay, the repetition of the same gag dilutes its impact. Seeing Fairbanks with a teepee in his bedroom is funny but by the time we’ve seen his western-themed office and he rides a horse through Central Park, we just want to send Ms. Loos a telegram assuring her that the cheap seats get it.

Once the film enters its third act, Jeff’s real bullets find real targets and, frankly, it’s uncomfortable to watch. The fact that these targets are Native Americans put up to the attack by a crooked government official is… Oh dear. (Not to mention the railway worker Shelby shoots for reals during his robbery.)

It’s worth noting that the Chicago censorship board’s primary objections to the film were the violence and drunkenness. I think the scenes should have been cut in pre-production because they are simply jarring in a comedy. The censors also inexplicably demanded that this title be cut: 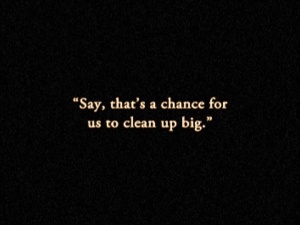 But back to the subject at hand: violence. Wild and Woolly isn’t as bloody as, say, The Black Pirate but the latter film immediately set itself up as a picture with high stakes. We meet the villains in the process of killing every single person on a Spanish ship and Fairbanks, as the only survivor, vows revenge. While it’s bloody by Fairbanks film standards, the tone is consistent throughout and Fairbanks’ behavior has clear motivation.

On the other hand, Wild and Woolly is whiplash-inducing as it goes from a goofy gag to Rambo in 2.5 seconds. Films can change genres and levels of humor mid-stream, of course, but it’s a tricky thing to pull off and Wild and Woolly is simply too abrupt, especially since it immediately becomes goofy again once the baddies are foiled. (For an example of this silly-to-serious trick done right, I recommend Galaxy Quest, which has a very similar plot to Wild and Woolly but manages to balance its laughs and peril more effectively. If you want a more apples to apples comparison, try Fairbanks in A Modern Musketeer, which also manages to do a better job of balancing its humor and drama.)

As a final bit of oddness, we even get this title card, spoken as (presumably) the dead Native Americans are still being removed from the town’s streets: 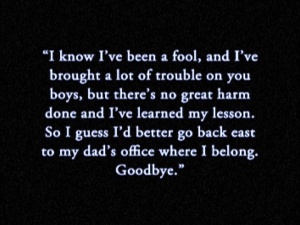 I am reminded of the great Will Cuppy’s essay on Alexander the Great in The Decline and Fall of Practically Everybody:

“Nothing remained of his work except that the people he killed were still dead… Just what this distressing young man thought he was doing, and why, I really can’t say.”

I really, really, really wanted to like Wild and Woolly and many of the elements within the film do work. Fairbanks is a scream once he gets out west, Eileen Percy is very appealing as the heroine, Sam De Grasse is subtle as ever and the stunts are great. Alas, the slow beginning, unbalanced character development and the embrace of for-keepsies violence keeps this picture from being a Fairbanks favorite in my book.

Wild and Woolly was released on DVD as part of Flicker Alley’s Douglas Fairbanks: A Modern Musketeer box set. It comes with a smashing score by Robert Israel.