An oddball melodrama shot on location in Detroit, Eleven P.M. is a rare surviving film from mysterious indie director Richard Maurice. It weaves a tale of gangsters, street musicians, dogs with human heads… Well, you can’t accuse it of being boring.

Let’s get down to brass tacks: we don’t know a whole lot about Richard Maurice, the producer/director/writer/star of Eleven P.M. Few of his films survive and we can’t even be sure of the exact release date of this one. While generally reckoned to be a 1928 film, a few respected historians beg to differ and believe it was released later. So, you see where we are with this.

Eleven P.M. is a profoundly strange film, weird as only films with a producer/director/writer/star can be. To say it’s a mixed bag is the understatement of the decade. Every element— the performances, the story, the visuals—is wildly inconsistent. But we can get more into that later. First, the plot. Such as it is.

Oh and the main reason people are interested in this film: the poster.

Yes, the scene is in the motion picture. But, as I said, time for the plot.

Louis Perry (Sammie Fields) is a writer and athlete with a chapter due by eleven p.m. He’s writing a melodrama about humans becoming animals or something like that. His frenemy, Roy Stewart (H. Marion Williams) wants him participate in a fight at eleven p.m. Perry’s girlfriend (Orine Johnson) and her mother (Orine Johnson, um…) both want him to go to a party at—you guessed it—eleven p.m. These conflicting appointments don’t seem to bother Perry and he falls asleep with his dog on his lap.

Perry dreams about a street musician named Sundaisy (Richard Maurice), who takes a mortally Roy Stewart (H. Marion Williams, again. You’ll soon get used to this) into his shack. The dying man asks Sundaisy to take care of his son, Clyde, and make sure he does not fall into a life of crime. His wallet has enough money to pay for the boy’s education. Roy dies but before Sundaisy can get the wallet, a hand snakes through the window and steals it.

Sundaisy apparently is doing quite well at the busking trade because he decides to pay for young Clyde’s education anyway. He also takes in a young woman named June (Orine Johnson, yes, again), whom he marries when it’s clear that she has nowhere else to go. Alas, the “school” Clyde was sent to is actually a front for a criminal gang and since Sundaisy never bothers to check on the kid, he is raised by crooks. Once Clyde grows up (and is played by H. Marion Williams), he decides to scam some money out of Sundaisy.

Clyde not only robs his incompetent mentor, he also seduces June away from him. Sundaisy is heartbroken but carries on for the sake of his daughter, Hope. Many years pass and Hope grows up (now played by Orine Johnson, shut up, they could only afford one woman and she’s it) into a dancer who performs alongside her father. Clyde spots her, fails to recognize her and vows to win her by hook or by crook. However, she is dating Louis Perry (our writer narrator, if you recall) and he prevents Clyde from abducting the young lady.

Sundaisy is enraged and wants to kill Clyde but has a heart attack instead. Hope decides to dance in Clyde’s club, which he suddenly owns, and Perry gets annoyed, gets mugged, gets amnesia. But then (SPOILER!) Sundaisy takes over the body of a dog and through the magic of not-so-special effects, the animal apparently changes breeds between shots and Sundaisy’s head appears. Well, kinda. Pictures: 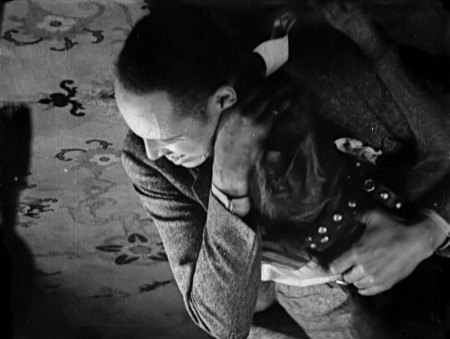 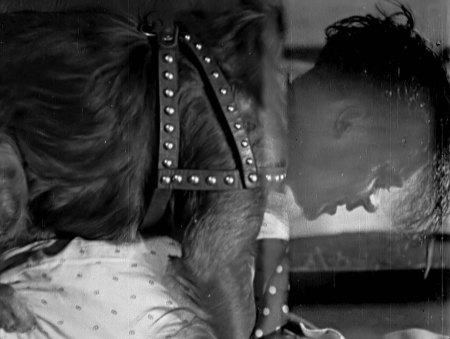 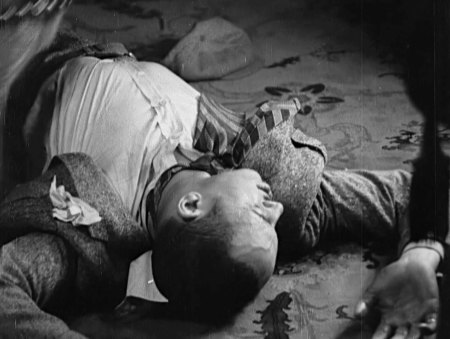 (More Spoilers) And then Perry wakes up with all his friends waiting for him and explains that he dreamed the last chapter of his book. Not a very flattering view of his nearest and dearest, I must say.

As you can well imagine, the acting is hit and miss with emphasis on the miss. Sammie Fields is an utter dreamboat but he also keeps looking directly into the camera, which rather undermines what was already a so-so performance. Orine Johnson has an appealing, winsome quality but she never quite pops. Richard Maurice gnaws at the scenery because, hey, is the director going to tell him to tone it down? H. Marion Williams, however, gets into the spirit of thing and, while hardly subtle, easily gives the best performance. I also liked Wanda Maurice (Richard’s daughter?) as young Hope. She shows a real flair for acting despite her young age.

Maurice takes full advantage of his Detroit locations and this change of scenery gives the film a unique look and feel. Silent movie fans are used to New York, New Jersey and Los Angeles. Nerdier viewers are also accustomed to seeing Florida and Chicago. But Detroit? This is a first for me and the city’s shabby, well-worn appearance suits the dark plot to a T. Pictures: 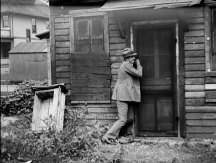 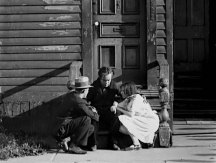 Ah yes, the plot. The story is both disjointed and bonkers but no more nutty than Hollywood fare like Sweet Alyssum, which has its main character go from night watchman to oil baron, all the while trying to kill the family of the man who wronged him. The film concludes with the protagonist’s daughter throwing her baby into the path of his shotgun blast (!) in order to stop her father from slaughtering her husband. Kind of puts things in perspective, yes?

The main problem with Eleven P.M. is that it doesn’t seem to remember what happened from one scene to the next. Characters go back and forth between being rich and poor with no explanation simply because the story calls for them to be flush or broke. No one’s motivation is clear, the frame story simply doesn’t work, the inexplicable dual roles are distracting and Sundaisy has got to be the worst Daddy Long Legs in the history of cinema. Seriously, he didn’t check on Clyde even once during those twelve years? Sigh. After viewing this film, you’re kind of tempted to sit in a hovel and mope. It’s not exactly a picnic, is what I’m saying.

However, I should mention that Richard Maurice does show a flair for dramatic shots and has a few very nice compositions in the film. He certainly demonstrates a vivid imagination that could have turned into something powerful if he had remained a filmmaker. And all this when he likely had no experience with the mainstream film industry and was entirely self-taught. Who knows what he might have accomplished with a little training, more experience and a bit more of a budget. The fact that the film was made at all, considering the challenges that African-American filmmakers faced, is pretty impressive.

Eleven P.M. is a dingy, dreary movie with poor writing and some poor acting. However, it is a chance to see Detroit being used as a film location (a real rarity) and there are flashes of talent in the picture. It’s definitely a curio but well worth seeking out.

Available on DVD and Bluray as part of the Pioneers of African-American Cinema box set from Kino.