Welcome back! I am cooking up recipes of the silent stars and tasting them from a modern point of view. (I have listed all the recipes I have tested on this dedicated page. Check back often.) Today, we will be testing a recipe from a superstar of the talkies who made a few silents in her youth.

I occasionally have friends of the site make recipe requests. Colbert’s recipe was requested by Janet of Sister Celluloid. If you aren’t already reading her clever blog, be sure to check it out!

Claudette Colbert was in silent films? Yes indeed! In 1927, she starred in For the Love of Mike directed by Frank Capra. Sounds great! Where can we see it? Alas, it is considered a lost film. Check those attics!

So, we know that Claudette Colbert had a long and successful career but what about her salad making skills?

Colbert writes: “I don’t think I would exactly call myself a vegetarian– but there are times that I don’t feel like eating meat.” She promises a salad that will be good for the figure.

Quick and easy, she calls this. Well, your mileage may vary because there is a lot to chop and I mean a LOT.

It looked nice when it was unmixed, kind of like a veggie rainbow. Unfortunately, the mixed up version was not as attractive.

The sour cream helped (vegan sour cream can easily be substituted) but it still looked a bit muddy. 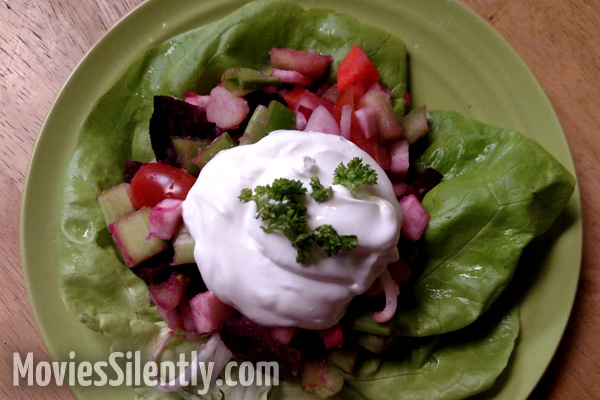 Score: 2 out of 5. I love vegetables and I love salads but this combination just does not work for me. There are too many flavors and they don’t necessarily complement each other. The raw beets were a particularly bad idea as they stained everything else and their flavor was barely discernible. Beets with all the disadvantages and none of the advantages. Make mine pickled!

While I love my veggies, I prefer to have fewer individual items in the mix so that the flavors can really sing. Plus, there were too many hard-textured veggies, I started to feel distinctly like a cow chewing its cud. All in all, just not very tasty.

What I would change: If we stick with raw notion, I would stick to tomatoes, radishes, cucumbers and pepper. If we allow ourselves cooking, I would have potatoes, pickled beets, peas and onion.

Sorry, Janet! Claudette has failed us.