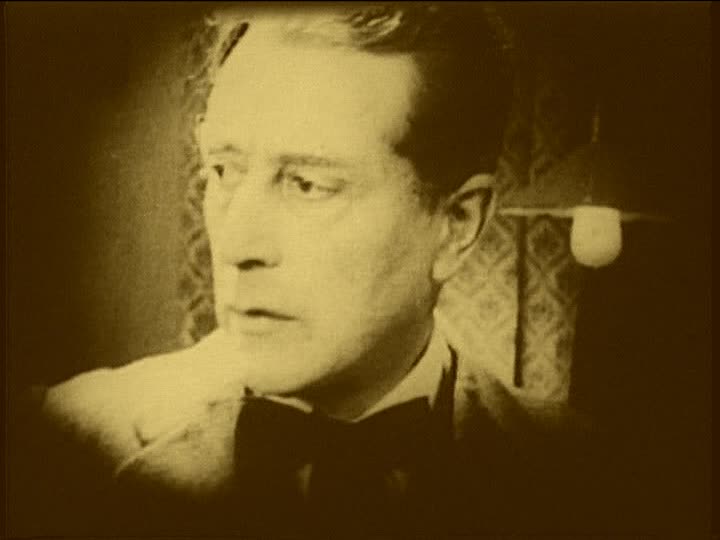 The Man with the Twisted Lip (1921) A Silent Film Review

Eille Norwood’s acclaimed take on Sherlock Holmes is the subject of today’s review. The mystery? A well-to-do businessman is seemingly murdered by a beggar and Sherlock Holmes is called in to discover the truth. In spite of its dark premise, this is one of the lighter stories in the Holmes canon.

In our last exciting episode, we took a look at the very first authorized film adaptation of Sherlock Holmes, the unintentionally hilarious French version of The Copper Beeches. (And, as a gentle reminder, the ridiculous acting of that 1912 film is not typical for that year. There’s no need to be polite, Sherlockians, go ahead and guffaw.) Holmes author Sir Arthur Conan Doyle re-obtained the film rights to his character and decided to try again with a new motion picture company. This time, Doyle opted to stay British and Stoll Pictures won the right to produce the Sherlock Holmes series.

Most of the series was directed by British film pioneer Maurice Elvey (who, among other claims to fame, was a mentor and inspiration to David Lean) and it starred Eille Norwood. Norwood’s performance as Holmes has been acclaimed as the best the silent screen has to offer. In fact, Doyle himself was counted among the fans of his portrayal. If the original author’s stamp of approval is anything to go by, Norwood can lay claim to the title of most authentic Holmes.

The big questions will be whether or not Norwood lives up to the hype and how successful this adaptation is in capturing the spirit of the world of Sherlock Holmes. Let’s get started!

Sherlock Holmes (Norwood) is working a new case and he explains the particulars to Dr. Watson (Hubert Willis). Nellie St. Clair (Paulette del Baze) has reason to believe that her husband, Neville (Robert Vallis) has been kidnapped or murdered by sinister forces. The respectable businessman left for his office as usual, taking along one of the children’s toys to be repaired.

Later, Mrs. St. Clair spotted her husband in the upper room of an opium den, obviously in some kind of distress. She was barred from entering but fetched the police. Inside, they found a beggar with a twisted lip and the toy her husband was supposed to repair. To make matters even more dire, Neville St. Clair’s coat was recovered from the river. The pockets had been stuffed with pennies to make it sink.

It seems that St. Clair has fallen victim to some form of foul play and his wife is understandably in search of answers. The beggar has been arrested, of course, but he has not yet told the police why he possessed some of the victims belongings and then there is the matter of the coat. With all sorts of heavy objects handy, why would money have been used as a weight to make it sink?

I won’t give away the ending of The Man with the Twisted Lip other than to say that the film generally follows the original short story with a few minor changes. I will only say that this is one of the lighter tales in the Holmes canon, in spite of its dark beginning.

Elvey’s direction neatly captures the dank qualities of the seedy side of town and some of the shots of Mrs. St. Clair walking around the dimly lit streets are quite beautiful. In general, Elvey and cinematographer Germain Burger have fun with light and shadow, from the fireplace glow of 221B Baker Street to the harsh electric bulbs of the jail cell. It’s very stylish and organic. In fact, the whole picture has a Masterpiece Theater tone, if that makes any sense. We feel like we are in capable and very polite hands.

One complaint, if it can be described as such. The film begins with a series of dialogue title cards. No context or other visuals are given, we are merely shown a conversation between Holmes and Watson in intertitle form. I’m not sure if this was the original intention (it would have made the film cheaper) or if this was done by an editor or amateur collector to reduce the film’s length or to censor it. Whatever the reason, it is a very strange and jarring way to start an otherwise well-made film.

These are the only images in the opening scene: 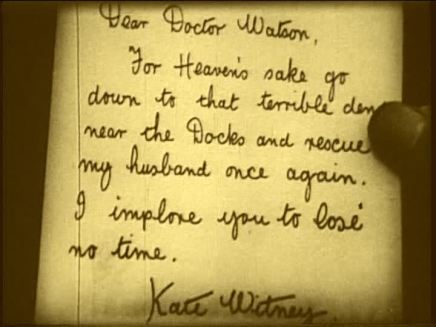 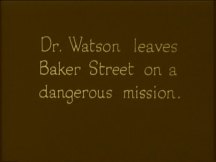 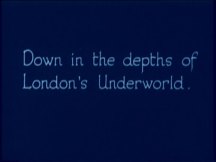 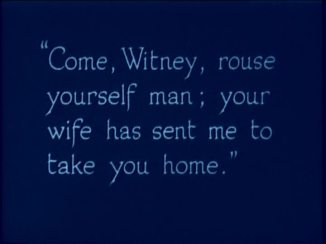 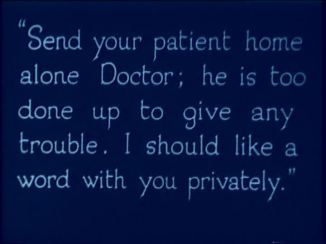 Now for Norwood. Like Richard III, the character of Holmes tends to bring out the Hamosaurus rex in actors. Sometimes it works (Jeremy Brett) and sometimes it doesn’t (the Éclair films). There are some amazing Holmes performances, to be sure, but all too often, Holmes actors merely run about shrieking that the game is afoot or purr that the matter is elementary, my dear Watson. In short, what we think of a normal Sherlock Holmes behavior teeters dangerously on the edge of self-parody. Norwood is one of the few Holmes actors to underplay and that is one of the secrets to his appeal.

While he does not abandon the cerebral aspects of the character, Norwood allows himself some warmth, which also sets his performance apart from the more frigid (and frequently rude) standard issue Holmes. His Holmes is more lost in thought but generally a good guy, which is a welcome change from more modern portrayals that have Holmes’ unconventional behavior become downright cruel.

The idea of Holmes as an abrupt jerk has become more and more stylish (not without reason as the character in the books could be quite brusque) but Norwood does not shy away from positive emotions, which is relatively rare in any sort of genre hero these days, it seems. And while Holmes is sometimes shown to be nearly Vulcan in his seriousness, Norwood treats the twist ending of this mystery with considerable humor.

Any portrayal of Sherlock Holmes risks falling into cliché but the Stoll series presents him as a fully-rounded human being.

All in all, the Stoll Sherlock Holmes series really captures the spirit and feel of its source material and deserves its acclaim. It’s a shame that more films in this series are not available to the general public as both Elvey and Norwood could use a little more love from film fans.

The Man with the Twisted Lip was released on DVD from Grapevine, along with two other entries in the Stoll series.