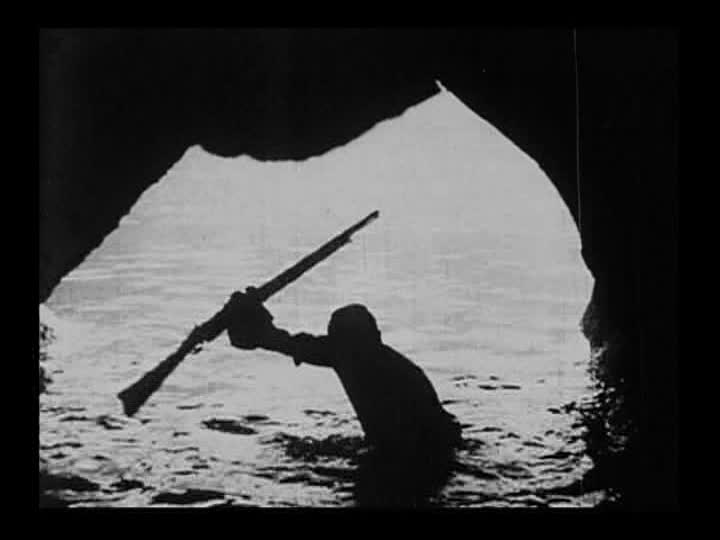 We’re back to Ireland but the sweet and innocent romances have been replaced with calls for armed uprising. This mini feature is almost as notable for its backstage drama as it is for its somewhat threadbare story. This was the last stand of the filmmaking team affectionately nicknamed The O’Kalems.

In which everyone gets just a little sick of Sidney Olcott.

Before we get started with the review of this picture, I think it is important to set the stage.

Ireland was in a volatile state in the 1910s. Years of resentment toward British rule and memories of attempted rebellion finally coalesced into the Easter Rising of 1916, which declared Ireland an independent republic. This was followed by an armed insurrection, the dividing of a nation and a long and bloody period of civil unrest.

Sidney Olcott was of Irish descent himself and he embraced the bubbling revolutionary spirit with open arms. His films began to overtly support the independence movement. This went over about as well as you can imagine with the English side of things and Kalem was sent word that such films would not be tolerated. The British government threatened to ban not only Kalem’s films but all the films of the trade organization to which the studio belonged. This was no empty threat as the British market was both important and lucrative to the budding American film industry.

Kalem ordered Olcott to shift gears immediately and make nice films about poetry and flowers and romance and young women being brutally attacked. You know, family pictures. Olcott conceded defeat but his problems with Kalem were not over. Olcott had clashed with management once too often and relations deteriorated. The self-contained foreign jaunts Olcott and Gauntier specialized in had represented a healthy savings in production costs in previous years but the west coast factory system was taking over. Kalem’s top director and actress were becoming relics.

Olcott and Gauntier journeyed to Egypt and the Holy Land to make the religious epic From the Manger to the Cross. The film proved to be a major hit for Kalem but the studio omitted Gauntier and Olcott from the credits and publicity. Soon after, director and star gave notice.

Olcott’s reputation as a troublemaker made his name mud among the money men of the movies but Gauntier still enjoyed popularity and so a new company was formed under her name. (In all fairness, it’s not very nice to take someone’s money with the promise of making a pleasant movie about romance and then turning around and making one encouraging armed rebellion. People tend to get annoyed. It would be like me paying a contractor to build a rose-covered gazebo and only to find that he has built a small fort complete with cannon pointing at my neighbors.) Gauntier and Olcott gathered their crew and returned to Ireland in 1913. It is significant that the first film Olcott released under the new company’s banner was a tale of Irish revolution.

Not even Olcott dared set such a story in modern times and so the Georgian period and the Irish uprisings of the late-1700s and early 1800s were used for this three-reel melodrama.

Recycling elements from the old Kalem releases, For Ireland’s Sake tells the story of Marty O’Sullivan (Jack Clark), a young blacksmith who is illegally forging arms for the rebellion against English rule. He’s caught in the act by a band of redcoats but manages to evade capture thanks to some quick thinking and fortunate wardrobe choices from his best girl, Eileen (Gene Gauntier). She hides Marty in her voluminous cloak and points the soldiers in the opposite direction.

Marty next tries to hide in the chimney of the local tavern but is soon smoked out by the English. However, the pub patrons overpower the soldiers and steal their muskets. This leads to a ruthless manhunt but Marty is safely hidden in a watery cave.

Eileen delivers food to her fugitive boyfriend but fails to realize she is being followed. By a soldier in uniform. One would think that a person in Eileen’s position would be on the lookout for anyone wearing red who might be following. Nope. Eileen leads them right to Marty and both are arrested.

Fortunately, Father Flanagan (Sidney Olcott) is permitted to visit them in prison and since metal detectors were not yet invented and since priests wear conveniently long robes, he is able to sneak a file to Marty. Our young couple soon break jail and are married by Flanagan just before hopping on a boat for America.

At this point, the creakiness of the Olcott/Gauntier productions was really beginning to show. The three-reel length (roughly 35 minutes) is an awkward one for dramas. Not punchy like one and two-reel films but also not as detailed as a full feature. Sidney Olcott’s scene composition is as lovely as ever but the camera work is staid and the editing bloated. As was sometimes the case with directors who cut their teeth on short films, Olcott doesn’t seem to know what to do with the extra runtime. Shots go on for one or two beats longer than they should. Scenes tend to drag and lack the excitement that an adventure of this kind requires.

There are other flaws. While Gene Gauntier is still fresh and appealing as the heroine, Clark and Olcott both indulge in the sort of overacting that would soon be banished from the screen. The script is lean on explanation and viewers unfamiliar with Irish history will have a heck of a time following what is going on. Granted, the intended audience for this film was the Irish-American community but failing to go for cross-culture appeal was a mistake for a fledgling film company trying to compete with the big boys.

This film is the end of an era in so many other ways. As an independent concern, Gauntier and company did not have to bow to pressure from business partners or investors. However, the collaboration was short-lived. The First World War was on the horizon, cutting off most overseas productions. Further, the method of making pictures changed so drastically from year to year that anyone who was not holding on tight would be left in the dust. Gene Gauntier made her last film in 1917. Sidney Olcott was out of the movies a decade after that.

The split between Olcott and Gauntier has never been fully explained. The pair had worked together for seven years at Kalem but lasted only a few months as independent collaborators. While little information is available, it does seem that Olcott resented taking orders from women, particular one he was directing in a picture. Whatever the case may be, he left Gauntier’s company soon after it had formed. With new leading lady (and wife) Valentine Grant, Olcott made one more jaunt to Ireland in the summer of 1914 to make, you guessed it, more uprising pictures.

(Just so you know, I do not find Olcott’s antics with Kalem to be particularly admirable. I have contempt for filmmakers who encourage violence but who do not wish to endanger themselves. Olcott was perfectly willing to be all “Wind that Shakes the Barley” before the War but he certainly didn’t pick up a rifle after 1916. All talk, that one. I’m not taking a side in the conflict, I simply feel that one should not actively encourage armed rebellion and then be all “going back to America, buh-bye!” It’s sort of evil and neither side appreciates it.)

Olcott made a few pictures under his own name before he began a stint at proto-Paramount. Olcott’s style was already creaky, he clashed with superstar Mary Pickford (a woman who was very much in charge) and he soon found himself doing one-off work for the independents, a virtual has-been. He would eventually come in from the cold thanks to a movie star and a newspaper mogul but that’s another story for another review.

For Ireland’s Sake is an interesting glimpse at a woman-owned, woman-run film company. It also shows us the American film industry in flux as features began to take over. But it is mostly notable as the last stand of the O’Kalems.

For Ireland’s Sake was released on DVD as part of The O’Kalem Collection put out by the Irish Film Institute and the set is available for purchase in their online shop. The set includes eight of the O’Kalems, as well as a documentary on their production entitled Blazing the Trail, which I relied on heavily as a source for background on this relatively obscure period of filmmaking. I am quite pleased. It’s a great set, the price is reasonable and the money is going to a worthy cause.