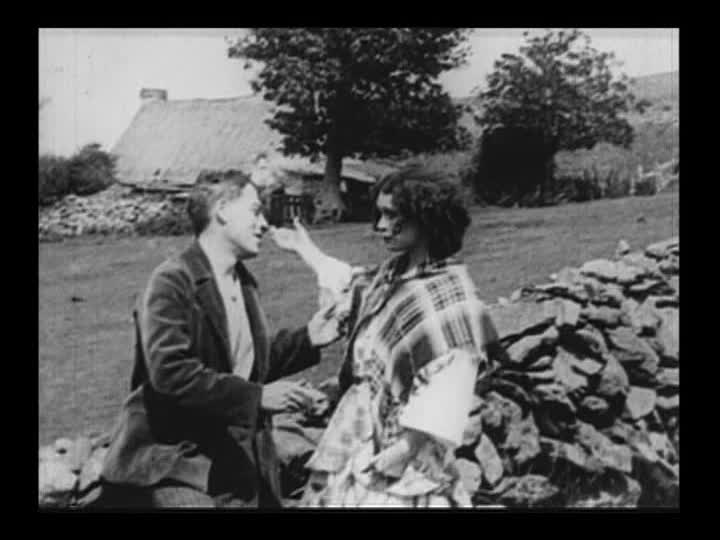 The Lad from Old Ireland (1910) A Silent Film Review

The first fiction film shot in Ireland, this film tells the tale of an Irish fellow who makes good in America but must rush home to save his lady love from the terrible rent man. (Yes, they dusted off that old chestnut.) A story rife with tropes but boasting gorgeous scenery, this historic short continues to charm.

Why, we’ve gone as far as Florida to make motion pictures!

Everyone fixates on the talkie revolution as the biggest shift in motion picture history but there was an arguably bigger one the decade before. In the mid-1910s, the American film industry had the triple whammy of the change to feature-length films, the mass exodus to California and the start of the First World War. The fall of the Motion Picture Patents Company further assured the passing of the old guard.

Movies made in the pre-feature era are like looking into a whole other world with different stars, different stories and different tone. In fact, watching these films is even more of an archeological study than viewing silents from the Hollywood/feature era. A few studio names (Biograph, Keystone) are still recognized but dozens of others are forgotten.

Kalem is a name known only to silent film buffs nowadays but they were a powerhouse in their prime. They specialized in sending crews around the world to shoot motion pictures in locales that would be exotic for the audiences back home. Florida, Spain, the Holy Land… and Ireland. We are going to be discussing the first of these Irish-American films. It is also the first fiction film ever made in Ireland.

Sidney Olcott was Kalem’s top director and Gene Gauntier was their popular screenwriter and leading lady. Together, they formed the core of the team that would become known as the O’Kalems. The Lad from Old Ireland was the result of their exploratory mission to County Kerry in the summer of 1910.

The hero of the tale is Terry O’Connell (Sidney Olcott, doing double duty), an Irishman who decides that he will seek his fortune in America. He leaves behind his sweetheart, Aileen (Gene Gauntier). His hard work pays off in his new home and he soon finds success in business and politics. Ten years pass and he has forgotten the girl he left behind.

Aileen is in peril. Her grandmother has died and she now has no money to pay the rent. The local priest sends word to Terry, who drops everything to sail home and pay Aileen’s debt. The final scene of the film is lost but contemporary reports say that it showed the calling of the bans for Aileen and Terry.

For modern viewers, the single biggest draw is seeing the everyday life of the Irish in the early twentieth century. Actually, this would have been a draw for 1910 audiences as well, as the motion pictures were heavily attended by immigrants and it is likely that the Irish-Americans in the audience enjoyed a nostalgic and respectful portrayal of the old country.

(The Irish were a maligned group in nineteenth century America, subject to abuse and discrimination. The pantomime Irishman was a popular figure of ridicule. As the Irish gained upward mobility, they began to fight back against these stereotypes, though motion pictures did continue to rely on them to a certain extent well into the feature film era.)

The interiors were shot back in America but all the Irish exteriors are 100% authentic. We see the characters harvest peat, sit on stone walls and wander through the gorgeous scenery. This is a picture postcard come to life.

The thrifty Olcott and Gauntier did not let their ocean voyage go to waste. As the story calls for the hero to sail to American from Ireland and back again, they took the opportunity to shoot shipboard scenes with the crew as extras. The Kalem duo received a warm welcome in Ireland and obtained the cooperation of the local residents as extras and consultants. This intelligent use of the people, scenery and events surrounding them is one of the great charms of early film. There is a spontaneity and can-do attitude that comes through on the screen. The novelty of the motion picture people to the Irish and the ship passengers is obvious. Extras and background characters openly stare at the actors and the camera.

What about the more technical aspects of the production? The story is pretty much the sort of bread and butter melodrama that Nickelodeon audiences ate with a spoon. During this time period, a lot of films either relied on audience familiarity with certain tropes (e.g. it is not entirely clear why Terry is going to America but audiences of 1910 would be very aware of the large number of immigrants fleeing poverty) or they kept their stories simple enough to fit neatly in a one or two-reel runtime (approximately twelve to twenty-five minute).

The Lad from Old Ireland packs a whole lot of story into a single reel with mixed success. The immigrant narrative runs at a furious pace and one wonders at Aileen waiting an entire decade for the wayward Terry. Not exactly the most proactive heroine, eh? And I’m not sure why Terry didn’t just wire the money to the priest, who surely could be trusted to hand it over to Aileen.

Come to think of it, this is the first time I have ever seen a “You must pay the rent!” “I can’t pay the rent!” scene played out in the manner of the Victorian melodrama. Whenever a nation is undergoing financial straits, the landlord can easily be used as a villain but this was so perfectly overbuttered that it was quite amusing to see.

Olcott’s direction is very much in keeping with the period. There are no close-ups and the camera stays nailed to the floor. However, the film has good rhythm, the cross-cutting at the climactic race to the rescue is effective and the beauty of Ireland and its people is on full display.

Olcott was known for handling actors well and his interactions with Gene Gauntier confirm this (though his own performance is a bit overdone). He eschews the twee hippity-skippity nonsense that D.W. Griffith inflicted on his leading ladies. Gauntier is a calm, appealing presence on the screen and she plays her scenes quite subtly for the era.

In fact, I was so charmed with Gauntier that I find myself hungry for more of her work, particularly films in which she plays more of an active, heroic character. The clips I have seen (from The Further Adventures of the Girl Spy, among others) show an athletic, daring actress who could do any stunt a man could do—in a hobble skirt, heels and a corset. (She later laughed that she got excited and wrote elaborate and daring chases, escapes and stunts even though she knew she would have to be the one to figure out how to perform them.) Sadly, very little of her work as writer-actress survives and even less is available to the general public. I really hope that this changes soon and the hard work of this intriguing pioneer be returned to a place of honor.

The Lad from Old Ireland’s story is nothing to write home about but the setting is amazing and of enormous interest to modern devotees of silent cinema and Irish history. This charming little film is easily worth a dozen minutes of your time. Enjoy!

The Lad from Old Ireland was released on DVD as part of The O’Kalem Collection put out by the Irish Film Institute. The set includes eight of the O’Kalems, as well as a documentary on their production entitled Blazing the Trail, which I relied on heavily as a source for background on this relatively obscure period of filmmaking. You can also watch the film legally and for free via the IFI Player website.