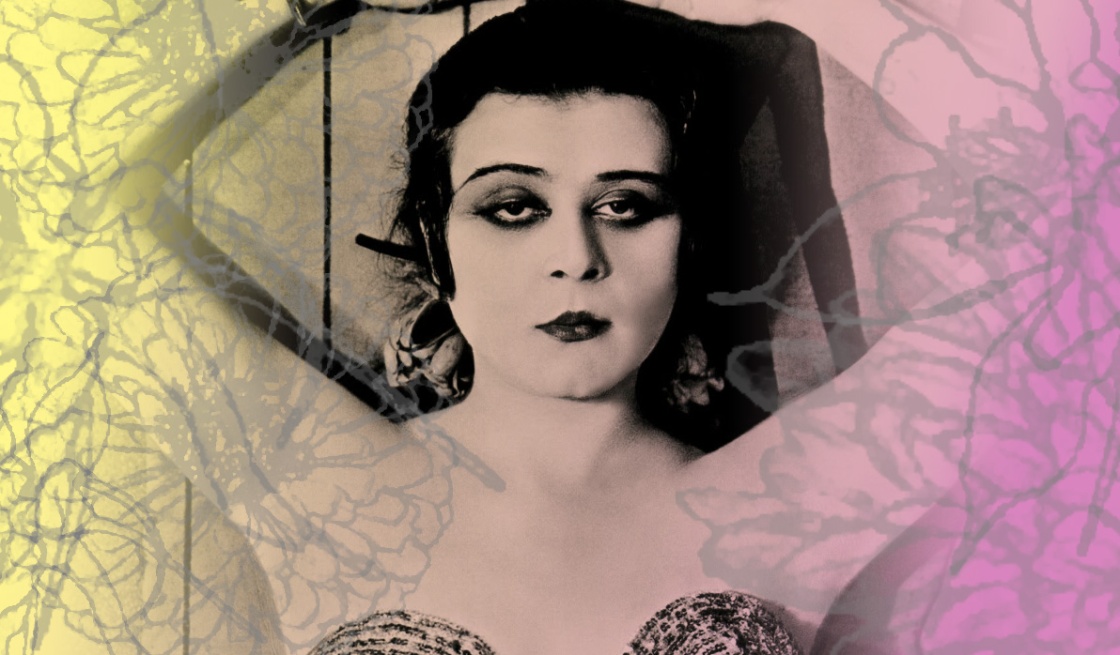 Cooking with the (Silent) Stars: The Theda Bara Sandwich

I am taking a tiny break from the 1929 Photoplay Cookbook to prepare a recipe from a star who was the very essence of the 1910s. After all, the mid-‘teens were the age of the vamp and no vamp was more famous than Theda Bara.

Bara was surrounded by hype (the studio publicity department was shameless) but from interviews and anecdotes, she seemed like a lovely, down-to-earth woman who didn’t take herself too seriously.

Bara hit it big in the 1915 film A Fool There Was, in which she seduces a married man and drives him to his death. If the film had been made 20 years later, Bara would likely have been obliged to fall off a cliff or something but this was 1915 and she laughs and sprinkles rose petals over his body instead.

This was heady stuff and Bara became a phenomenon. She played famous seductresses like Carmen, Cleopatra and Salome but she also ventured into sympathetic roles, such as Juliet and the lead of The Two Orphans, which was re-adapted later as Orphans of the Storm with the Gish sisters.

If I make few remarks about the quality of Bara’s acting, that is because there are not many people alive who can do so. Theda Bara has one of the lowest film survival rates of any major star. We have her breakout hit (A Fool There Was) and her last feature (The Unchastened Woman). Cleopatra, her mega-hit, only has a few fragments to its name. East Lynne (1916) survives but it is more of a morality melodrama than the sort of over-the-top vampishness we crave. Other surviving film elements include fragments, lone reels, shorts, walk-ons and cameos but complete surviving features in which Bara is the star? Rare as hen’s teeth.

So, we can see very little of Bara’s work but let’s taste the sandwich that she inspired. In 1916, Photoplay magazine published a collection of sandwich recipes that were said to be based on the screen personalities of the biggest female stars. What will Theda Bara’s recipe taste like? 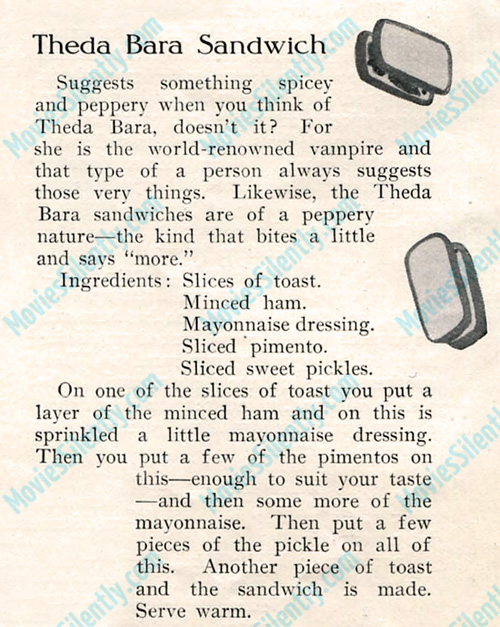 The type of bread is not specified (most of these recipes are very specific about the type of bread and how thick the slices are to be) so I chose a good swirled rye. I figured that this combination of flavors called for a sturdy, flavorful bread to support them.

I am not a huge fan of canned pimentos by themselves but I happen to have a fairly large supply because it is an essential component in vegan nacho dip. (Which is awesome, by the way, and even the carnivores happily noshed on it. I’m not a vegan but I have friends who are, plus some with dairy allergies, and I enjoy the challenge of cooking something that everyone can munch.)

Sweet pickles were another matter. I hate them with a passion. Therefore, I bought the cheapest jar in the store. I’m sure Miss Bara will forgive me.

Ham and mayonnaise were on hand. I am an American, after all. (I hate mayonnaise and love deviled eggs. Oh, the contradiction!)

The recipe gives a very specific order for everything so here we go!

I lightly toasted and then cut the bread into heart shapes because I am not a savage. Step one: the minced ham.

Next, “sprinkle” mayonnaise on it. I don’t know what 1916 mayonnaise was like but this is not a consistency that one normally associates with sprinkling. “Glopping” mayonnaise on… 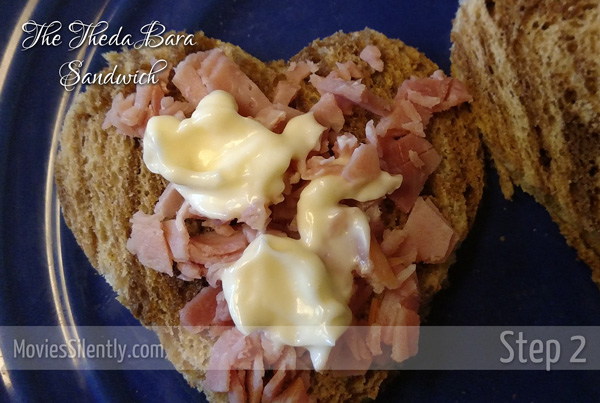 I think we moderns have a better grasp of these things. Mayonnaise THEN minced stuff.

And now for the pimento.

And the (shudder) sweet pickles. 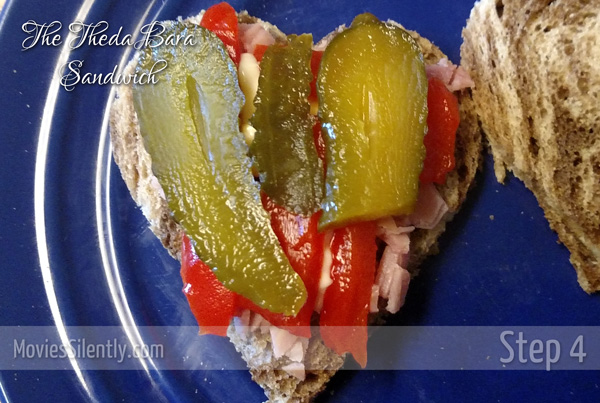 Pop a top on the sucker and we’re done!

But how does it taste? 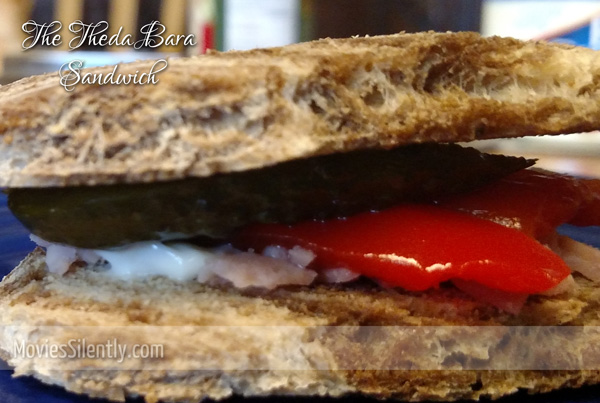 Time for the taste test video to reveal all!

Score: 4 out of 5. Considering that I hate one ingredient and dislike another, it’s pretty surprising how tasty this sandwich is. The flavors blend together nicely, the saltiness of the ham, the sweetness of the pickles and the mayonnaise holding everything together. The rye bread was a good call as I doubt that the sandwich would have tasted as good on plain white bread.

It’s a substantial sandwich with plenty of flavor. Made full-size, this would definitely be a filling lunch. It can also easily be made vegetarian or vegan by substituting soy bacon or ham and using vegan mayonnaise instead.

All in all, this sandwich does Bara proud. Now excuse me, I have this sudden urge to line my eyes with black and strike dramatic poses.