Welcome back! I am cooking my way through the 1929 Photoplay cookbook (recipes of the stars!) and you are invited to tag along. (I have listed all the recipes I have tested on this dedicated page. Check back often.) Today, we are going to be trying out a recipe from pioneering screenwriter and director Frances Marion.

Marion may be well-remembered today for her witty scripts (Dinner at Eight, for example) but she also tried her hand at directing. Getting conked on the head with a light on the set of Song of Love turned her off to the idea of holding the megaphone (not sure I blame her) but she continued her wildly successful writing career for many years after.

I have to give Marion credit. You have to respect her for absolutely not taking her cookbook assignment seriously. She’s a busy woman! She’s churning out scripts in both quantity and quality and now they want a recipe too? Okay, buddy, here’s your recipe. Tomato Nut Salad. You take tomatoes. You take nuts. You have a salad.

I can respect this. But let’s see how good the recipe is.

“Sour cream dressing can also be used for other kinds of salads.” Really? This exotic “sour” cream has other uses? I am so happy they told me this, I never would have figured it out on my own.

I did not make my own sour cream. Out of respect for Frances Marion’s legacy of laziness (in the best way possible) I just went to the dairy case and bought the stuff ready-made. Ha! Take that, Photoplay! I also did not garnish it with parsley because I forgot. I used good cherry tomatoes as the larger varieties looked vaguely anemic. I sliced them in half as I did not relish the idea of chasing rolling little spheres around a plate with my fork.

It came out looking pretty nice, I must say. 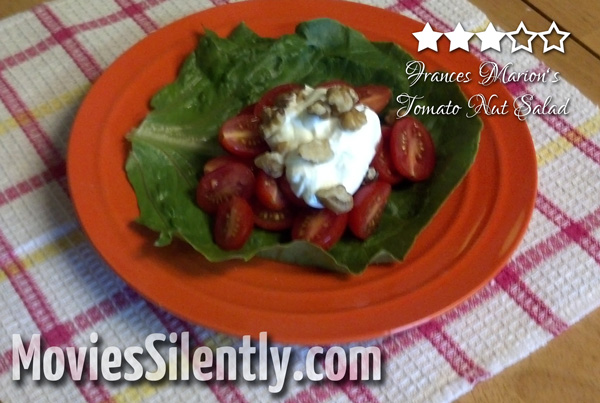 Here is my taste test video:

My Rating: 3 out of 5. With such a simple recipe, it all comes down to your ingredients. Good tomatoes and fresh walnuts? It should be okay.  I have to say, though, I did not really care for the tomato-walnut combination. I didn’t hate it, it just wasn’t a pairing I ever would have made on my own. I think the astringent quality of the walnuts fights with the acid of the tomatoes.

This recipe garners a solid so-so from me. It’s not amazing in a bad or good way. Just okay.

Can it be improved? Yes! I substituted a Pink Lady apple for the tomato and thought it was absolutely killer. Kind of a deconstructed Waldorf Salad. I have actually been eating this for breakfast lately. Any crunchy, tangy apple will do. I can see it working with Fuji, Jazz, Honeycrisp or any other tasty little apple the stores might carry. This would have been a 5 star recipe if Marion had called for an apple.

I love tomatoes (they are my favorite produce-of-questionable-botanical-category-due-to-old-tariff-laws) but this recipe was made for apples.

Variations: If you or someone you want to prepare vintage salads for are unable to eat dairy, you can try this recipe with vegan sour cream. (This recipe contains soy. Just saying.)