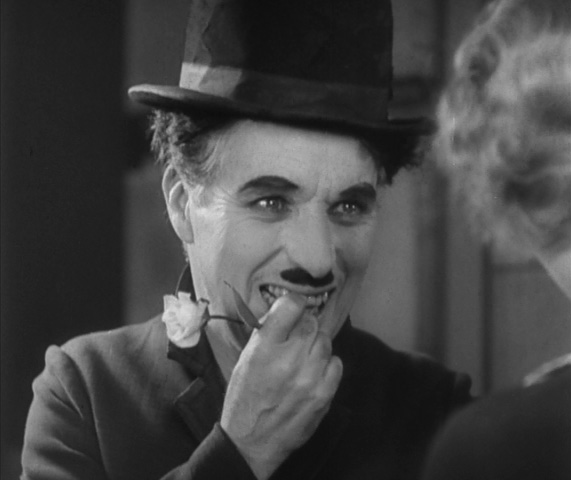 By 1931, the silent film had gone the way of the dodo. And yet one of the most popular comedians in the world managed to avoid the talkies and produce an acclaimed and beautiful silent movie. City Lights is the story of a blind girl and a little tramp. Comedy, pathos… In short, a Charlie Chaplin film.

Home Media Availability: Released as a DVD/Blu-ray bundle by the Criterion Collection.

In defense of silent film.

City Lights is an acknowledged classic, beloved by film buffs and casual viewers alike. It has had a special place in my silent movie collection for quite some time. You see, it was the first silent film that I fell in love with.

A little background is in order, I think.

I was raised sans cable by parents who loved classic movies. While the other kids were watching Teenage Mutant Ninja Turtles and squealing over New Kids on the Block, I was immersed in Flash Gordon, Bringing Up Baby and Laurel & Hardy. When the world was mad for Titanic, I was binging on Bogart. My friends were welcome to DiCaprio and the Backstreet Boys. I had Errol Flynn, Melvyn Douglas and the Marx Brothers and I don’t regret it a bit.

I was always surrounded by books in general and history books in particular; I especially liked books on the history of movies. After a while, though, I started to notice that there were mysterious gaps in the story. 1930 seemed to be the earliest release date to be covered in depth and yet I knew that the moving picture had existed for years before that. Most of the books tended to summarize silent films in a few pages with mentions of Valentino, The Great Train Robbery, the dancing dinner rolls scene from The Gold Rush and a couple words about slapstick. I had seen early Mutt & Jeff cartoons (those funky re-drawn and re-colored versions) and Felix the Cat but I had never seen a real silent feature.

One day, I decided that I was going to try out these silent films for myself. I was hoping for something with Lon Chaney since I had always heard about his makeup skills.

This was in the middle of the VHS to DVD transition and YouTube had not yet been invented. Online rentals were just barely getting started and brick-and-mortar stores were still the place to get movies. So I tripped down to my local (overpriced) Blockbuster and went digging for silents. This was a bit of a challenge as Blockbuster stores, at least all the ones I have been in, do not separate their classics from their modern films. (Some folks are mourning Blockbuster. With all due respect, I think they’re nuts.)

Anyway, I came up with a silent VHS in a battered case and off I went to watch my exotic find.

The tape I got was faded and a bit warped, which made the organ score annoying in the extreme. I wasn’t used to the acting style and the plot seemed gothic and odd.

So, strike one for the silents. However, I decided to give them another chance. What about Chaplin? He pretty much symbolizes silent film, right? To be honest, that was all I knew about him, along with the vague idea that he was considered controversial and that there was an Oscar-winning biopic about his life and career. Well, it seemed worth a try. I went back and rented a copy of City Lights. And here we are.

Silent films are smack-dab between sound movies and books. They ask a lot of the viewer. We must imagine the performer’s voices and the sounds of the film. When they are done right, silents are hypnotic. They place the viewer into a state that is half-dream, half-concentration. Sound films cannot produce this feeling and I experienced it for the first time with City Lights.

Well, that was that. I was an addict! I raced around, watching all the silents I could get my hands on. There were hits (The Cabinet of Doctor Caligari, The Beloved Rogue, The Sheik) and misses (Birth of a Nation) but I kept going. I devoured The Parade’s Gone By… and any other books on the topic that were to be found at the library.

I became very unpopular at movie nights because… well… silent movies. And City Lights started it all.

(Oh, and you’re probably wondering about that first silent movie I saw. Well, I shall be reviewing it next week!)

City Lights has been reviewed hundreds of time so I am going to approach it from a different angle: Why is this film such an ideal introduction to silent movies?

The story is universal

Pathos is a word that gets used again and again to describe the Chaplin style and with good reason. He asks for our laughter and our sympathy. In order to accomplish this, Chaplin would tap into dreams and desires that are universal to the human race.

City Lights is the story of a tramp (Chaplin) who is ignored and abused at every turn but he maintains his hope that romance and acceptance are just around the corner. The tramp falls hopelessly and unconditionally in love with a blind flower seller (Virginia Cherrill). Through a series of misunderstandings, she comes to believe that he is a millionaire. Smitten, the tramp keeps up the illusion. He is a romantic figure for the first time in his life.

The third main character is an actual millionaire (Harry Myers), who is the tramp’s best friend when he is drunk but is heartless when sober. Through the millionaire’s drunken generosity, the tramp is able to continue his charade and help his love at the same time. This arrangement cannot last and the tramp is forced to take some desperate steps in order to restore the flower seller’s eyesight.

Human beings, no matter what culture we belong to, crave acceptance and love. Chaplin manages to incorporate these desires into City Lights without being cloying or manipulative.

City Lights was in production for over three years before its release. In late-1927 and early-1928, there was still some debate as to whether the talkies were a fad. However, it quickly became clear that the public wanted sound movies and only sound movies. Sound sequences were cobbled onto silent films and theaters everywhere were equipped for sound.

Chaplin could have easily turned City Lights into a talking picture. He certainly had the time and the resources. What he did not have was the desire. Chaplin considered his position but he believed in the power of the silent movie and felt that pantomime was the secret to his international appeal. He made the risky decision to not only make City Lights a silent movie but to make it the best silent movie possible. He hoped that by making the case for silent movies, he would be able to revive them as a popular artform.

Chaplin failed in that ambition but he succeeded brilliantly in making City Lights a silent film that would appeal to a talk-crazed world. The film smashed box office records and was acclaimed by contemporary critics.

It fulfills audience expectations and surpasses them

Newcomers to silent film usually come in with some preconceived notions. I know I did. They expect slapstick and stylized action. City Lights delivers both of these thing but it also has more sophisticated elements that elevate the comedy to a higher level.

People who have not seen a lot of silent films tend to think of intertitles as a dialogue replacement with a one-to-one ratio. Chaplin’s films were never as heavy on title cards as those of, say, D.W. Griffith or William S. Hart. City Lights follows this pattern. The cards are used when needed but most of the story is told in pure pantomime. And those intertitles can be hilarious.

My favorite is a pair of titles shown when the soused millionaire is driving the tramp home.

Tramp: Be careful how you’re driving.

Millionaire: Am I driving?

It avoids the most common pitfalls of classic film

There are a few aspects of classic films that sometimes turn off new viewers. Overwrought love scenes can come off as laughable. City Lights features many love scenes but they are sweet and delicate, almost ethereal. The tramp’s well-meaning deception is so fragile that the characters seem to tiptoe around it. Chaplin’s deep understanding of his character makes the love scenes some of the best parts of the film.

The film also sidesteps racial stereotypes. Whatever their race, the characters are funny because of who they are as people.

Its simplicity makes it timeless

The leads of City Lights do not want much. Love, health, a stable life. They aren’t out to rule the world or even to save the world. They just want to snatch up a little bit of happiness for themselves.

Simplicity is underappreciated but any artist will tell you that it is one of the most difficult things to achieve. Fancy, epic films have enough gingerbread to distract the audience from any flaws. However, nothing ages faster than gingerbread. Special effects may not seem so special after a few years but intelligent acting and a clear story are timeless.

City Lights is simple because of the amount of work that Chaplin poured into it. It succeeds because of that simplicity. It is a beautiful film and an eloquent ambassador for silent cinema. Everyone should see it at least once.

City Lights just got a spiffy DVD and Blu-ray release from the Criterion Collection.