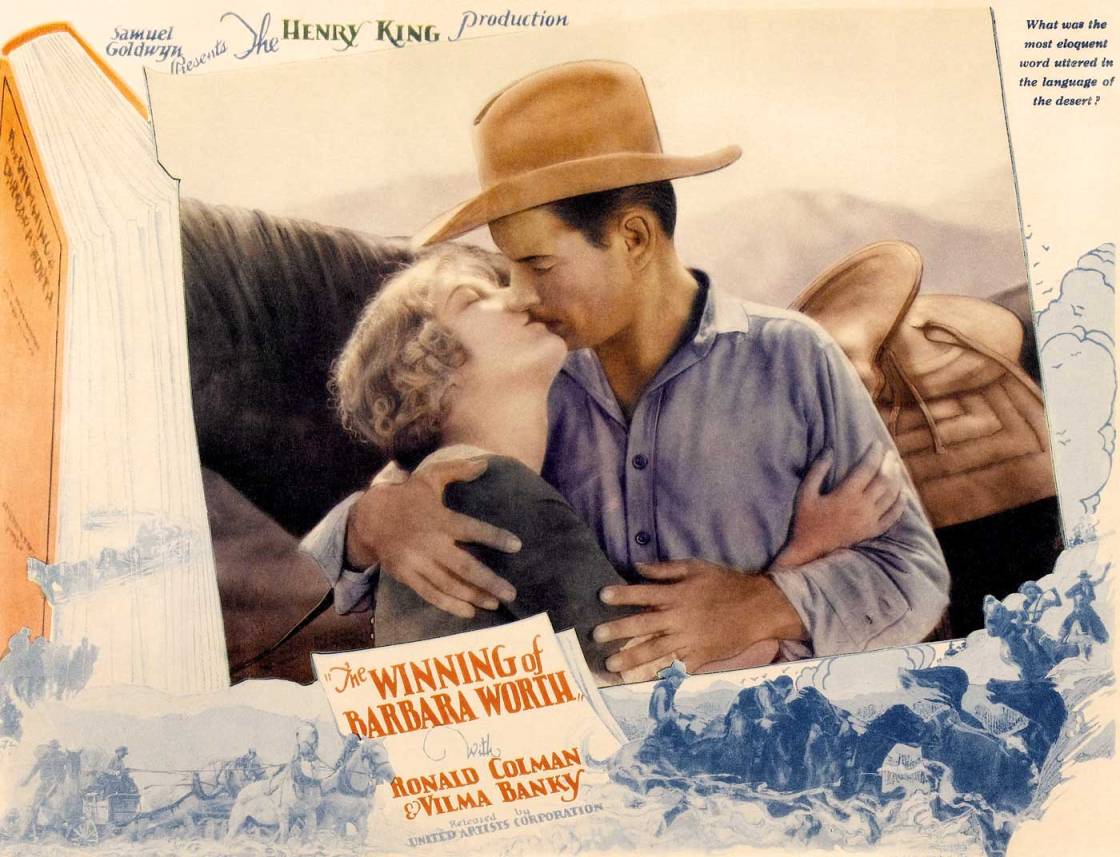 The Winning of Barbara Worth (1926) A Silent Film Review

Vilma Banky takes on the title role of this Western-set tale of settlers, dams, floods and legal shenanigans. Banky is the prettiest girl in Imperial county. Ronald Colman is the corporate raider from the east who falls for her. A very young Gary Cooper is the local boy who hopes to win her heart. So, just who does win Barbara Worth?

In the 1920s, Sam Goldwyn had a European leading lady who was raking in the box office cash like crazy. Vilma Banky, the dainty Hungarian beauty, was the top draw at the box office. Audiences today probably recognize her because of her two films with Rudolph Valentino but she was most often paired with Ronald Colman. The duo co-starred in five films between 1925 and 1928. Only two are known to survive, The Winning of Barbara Worth and The Night of Love. The latter was mentioned in Bonnie (as in “and Clyde”) Parker’s journal. She liked it. (The Magic Flame is also rumored to exist but I am holding out for further confirmation.)

Vilma Banky’s films enjoyed lavish production values and the very best supporting cast money could buy. The Winning of Barbara Worth was filmed in Nevada and Imperial, California (the actual setting of the original novel) and featured a climactic flood that remains one of the more famous action sequences in silent film.

But I am getting ahead of myself. First, here is a brief synopsis of the story.

Barbara Worth (Vilma Banky as an adult, Carmencita Johnson as a child) is the daughter of an unfortunate husband and wife (the latter also played by Banky) who were not able to cross the harsh California desert alive. Barbara was adopted by Jefferson Worth (Charles Lane), a man who has the dream of bringing irrigation to the harsh land.

Barbara matures into a beautiful woman (she is Vilma Banky, after all) and a true lover of the desert. She is joined in that love by Abe Lee (Gary Cooper, only a year after his first confirmed Hollywood role), who grew up with her and has loved her for years. Barbara, however, sees him only as a sibling. Abe is one of Jefferson Worth’s staunchest supporters in his quest to bring water to the desert.

However, to get water, there needs to be money. Enter James Greenfield (E.J. Ratcliffe), a New York money man, and his foster son, Willard Holmes (Ronald Colman), an engineer. Their money and know-how will make Worth’s irrigation dreams a reality. Willard, however, is much more interested in Barbara than in dams and canals.

So, our love triangle is in place and, needless to say, our money man is all poised to double cross his partner. Villainy afoot, in short. So, will the desert get irrigated? Will the heroes prevail? And just who wins Barbara Worth? See the film to find out!

Since we are talking about screen teams, let’s discuss why the combination of Vilma Banky and Ronald Colman worked so well.

Vilma Banky was an accomplished actress, yes, but she also possessed the ethereal delicacy that was prized in costume drama heroines during the 1920’s. (For examples, look to Mary Astor, Mary Philbin and Dolores Costello) She was born to play ladies, princesses and dainty diamonds in the rough.

Ronald Colman managed to be both affable and elegant. His sophisticated persona and dark good looks contrasted gloriously with Vilma’s fair appearance. Of course, Colman’s greatest asset was his wonderful speaking voice and so his silent film appearances do lack a certain flair that is present in his talkies. However, he is still a delightful leading man.

Best of all, Colman and Banky had chemistry. Not the white hot variety that viewers may expect after seeing Miss Banky in The Son of the Sheik but a more subtle and sophisticated appreciation of one another’s charms. This is not meant as a slam to the Valentino/Banky combination, simply an acknowledgement that the tone of the relationship is different.

I should note, though, that The Night of Love (made one year after Barbara Worth) reportedly features all the brooding, abduction and passion a Sheik fan could wish for. That film, however, is presently unavailable to the general public.

I wager, though, that most modern viewers will want to see this film for a peek at Gary Cooper in his first major feature film role. I am pleased to report that young Gary does not disappoint. In fact, he very nearly walks away with the picture. Come to think of it, the only reason he doesn’t steal the whole movie is that he just does not have that many scenes compared to the other leads.

This early success can also be attributed to the fact that Gary’s character is just more appealing than Ronald’s. He is loyal, bold, a tad mouthy and an all-around good guy.

Ronald Colman’s character starts out heartless but then grows into a caring man who believes in the dream of a desert oasis. However, this evolution is so sudden that the audience is a bit taken aback and I think the character is weakened as a result.

In fact, the main flaw of this film is the scenario. Based on the novel by Harold Bell Wright, the film takes over 500 pages of novel and covers them in just under an hour and a half. It is inevitable that elements feel rushed and pieces seem to be missing. By the way, the book is in the public domain and may be downloaded free of charge.

This also means that the colorful supporting characters get shorted. It is natural for a movie to focus on its biggest stars (that’s what the public is paying for!) but I would have liked to know more about the assorted eccentrics who populate the deserts of the film. I was particularly charmed by funnyman Clyde Cook, who provides a bit of comedy relief.

Director Henry King had a career that ranged from directing The White Sister to The Black Swan. He did musicals, adventures, dramas and Big (capital Big!) epics. However, King had a special gift for Americana. This sub-genre is quite difficult to pull off without descending into treacle but King’s Americana films were sincere, sensitive and completely enjoyable (watch 1933’s State Fair and 1921’s Tol’able David to see him in action).

While The Winning of Barbara Worth is not exactly down-home-on-the-farm, it is well within King’s comfort zone. He does such a good job of establishing the blistering desert atmosphere that the bright yellow sunlight tinting seems superfluous. Everything looks and feels gritty and lived-in. With the exception of the leads (who sport hair either oiled and marceled), the characters look like they have been living in the desert and battling the elements.

I was particularly impressed by the flood sequence. I know, I know, miniatures were used but they were really excellent miniatures. Further, the acting and direction is heart-pounding! King allows his performers to show real panic as they flee the approaching floodwaters. Cowardice is interspersed with bravery for an all-too-real climax.

Another excellent scene is the sequence in which Willard and Abe must defend themselves and the payroll from bandits. It is fast-paced and genuinely suspenseful.

Unfortunately, all of the best scenes in the film seem to leave out Barbara. Vilma Banky was an excellent actress but I wish she had been allowed to be more active in the plot. While she encourages the heroes, tries to calm a mob of angry workers and helps rescue the flooded-out civilians, not much of what she does really moves the plot. One could argue that she is the one who motivated Willard to embrace the dream of reclaiming the desert but he was not persuaded by her.

A quick side note: Over the years, I have heard a lot of people complain that desert-set films like The Winning of Barbara Worth and The Wind exaggerate the power of a desert windstorm. As a born and bred desert rat, let me assure you that desert winds are indeed blinding, loud and terrifying. I have added some links with video of sandstorms in the California desert.

The original novel is not exactly a household name today but, as it deals with the reclamation of the desert in the Imperial Valley, it remains an important part of local history. My Imperial Valley-dwelling friend was gracious enough to provide an image of a street sign proving this fact.

The Winning of Barbara Worth was released on DVD by Warner Archive.