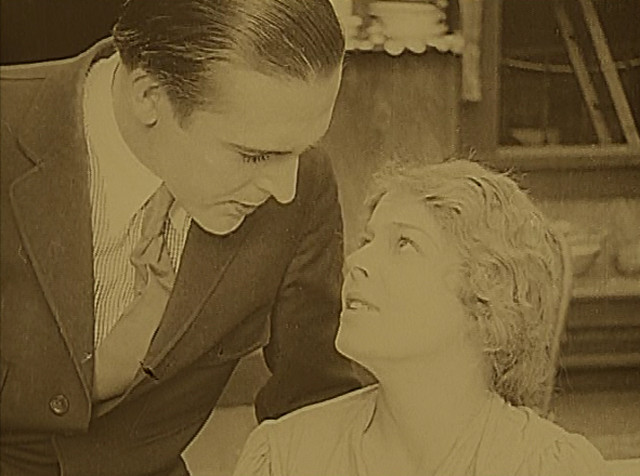 Cinderella has ulterior motives in this early DeMille melodrama. Mary Denby is a judge’s daughter who married below her station. With her husband drinking away the household income, she applies for work as a seamstress. The new job puts her in contact with a rich family who decide to use her beauty and charm to their advantage in business dealings. Nice people.

Well, that’s what happens when you will marry commoners

1915 was busy for Cecil B. DeMille. The Golden Chance was one of fourteen motion pictures that he directed in the year. Of those fourteen, Carmen and The Cheat have become popular among silent film aficionados while The Golden Chance has been largely forgotten. And yet, it is the film that gets mentioned again and again when historians discuss the title that turned them into DeMille fans.

What does The Golden Chance have that makes it so great? Looks like we are going to find out!

Mr. Hillary (Ernest Joy) is a businessman with a tempting business opportunity but he needs the backing of Roger Manning (Wallace Reid) to make it happen. Manning is not inclined to go into business with Hillary and, anyway, he is leaving town the next day. Cunning Mrs. Hillary (Edythe Chapman) entices Manning to a dinner party at her home with promises of introducing him to “the most beautiful girl in the world.”

Meanwhile, on the other side of town—and on the wrong side of the tracks—Mary Denby (Cleo Ridgely) is in the “repent at leisure” stage of her hasty marriage to a day laborer. A judge’s daughter used to the finer things in life, Mary lives in a slum with her alcoholic husband Steve (Horace B. Carpenter). Steve drinks away the family income and commits burglary to supplement his habit. Near destitute, Mary takes a job as a seamstress at the Hillary home.

Mrs. Hillary is in a panic because her beautiful guest has cancelled and she has no one to entertain Mr. Manning. Mary’s pretty face and genteel manners give her an idea: Mary will be Cinderella for a night. Manning is enchanted by Mary. So enchanted, in fact, that Mrs. Hillary is able to persuade him to stay as a house guest for the entire weekend.

Mary enjoys her return to society and the attention of handsome Mr. Manning. While she feels a little guilty at her deception, she tells her husband that she has taken a temporary position out of town and will be back soon. Once Mary is gone, Steve’s partner in crime, Jimmy the Rat (Raymond Hatton), tells him that a mysterious, jewel-bedecked lady has shown up at the Hillary home as a weekend guest. An ideal target for robbery…

The Golden Chance is a good melodrama and it touches on such diverse and controversial topics as adultery, spousal abuse, abuse of power and poverty. Unfortunately, it does have its moments of heavy-handedness.

Steve Denby is such a wicked character, I am at a loss as to why an intelligent and beautiful girl like Mary would ever fall for him. Horace B. Carpenter plays Steve as a villain of the Snidely Whiplash school. No roguish charm, no motivation, just evil for evil’s sake. Just the sort of day laboror who would marry a judge’s daughter.

This is likely because Mary’s extramarital flirtation would not be tolerated by audiences of the day unless she had a very good excuse. DeMille would further refine his technique of evading censors and decency leagues later in his career.

The performances of Ernest Joy and Edythe Chapman as Mr. and Mrs. Hillary are more nuanced. While not overtly evil, they are completely self-absorbed and have a ruthless streak. They use Mary to get what they want and abandon her without compunction.

The Golden Chance is does boast likable leads. Cleo Ridgely is not a well-known name even among silent film fans. Her beauty is very modern and sporty, different from the china doll look so favored at the time, more 1985 than 1915. Her performance is good, although her scenes with Steve are understandably over the top.

Wallace Reid is featured as a decent, all-American sort of hero, the kind of role he could play with his eyes closed. He and Miss Ridgely work well together, they were teamed several times in the ‘teens, and I know I was rooting for their characters to pair off.

In spite of its flaws, The Golden Chance is worth viewing. DeMille’s use of light and shadow, courtesy of cinematographer Alvin Wyckoff, is on display. The burglary scene in particular has some stunningly beautiful moments with light, dark and smoke. In general, this is a tight little melodrama that is well worth the view.

The Golden Chance was released on DVD by Image bundled with Don’t Change Your Husband.