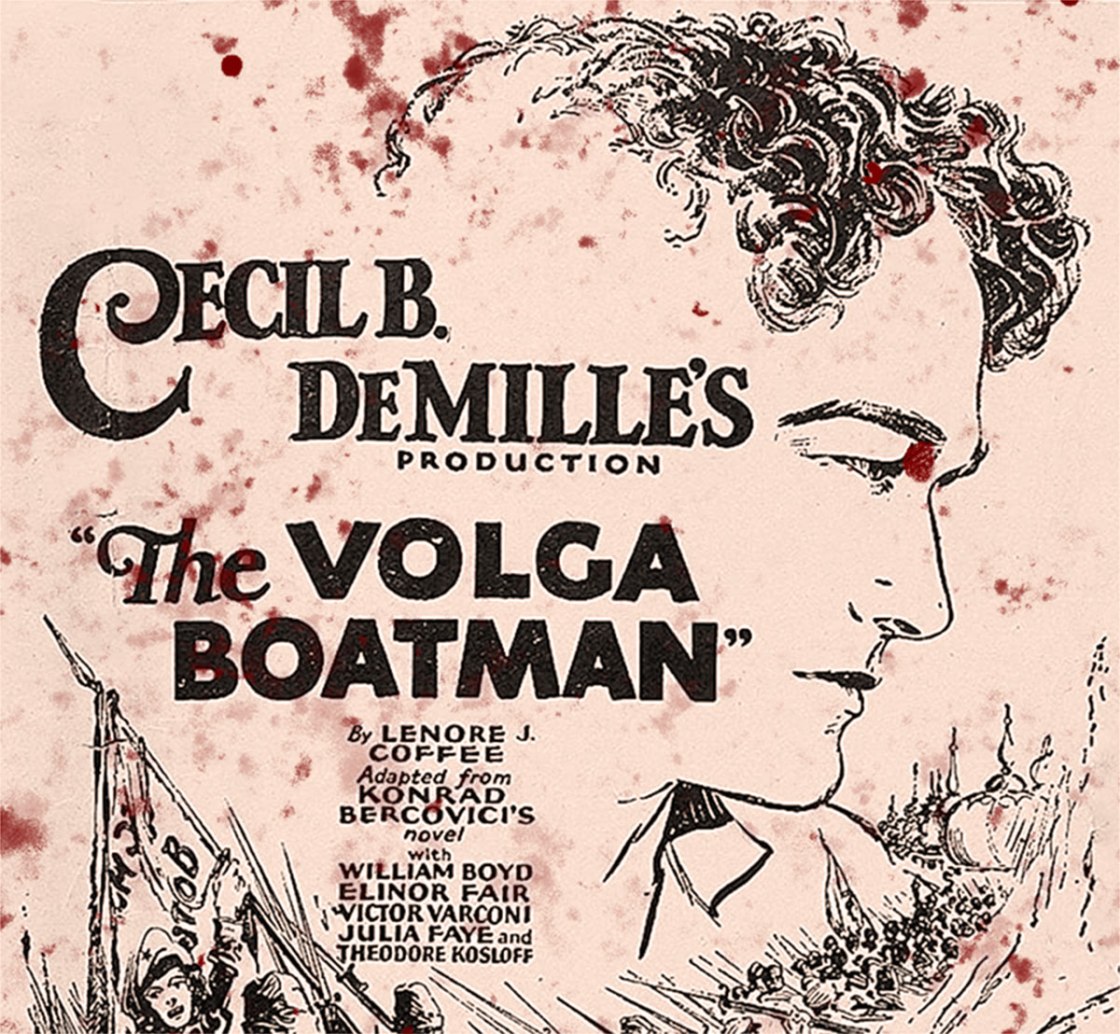 He’s a Bolshevik. She’s a princess. Can they find love? Of course they will! Riding roughshod over historical accuracy and narrative logic, The Volga Boatman still manages to be a rollicking (if air-headed) good time.

This Revolution is just ruining his love-life…

Bonus: I will also be reviewing the 1956 Russian classic The Forty-First. Click here to skip to the talkie reviews.

Cecil B. DeMille was a staunch supporter of efforts to uproot suspected Communists from Hollywood during the forties and fifties. It was probably a good thing for him that silent films did not have a popular audience at the time. He would have had a hard time explaining The Volga Boatman. (He is certainly a bit sheepish about it in his autobiography.)

Made while DeMille was in the business of independent production, The Volga Boatman is a frothy romance set in the darkest days of the Russian Revolution. The Revolution was less than a decade old when production began. There was not much reliable information coming out of Russia at the time but that didn’t stop Hollywood from making a collection of Revolution pictures. Then, as now, torn from the headlines equaled ticket sales.

DeMille never had a problem rearranging history to fit his plot (he called it telescoping) and the setting of The Volga Boatman gave him a relatively blank canvas to work with. With Russian emigres hired on as advisers and a cast of his favorite actors, DeMille set to work creating another hit.

Of course, there were a few slight problems. To start with, the title character, Feodor (William Boyd), obviously had to work as a boatman on the Volga. Basically, they were men called burlaks who dragged barges down the river. But there had not actually been a boatman working on the Volga in quite a stretch and the advisers pointed this fact out. However, being a boatman gave DeMille an excuse to pose Boyd in an open shirt. A little something for the ladies. You can guess which consideration won.

Plus, The Song of the Volga Boatman is really the only Russian song that most Americans know. Well, that and Ochi Chornya but somehow I don’t see that on a theater marquee.

The plot involves a romance between Feodor and Princess Vera (Elinor Fair). The proud Vera is engaged to Prince Dimitri (Victor Varconi) but that doesn’t stop her from ogling manly-man Feodor when she sees him hauling his barge. Clearly the open-shirt idea is working but Feodor has no time for romance with the princess; he is caught up in the fever of revolution.

Then word comes—written on red paper, no less—that the glorious revolution has begun. Feodor leaves the river and joins the Red Army, rising quickly through the ranks (and keeping his open-shirted ways).

Prince Dimitri, naturally, joins the Czarist White Army. Vera is alone with her father when the Red Army storms the castle. In the ensuing fracas, one of Feodor’s friends is shot. Mariusha (Julia Faye), a gypsy girl turned soldier who is in love with Feodor, leads the call for Vera to be shot in retaliation. Feodor agrees and is left alone to carry out the execution.

If this were a Russian movie, poor Vera would likely be one dead tomato but this is an American film and the hero cannot shoot the heroine.

Not before intermission, anyway.

“I’m kind of overthrowing your whole way of life… we can still date, right?”

Vera has nerves of steel and she is ready to die as a martyr to her cause. Feodor’s nerves, meanwhile, are fraying badly. He can’t bring himself to shoot her. Suddenly, he sweeps Vera into a patented, whiplash-inducing DeMille embrace and kisses her.

Feodor fires a shot into the ceiling and goes to convince his comrades that he has killed Vera. Jealous Mariusha sees through the deception. Feodor grabs Vera and makes a break for it. They get away but their troubles are only beginning. Feodor hates Vera and himself because he didn’t have the guts to shoot her and now he is a traitor to his cause. They can’t take shelter with the Reds or the Whites. Worse, they are in Red territory and Vera’s aristocratic appearance is attracting suspicion.

Just when it seems that the situation couldn’t get any graver, word reaches Prince Dimitri that a Red officer has abducted Vera. Fearing the worst, he sets out to take revenge. Of course, by this time Vera and Feodor are starting to find one another irresistibly, and inconveniently, attractive.

What can I say? It’s DeMille.

If the chemistry between William Boyd and Elinor Fair seems real, that’s because it was. Boyd proposed to her during one the love scenes.

The Volga Boatman was a hit for DeMille and launched Boyd as a star. His natural charisma and intense good looks go a long way toward making the film enjoyable. He attacks the silly material with utter sincerity and the approach adds a lot of dignity to a pretty thin role. On a side note, Boyd’s performance did not go unnoticed by his future wife, Grace Bradley, then a schoolgirl. She was smitten with Boyd, writing his name all over her schoolbooks. Eleven years later, Grace was an actress and had become the fifth and final Mrs. William Boyd.

Returning to the cast, Victor Varconi is excellent as the cruel and morally weak Prince Dimitri, who is ready to kill both Feodor and Vera for the glory of Old Russia and because she doesn’t want to marry him anymore. Villainous roles don’t come much jucier. Elinor Fair’s elegant and open-minded princess finishes out the love triangle. Miss Fair is lovely to look at but she seems to do haughty better than romantic so as a result, her character is much more interesting at the beginning than at the end of the film.

The supporting players are not up to the same standards. The comedy relief provided by Julia Faye and Theodore Kosloff—a DeMille regular and one of the few actual Russians in a leading role—is groan-inducing.

Another problem with this film involves the script. DeMille seems to have confused his revolutions. The revolutionaries look so much like sans-culottes that I half expected the Red Army to storm the Bastille instead of the Winter Palace. I think someone watched Orphans of the Storm a few too many times.

It doesn’t help that the people involved in the revolt never actually mention why they are rebelling except for vague complaints of injustice.

I’m not saying they should be sitting around reading Marx’s manifesto but his political theories made up the central philosophy of the revolution and filming a Communist revolution movie without actually mentioning Communism seems a little silly. Come to think of it, they never mention the Czar either. It’s sort of like setting a movie during the American Revolution and never mentioning taxation, democracy or King George.

The fact is, though, most character’s motivations can be put down to the idea that both sides just want to date each other’s women. It kind of gives you the feeling that if someone had just organized a giant, inter-class singles party, the whole revolution thing could have been neatly avoided.

The Volga Boatman is a classic romance in the breathless vein and for all its faults it works well as escapist entertainment. It’s just that the complicated period in which it is set doesn’t lend itself to the genre. The film is worth seeing for Boyd, Varconi and Fair. Plus, it gives you bragging rights in the film geek circuit to say that you saw a DeMille movie where the hero is an unrepentant Bolshevik. Played by William “Hopalong Cassidy” Boyd, no less!

The Volga Boatman has been out of print for a while but has recently been re-released on DVD by the Video Cellar. Judging by their previous output, the print is likely rough and probably has a canned score.