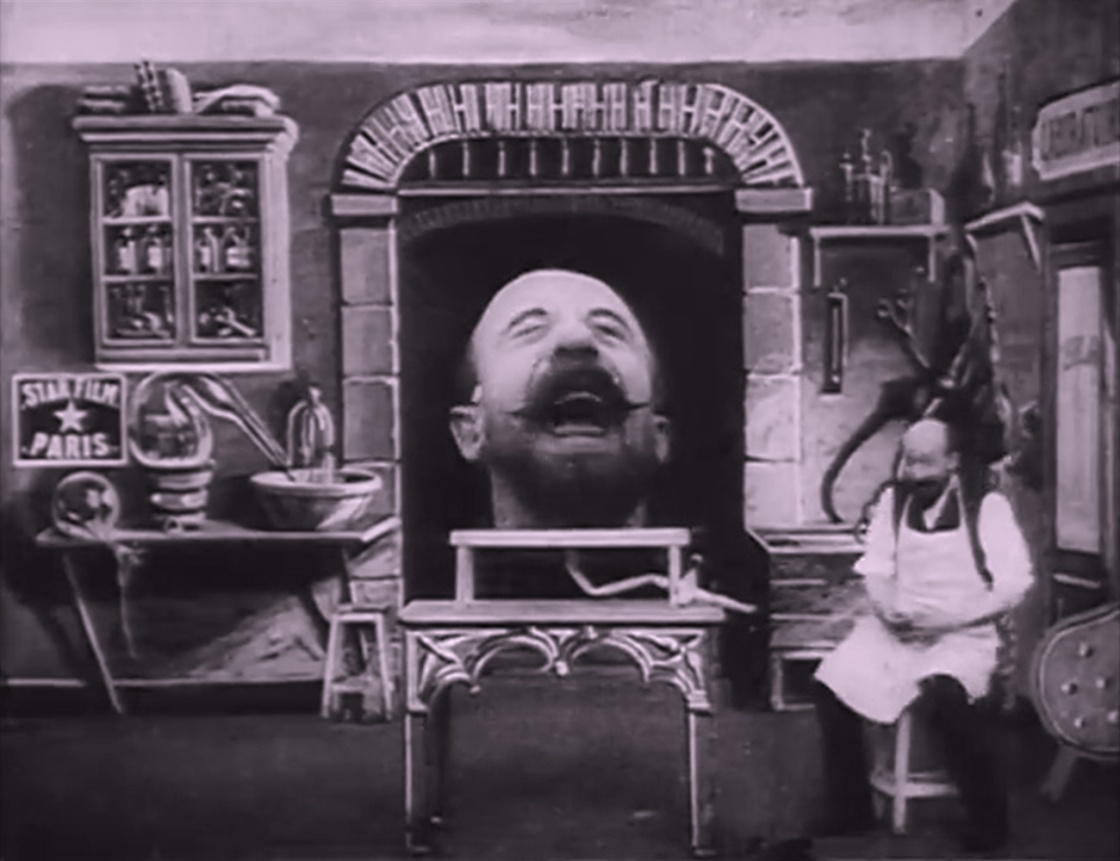 The Man with the Rubber Head (1901) A Silent Film Review

There are few things I have enjoyed more than my slow and steady dive into the filmography of pioneer Georges Méliès. A Trip to the Moon is the iconic image of early film but his body of work was far more varied than just special effects and exploding lunarians. (A Trip to the Moon itself was far more complicated than viewers may realize but that is another story.)

Méliès filled his filmography with reenactments of big news stories, political commentaries and some shockingly dark content, all using cutting edge special effects that had their origins on the stage. As a seasoned illusionist, Méliès was uniquely positioned to enchant moviegoers but he also had one trick up his sleeve that many of his stage brethren did not have—and some still don’t to this day:

He knew how to play to the motion picture camera.

This may seem obvious, but it has tripped up many a stage superstar trying to make the jump to the movies. We saw that Méliès firmly grasped this concept from his very earliest films, such as The Vanishing Lady. We see it again in the delightful 1901 treat, The Man with the Rubber Head.

The film takes place in the laboratory of a chemist (Méliès). He sets up a table and plops a disembodied head (also Méliès) onto it. The head talks and laughs—and then the chemist produces a large set of bellows and inflates the head to a gigantic size.

The head is delighted by its new stature but then the chemist lets out the air and it returns to normal. Things take a tragic turn when the chemist’s assistant has a try at the bellows. Despite the alarmed chemist’s pleas, he inflates the head too quickly and it explodes in a puff of smoke. The chemist swift defenestrates his assistant and then weeps over the fate of the head.

As always with Méliès, it’s important to examine the world of stage magic in order to appreciate what he brought to the screen. Decapitation and talking head tricks were wildly popular and there were many variations. Actual decapitations were reenacted using trick cabinets—though these were seen as an old hat by the 1890s. A more spiritualistic variation involved the decapitated head of an Egyptian princess coming to life and telling her tale of woe. A lighter version featured a head of a young lady floating above the stage before blowing out a candle and disappearing.

All of the talking head tricks were accomplished by having an assistant wear a collar to clearly show the division between neck and body. After that, some arrangement of costumes, lighting, cabinets and mirrors were used to make the assistant’s body disappear, the simplest being a table with a mirror underneath, angled so that it did not reflect the audience.

Méliès employed this collar trick, though he simply needed a black background and didn’t need to worry about mirrors. The real accomplishment was the smooth double exposure and the precise synchronization that he achieved in this one-shot film. He clearly employed very precise timing to make sure that the head’s growing and shrinking, as well as its reactions, matched what was going on in the laboratory.

The growth and shrinkage of the head was accomplished through forced perspective: a dolly shot, in other words, physically moving the carriage-mounted camera closer to the performer. Méliès used this to great effect in The Mermaid. Really, the only flaw in The Man with the Rubber Head is the sometimes-obvious line of the table or cabinet obscuring the rest of Méliès’ body.

As was the case with The Vanishing Lady, Méliès took a warhorse of the stage and freshened it up for motion picture audiences. It’s likely that Méliès was also inspired by the very stylish trick photography of his time. Belle Epoque people delighted in picturing themselves beside their own decapitated heads, both regular and jumbo-sized. If you can’t have a bit of fun with double exposure, what is even the point of pictures?

By combining stage magic and trick still photography, Méliès created something new and delightful but there’s even more. If you watch his performance in his dual role as the chemist and the head, he is lively and likable. The chemist delights in his scientific breakthrough, while the giant head is confused but ultimately pleased with its flexible skull. It’s all very broad, of course, because when you watch a rubber head picture, you probably aren’t wanting subtlety, but the charisma is undeniable. I love the way the chemist sets about his work with a cigarette dangling carelessly from his mouth.

On a side note, The Man with the Rubber Head was one of three-hundred negatives stolen from Méliès’ Star Films New York branch in 1907. Management believed it to be an inside job because the thieves knew exactly what to steal. With prints of shorter films like The Man with the Rubber Head retailing at $21.50 for an American-made print (about $650 in today’s money) and longer works like The Kingdom of the Fairies commanding $162.00 ($5,000) for the cheapest version, it’s easy to see that 300 stolen negatives constituted a headline-grabbing heist. Even if all the films were the shortest Star offered (they weren’t) and only one dupe was made from each negative (dozens being the more likely goal), that was still a $200,000 robbery when adjusted for inflation.

The Kleine Optical Company circulated a list of the stolen films in case they were retitled and duplicated but the thief was caught in just a few days. The case seems to disappear from the news. I wonder if charges were dropped in exchange for the return of the negatives. (But then again, what if there is a cache of Méliès negatives hidden somewhere in New York or its environs? Considering the sheer number lost movies in his filmography, a silent movie fan has to hope.)

Méliès was in a constant battle with pirates and you can see his Star Films logo in the corner of The Man with the Rubber Head in order to discourage thieves from retitling his film and passing it off as their own. Until film copyright law was settled, hidden logos were one of several methods used to establish ownership.

The Man with the Rubber Head is a grand little picture, not as ambitious as Blue Beard, released the same year, but the kind of light illusion that was the Méliès bread and butter. It’s a short and sweet picture that is cheeky, playful and polished. Do check it out.

Released on DVD as part of Flicker Alley’s Méliès collection.