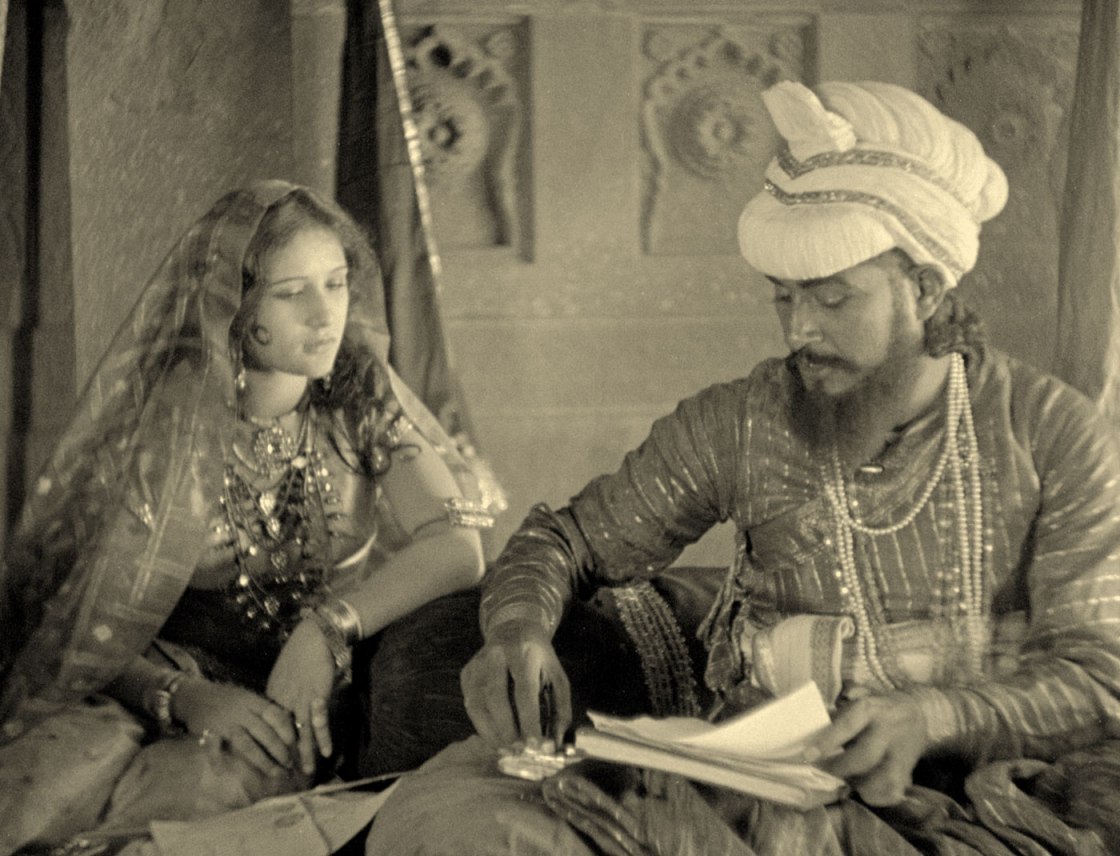 A humble potter’s mission to rescue his adopted sister takes a surprising turn when she wins the love of the Mughal prince. This German-Indian co-production takes full advantage of real-world scenery and architecture.

Fit for a Queen

By the late 1920s, the Indian film industry was bustling. Indian audiences enjoyed imported motion pictures but what they really wanted were movies that featured Indian stories and performers. Some twenty studios were active in the country at the time and were facing the challenges of distribution, financing and language with some pictures released with as many as six languages in the title cards. Demand outstripped supply.

German director Franz Osten had collaborated with Indian producer and actor Himanshu Rai to make Prem Sanyas (The Light of Asia), a film about Prince Siddhartha Gautama’s famous spiritual journey. It had been a grueling shoot with Osten suffering heat stroke and the extras were kept in the frame and out of the shade through police intervention.

What set their follow-up production, Shiraz, apart was money. The Report of the Indian Cinematograph Committee 1927-1928, which represented the interests of the British government in India, stated that Shiraz was the first Indian production they were aware of to be backed by foreign capital. The report expressed concern that there was not enough British involvement, that the Germans would gain an inroad into Indian filmmaking and that the Americans might follow their lead and take over; it went so far as to suggest that the use of foreign capital and talent was not in the best interest of Indian cinema.

There was a vigorous dissenting opinion included in the report that stated Shiraz provided valuable information about the viability of Indian cinema in foreign markets. The question of whether or not Indian movies would find fans outside their country of origin is amusing in hindsight as the country is one of the leading cinematic exporters on the planet.

So, as you can see, Shiraz is an important building block of an important filmmaking country and it was clearly designed for export from the start. One Indian landmark familiar to most non-Indians is the Taj Mahal, the lovely tomb of Mumtaz Mahal. Telling the story of this famous work of architecture was good business, especially since the film was based on a play by Niranjan Pal that had already been performed in London.

Shiraz (Himanshu Rai) is a potter living in the desert. He is in love with his adopted sister, Selima (Enakshi Rama Rau), who is actually a missing princess. Selima is kidnapped by slavers and Shiraz follows her all the way to the palace of Prince Khurram (Charu Roy), future emperor of the Mughals. As Shiraz tries desperately to find his way inside the palace, Selima falls in love with the prince.

This wouldn’t be a proper palace movie without a touch of malice and the villainess is Dalia (Seeta Devi), the daughter of a general who intends to be the empress of the Mughals by hook or by crook. She’s not above forgery and a little light poisoning to get her way.

Who will be the beloved Mumtaz Mahal? And will Shiraz ever win Selima’s freedom? See Shiraz to find out.

At the start of the film, there is an explanatory title card stating that the production was shot using natural light exclusively. While it was likely challenging to shoot this way, the result is a stunning film that is delicate and subtle. The characters interact in real palaces and deserts, are lit by real light and this gives the production heft, something solid and grounded. Sets build in studios will always have their place but nothing quite beats location shoots.

The story of Shiraz is, unfortunately, on the light side. Once the viewer figures out the identity of Mumtaz Mahal (and how could it be the bad girl), there aren’t too many surprises and Shiraz is not a terribly exciting character. He seems like a lovely guy but he likes clay, Selima and that’s about it. Himanshu Rai does what he can but there’s not much to work with. Enakshi Rama Rau’s Selima is very sweet but her character doesn’t display much initiative.

Seeta Devi undoubtably steals the show as the scheming Daria. She is so gleeful as she causes havoc in the royal court, almost condemning Shiraz to die via elephant foot at one point. This is some premium palace scheming content and the film always lights up when Daria shows her face. I also enjoyed Charu Roy’s performance as the capricious monarch.

Shiraz stands out because of its foreign backing but it is also important as one of the few surviving Indian silent films. Like the African American silent film industry, the extremely high demand and the relatively low number of prints made per film (three or four copies total) meant that these pictures could easily be played to death, which helps explain the low survival rate. (There were also the inevitable issues such flammable nitrate, such as the heartbreaking 2003 fire at the National Film Archive of India, which destroyed much of India’s surviving silent film heritage.)

When a film is exported, its chances of survival jump. Countless rare silent film treasures survived because they left their countries of origin— more copies, more places to discover them— and Shiraz is no exception. In fact, all three silent era collaborations between Himanshu Rai and Franz Osten still exist.

Rai continued to work with Osten and cinematographer Josef Wirsching in the sound era at his Bombay Talkies company but the partnership came to an abrupt end when the Germans were interned as enemy nationals at the dawn of the Second World War. (Osten had joined the Nazi party in 1936 but Wirsching had wanted nothing to do with them and preferred to remain in India.)

Shiraz is very much a hybrid production designed for international appeal and its continuing popularity proves that the filmmakers were on the right track. The story is tissue thin but the beauty of scenery and cinematography combined with the charisma of the performers make up for it. It remains a feast for the eyes nine decades after its release.

The BFI’s restoration of Shiraz has been released on DVD and Bluray. It is accompanied by an excellent score by Anoushka Shankar.