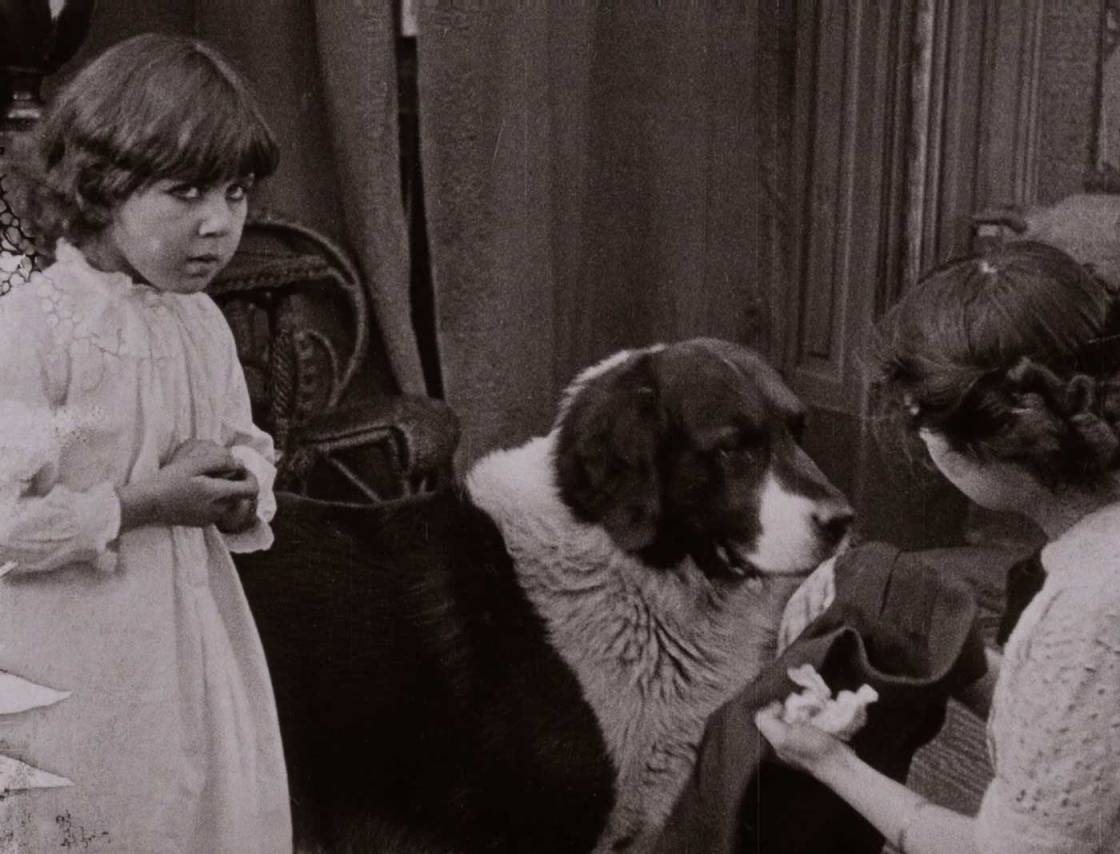 A detective allows his daughter to adopt a stray dog, which comes in handy when a group of counterfeiters tie him to a sawmill and he needs prompt rescuing. A broad melodrama from Alice Guy’s Solax studio.

A Dude in Distress and His Dog

The genius dog rescue picture had been a fixture of the movies from the beginning. Rescued by Rover, featuring an enthusiastic collie, was an early blockbuster and it proved to be so popular that the negative wore out. Audiences have never been able to get enough canine heroism and so it is unsurprising that director Alice Guy would feature such an animal.

The Detective’s Dog opens with Detective Harper (Darwin Karr) bribing the dogcatcher so that he will release a stray dog, Jack, from custody. (I was unspeakably delighted to learn that Jack’s real name was Lewis Solax.) His daughter, ironically named Kitty (Magda Foy), has fallen in love with Jack and while Mrs. Mary Harper (Blanche Cornwall) isn’t thrilled, she agrees to let the dog stay.

Meanwhile, Richard Toole (Lee Beggs), is living up to his name and spending large counterfeit bills. (I can’t say I was happy about the antisemitic gags at the expense of one of his victims.) This looks like a job for Detective Harper of the Secret Service! Harper follows Toole to his hideout but is immediately captured, tied to a sawmill conveyor belt and left to his doom.

And this, this looks like a job for Jack the wonder dog! Mrs. Harper realizes that something is wrong but is ignored by the local police department, so she has Jack sniff one of her husband’s coats and then race to the rescue. Will Jack arrive in time or will Detective Harper end up beside himself? See The Detective’s Dog to find out!

Longtime readers will immediately recognize why I chose to review this picture: one of my pet peeves is when people who have never seen silent movies absolutely insist that they regularly featured damsels being tied to train tracks and sawmills by villains with handlebar mustaches. I have been debunking that myth for years but the basic gist is that the trope was an old hat even back in the early silent era; when it did happen in a serious manner, the victims were usually men; and the vast majority of the examples brought up are from broad comedy spoofs of older stage melodramas. In any case, the trope wasn’t nearly as common as the home invasion robbery.

The sawmill trope was popularized in the play Blue Jeans, which featured a male victim and a female rescuer. (By the way, Greta Gerwig used this setup during a theater scene in the 2019 version of Little Women. It was just a background detail but, reader, I squeed.) Owen Moore was threatened with a similar fate and rescued by women in the 1926 film Married? and, of course, Detective Harper is imperiled here and saved by his dog. (However, the dog was dispatched by Mrs. Harper, so she deserves some rescuer credit.)

The long and the short of it is that this film further confirms my other findings about this particular melodramatic situation. This is important because “Oh, those movies with sawmills and train tracks” dismisses silent films as an art and erases the bold action heroines of the period. So it’s wrong and wrong in a harmful way.

As for the film itself, the acting is a bit on the hammy side for this era but it’s to be expected considering the plot and the genre.

One important thing to remember is that silent era filmmakers and audiences alike were well aware of what hokum was and they also knew how to embrace it. While it might be a bit much to say that such films were tongue-in-cheek, they were definitely not 100% serious. We might compare this to the notoriously corny dialogue in a certain stellar conflict series; the audience has agreed to play along and the filmmaker has agreed to play it straight and a good time is had by all. (For a slightly later example of this in action, see Nomads of the North.)

So, with this context in mind, the broader acting in The Detective’s Dog makes sense. It was spread on thick by design. That being said, the film definitely is of its time with the older style painted sets mingling with real streets and buildings. The 1910s were a period of transition for the movies unrivaled by even the talkie revolution so it was inevitable that the new and old would circulate together for a time.

The print I viewed is not complete and cuts off (spoiler) right when Jack frees Harper from the sawmill. A vintage synopsis in Moving Picture News fills in the gaps: “The detective telephones for the police and the criminals are arrested. The dog has proved his gratitude for the kind action, and earns the gratitude of the whole family.”

While researching this review, I stumbled upon the most delightful factoid. The Detective’s Dog has a sequel. There was another picture featuring Detective Harper released just one week later and it was called… get ready… Saved by a Cat.

So, at one point in film history, there was a pair of pictures that featured a hapless detective being rescued by a pet. Obviously, a heroic cat is much rarer in cinema than a heroic dog, so this makes things doubly intriguing.

I don’t know if this picture survives or not but here’s some of the synopsis published in Moving Picture News:

“When Mr. Lewis gets back to his office he calls in the services of Detective Harper, who, after a thorough investigation, finds a clue which leads him to suspect the clerk. After close watching, he shadows the clerk to the den of the criminals. The clerk, however, is on his guard, and, knowing that he is under surveillance, encourages the detective to enter the den of the criminals.

Here, Harper is trapped. He eventually finds himself in a room closed in by automatic doors. The only outlet is a small grated window near the ceiling of the room. On the sill of this window, the detective finds a cat. Anticipating trouble. Harper scribbles a note, and ties it to the collar of the cat. Soon the cat leaves, and the window automatically closes air-tight. After a space, Harper begins struggling, desperately trying to fight off asphyxiation. Presently, he is overcome by the fumes of the gases with which the gang had filled his room.

In the meanwhile, the cat strays back to her home. Her old maid mistress sees the note around her neck, and brings the police to the rescue of the detective, who is found almost dead.”

So, in other words, pretty much an identical plot to that of The Detective’s Dog but, you know, cat. Now, I consider myself a cat person, so this film is obviously of great interest to me. Here’s hoping it has survived and we can have a cat/dog double feature soon.

I should also mention that this film does not make any mention of gratitude toward the cat, which was the case in The Detective’s Dog. Unless, of course, Harper named his daughter Kitty in a moment of premonition.

The Detective’s Dog is a deeply silly picture, but I don’t think it was really intended to be anything else. It’s a goofy little melodrama that uses a trope that was hoary in the silent era (and called out as such by critics of the time) but you’re getting exactly what it says on the tin. I had a good time and I think you probably will too.

Released on DVD and Bluray as part of Kino’s Alice Guy collection. The film is accompanied by a delightful piano score from Meg Morley.