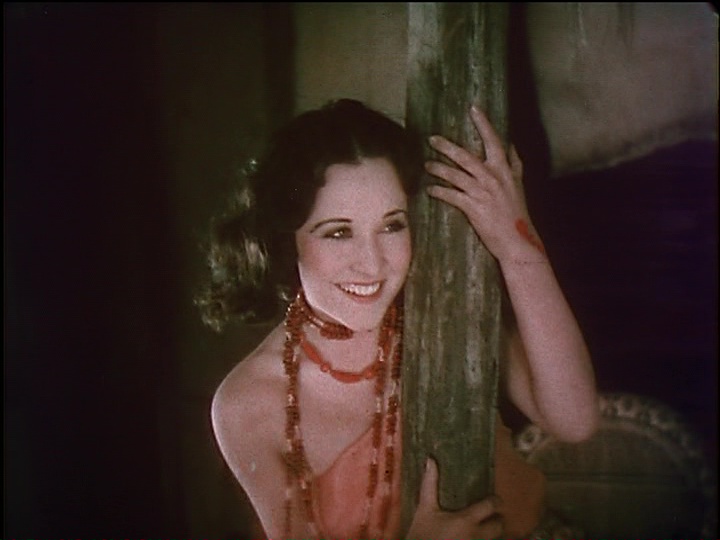 Well, it’s love and steel guitar music in this Technicolor short film designed to show off the latest and greatest in the world of natural color cinema.

Wishing for a Shipwreck

People tend to think just of talkies when the subject of movie technology of the 1920s comes up but there was so much more going on. Natural color (that is, film that captures color as the eye sees it) had been experimented with for years but with the success of The Black Pirate and the color sequences in hit films like The Ten Commandments, it looked like the process was finally catching on.

(There were actual concerns that color film would overstimulate the audience and cause eye fatigue. If that shocks you, you should read what people write about video games.)

The Technicolor company had been working to make their film less unwieldy and generally easier to work with and the budget studio Tiffany-Stahl signed on to create a series of short films that would showcase the colorful wonders of this film. At this point, color film could not yet capture the full spectrum and instead displayed a combination of reds and greens, giving the film a dreamy, watercolor effect.

The series included titles like The Cossack’s Bride, A Festival of Bagdad, Pharaoh’s Daughter and Viennese Melody (all promising colorful costumes, probably with dancing in the bargain) and had synchronized sound in addition to the color cinematography. The Love Charm was one of many silent era film based on an eroticized view of the indigenous inhabitants of South Sea islands. (See also The Idol Dancer.) In short, this was about color film AND showing ladies’ legs through grass skirts.

The plot is… Well, the less said about it the better. Basically, the idea is that a boat filled with well-heeled tourists ends up on an unnamed island. The men immediately salivate over the local women while the women on the boat are annoyed that their (checks notes) husbands and fiancés are ogling. Meanwhile, a white trader’s daughter (Ann Christy) is thrilled that there’s finally a white guy (Lucio E. Flama) for her to romance and the ship’s captain vows to return without his fiancée. Yipes.

But the main purpose of this film was to showcase the newly-upgraded Technicolor technology in a tiny, tidy package and so we’re going to look at the film from that perspective and a good thing too. Otherwise, my review would basically consist of “EW!” over and over and over again and while I would be amused, you would probably get bored pretty quickly. But let my displeasure be registered and my objection noted.

The Love Charm was a short film released with a sound-on-disc score that also included sound effects but no voices. During the talkie transition, it was common for studios to exaggerate the amount of sound in their pictures (claiming a film with just talking sequences was a full talkie, for example) and there were dueling technologies (sound on separate discs or records and sound on film).

To combat confusion, Motion Picture News had a handy legend to differentiate between sound-on-disc, sound-on-film, as well as what combination of music, sound effects, vocal music and dialogue was included in the individual film’s soundtrack. The disc with The Love Charm’s score seems to have gotten lost in the shuffle, not an unusual occurrence. (I reviewed the 1928 version of Alias Jimmy Valentine, which has also been divorced from its discs, among other titles in the same boat.)

Tiffany-Stahl went in heavily for color and continued to distribute its color shorts—dubbed the Color Symphony or Color Classic series—for quite some time after the end of the silent era. It is notable that The Love Charm was not one of the pictures that stayed in circulation. Perhaps its plot was too thin even with the novelty of color factored in. Perhaps it was because it was one of the few true silents of the lot, with most of the other titles featuring at least some vocal music or talking sequences, per Motion Picture News.

The real star of the film never appears onscreen. Cinematographer Ray Rennahan can rightly be called one of the fathers of Technicolor and his ability to capture stunning images with the famously fussy film probably saved many a motion picture. In this case, the camera captures light on the water, musicians and dancers, a fluttering American flag… nothing you could call deeply symbolic or elaborate but it’s all very pretty and I think that’s probably what everyone was aiming for in any case.

Other than the esteemed cinematographer, nobody involved in The Love Charm seems to have set Hollywood on fire. Ann Christy is probably the most famous—she was the leading lady of Speedy—but her career was over within just a few short years.

Leading man Lucio E. Flama, on the other hand, found success as a restauranteur under his real name, Niccolo de Quattrociocchi. This may come as a shock but he was Italian (I KNOW!!!) but his restaurant El Borracho apparently served French food. The restaurant reached its height of popularity under the management of Harvey Rosen but I am not sure whose idea the “Kiss Room” was. It featured an extensive collection of signed index cards bearing lipstick kisses from famous ladies of the mid-century era. Well, I suppose we can guess that Quattrociocchi as Flama was not really acting that much in The Love Charm.

In fact, Quattrociocchi proved notable enough to warrant a memoir entitled Love and Dishes, that apparently includes both memories and recipes. Obviously, it’s a must-read for me. (My copy didn’t arrive before this review was published, alas.)

So, I must conclude that The Love Charm succeeds as a showcase for Technicolor in general and the talents of Ray Rennahan in particular. And Quattrociocchi is absolutely screaming for a witty biopic but as an actor, well, he certainly did not have a high opinion of his own skills and while he is easy on the eyes, I have to concur that he is not much of a thespian. (He humorously stated that with the help of his directors, he “soon became a remarkably mediocre actor.”)

Still, the film is an interesting little curio that shows us the various technological branches of the movies in the late 1920s and how sound was not necessarily the only game on town. Plus, it’s a lost film that has been found (recovered in New Zealand, as it happens), always a welcome thing.

Released on DVD as part of the now out-of-print Lost and Found: American Treasures from the New Zealand Film Archive collection. You can watch a clip and read the Scott Simmon essay from the DVD booklet here. As the sound discs are long gone, the film has a fine new score by Michael D. Mortilla.

You can look up lots of swell clippings like these at the Media History Digital Library.