Rich kid and racecar driver Reginald Denny is late to his own wedding and that’s just the start of his problems. Well and truly dumped by Gertrude Olmstead, he heads out to California and the auto races being held there.

Reginald Denny is in a curious position. His comedies are among the most universally beloved silent films I can name off the top of my head but he remains stubbornly obscure. His style of humor is often compared to Cary Grant or William Powell; smart rom-coms with just enough frivolity to keep things fresh. In short, the sort of film that everyone seems to think was invented in the 1930s.

Perhaps Denny’s problem is that he didn’t have a distinct trademark like a square mustache, pork pie hat or glasses. One of the great myths about silent comedy is that it was all pie fights and wacky cops but Denny’s witty films relied on character-based humor and cute romances.

Whatever the reason, do give Reginald Denny a try if you haven’t already because his best pictures are pure fun and surprisingly modern.

California Straight Ahead was made at the height of Denny’s career at Universal. While many of his early pictures had been about boxing (and he continued make boxing picture intermittently throughout the silent era), his flair for comedy made him an in-demand leading man for all of our rom-com needs. And since I hate boxing and like rom-coms, this was a very fortunate change. (By the way, this film has no connection to the John Wayne film of the same title.)

This film features Denny as Tom, the scion of a wealthy family that builds racecars. Tom is quite the driver who motors the family vehicles to victory. He is engaged to marry Betty (Gertrude Olmstead), the daughter of another auto racing family. Unfortunately, Tom’s bachelor party gets out of control and he ends up in the hospital thanks to a crashed camping trailer.

Now, I think most women would accept “I was in a severe accident” as a viable excuse for missing the wedding and Betty seems pretty concerned about his safety but Tom decides to escape from the hospital and steal and ambulance in order to make it to his own wedding. Again, his fiancée seems sweet and auto accidents are pretty good reasons for cancelling just about anything. Seems to me that a simple phone call from the attending physician would have been a neater solution.

The stolen ambulance contains a woman who is being committed for psychological reasons and she decides Tom is her true love. Seeing her fiancé show up to the wedding with another woman clinging to his neck is the last straw for Betty and her family, the engagement is off. And Tom’s family is so angry about him messing up his engagement that they cut him off without a cent.

Tom ends up caravanning to California and you’ll never guess who he meets on the road. That’s right! It’s Betty. Will Tom be able to parlay this coincidence into a second chance at love? Watch California Straight Ahead to find out.

Denny could charm the fuzz off a caterpillar but California Straight Ahead shows just how far that charm can carry him. Skinner’s Dress Suit and Oh Doctor were both based on solid material, the former was based on a Saturday Evening Post story by Henry Irving Dodge and the latter on a novel by Harry Leon Wilson. Not to take anything away from Denny, he’s great in both pictures, but the quality source material was very much helping him along.

California Straight Ahead is not a story so much as a series of incidents strung together with a protagonist who is, on paper, pretty unsympathetic and not extremely bright. I mean, everything that goes wrong at the beginning is 100% his fault and he doesn’t really seem to learn and grow from the experience. In short, Denny starts with a handicap.

The fact that we continue to enjoy the film and root for his character shows that his charisma is not rooted in the best material. This is third-rate stuff at best but Denny makes it much more than the sum of his parts. (I won’t name names lest I start a fire in the comments but there are some famous actors who go to pieces if the material isn’t there to prop them up.)

The other impressive element in the picture is Gertrude Olmstead. At this point in her career, Olmstead was recovering from being one of the many, many, many people fired from Ben-Hur. She had been cast as the love interest for George Walsh but both she and Walsh were sacked when the embryonic MGM took over the production and found utter chaos. I had seen her in The Monster and The Boob and found her to be meh as an actress so I was not particularly excited to see her name in the credits.

Well, the joke was on me because Olmstead is great in this picture. She peppy and animated and exactly what I like to see in a rom-com heroine. Her character has sass and spirit and doesn’t let Denny off the hook for his irresponsible behavior.

The main flaw in the picture is (hold onto your guts and garters) Tom’s valet, who is named… Sambo. And played by a white actor in blackface, in fact, blackface was actor Tom Wilson’s specialty and yes, he appeared in The Birth of a Nation. And the icing on the cake (sarcasm) is that Sambo’s introductory title card references chicken. Yeah… 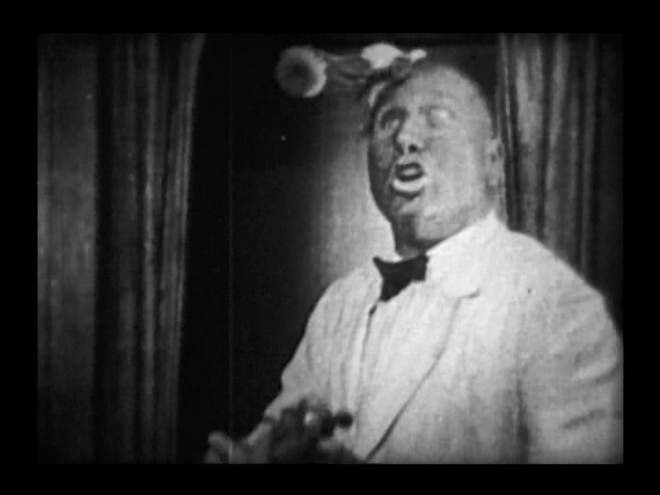 There are still occasional flare-ups of the old “we need to look at context, nobody was offended back then!” myth so keep the story of the Ebony film studio in mind. It was a white-owned comedy concern that featured black players and a boycott spearheaded by African-American writers and moviegoers brought it down in the late-1910s. In short, people did notice, were offended and did demand (and sometimes succeed in getting) changes when films used racial or ethnic stereotypes. In any case, when discussing racism, it’s important to listen to the people who were targeted by that racism. If you want to find out how much a broken leg hurts, you ask the guy in the cast not the one dancing a jig.

The auto race scene at the finale shows the usual stunt prowess silent film fans have come to expect. Universal plugged the sequence in its marketing, making sure audiences knew that Denny must overcome his car catching fire to emerge victorious. The escaped circus animal sequence, frankly, goes on for a bit too long and becomes tedious. I would much rather have had more moments of Denny and Olmstead being cute together, frankly. The scene where Denny wins Olmstead over with carefully selected phonograph records, a chicken dinner and an open window is as adorable as can be.

However, director and screenwriter Harry A. Pollard has plenty of flourishes and tricks including nifty animated title cards and slick camera tricks courtesy of cinematographer Gilbert Warrenton. (Warrenton later worked on Lonesome, The Cat and the Canary and The Man Who Laughs.)

California Straight Ahead pretty much succeeds on the shoulders of its leading players. While not as character driven as Denny’s other comedies of the period, it does provide him with plenty of chances to show off his charm and Gertrude Olmstead matches him in appeal. Alas, the Sambo character does rather interfere with our total enjoyment of the picture.