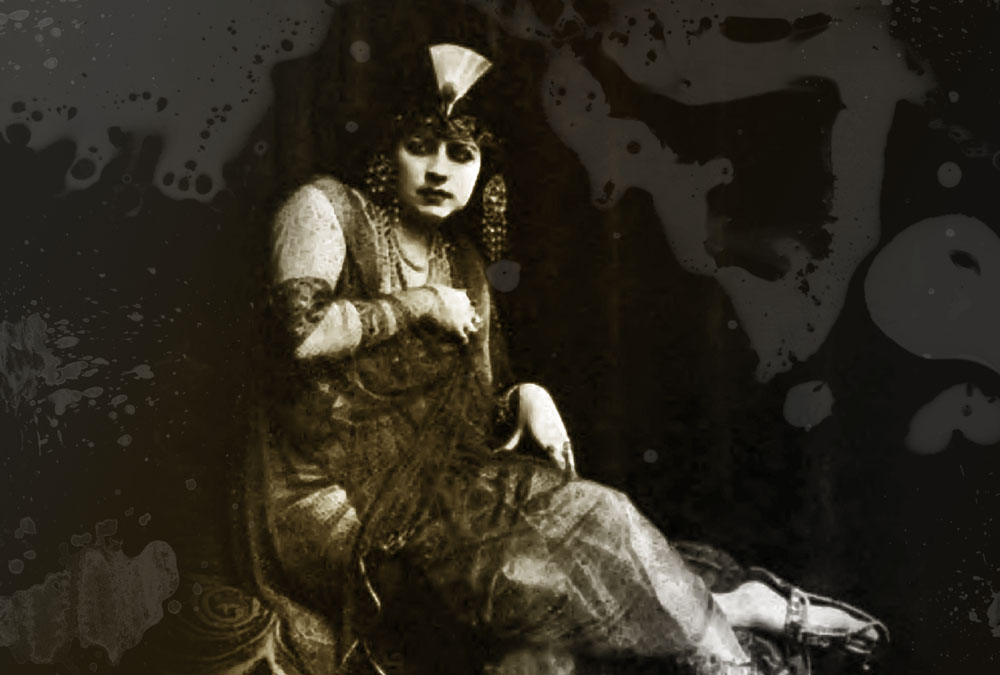 The queen of Egypt loves her Romans and so she falls for Mark Antony… What? You mean you know this one? Well, anyway, we’re looking over one of the very first feature-length Cleos with Helen Gardner in the title role.

A quick note before getting started. This 1912 release will be invariably compared to the more famous 1917 version starring Theda Bara. That Cleopatra is long lost and is one of the most wanted silent films in the world. As a result, unscrupulous people have tried passing off the Helen Gardner Cleopatra as the lost Bara vehicle. This is obviously quite irritating but the target of our irritation should be the scam artists, not this film.

Before she made Cleopatra, Helen Gardner was a major star at a major studio with a major hit under her belt. Vitagraph’s Vanity Fair (1911) earned praise from film critics and Gardner’s performance was particularly singled out. In 1912, Gardner became one of the first stars to take advantage of her own popularity and launch a production company, a move that would later be taken by Gene Gauntier and Mary Pickford.

If every actor dreams of playing Hamlet, Cleopatra is the classic role that actresses long for. There’s romance, tragedy, poisoning and a great death scene, plus audiences can be lured in with promises of lavish sets and costumes. Egypt was a hot commodity in the west in the first part of the twentieth century, so the selection of topic would have been a no-brainer.

Anyone making a Cleopatra film has the option of either going directly to the historical record or filtering them through popular stage properties, often Shakespeare. Gardner opted to adapt the 1890 Shakespeare-derived play by Victorien Sardou and Émile Moreau that had served Sarah Bernhardt so well.

As the film opens, we are greeted with this title card asking for our indulgence as the adaptation is loose and not enslaved to history. 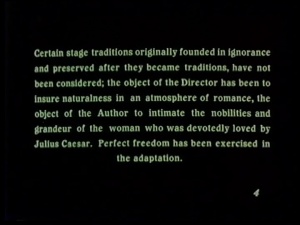 You know what? I’ll take it! The honesty is refreshing, especially in today’s spoiler-averse world. Considering that some modern filmmakers lie outrageously and badly just to preserve stupid twists that everybody has guessed anyway, Cleopatra’s title is a breath of century-old fresh air. These Hollywood whippersnappers could learn a thing or two.

When the film opens, Julius Caesar is already dead and Mark Antony (Charles Sindelar) has vowed to drag Cleopatra back to Rome in chains. It’s a suspenseful moment in history: will the Egyptian queen be conquered by Rome or will she pull some trick out of her gem-encrusted bustier?

Well, I’m sorry but you have to wait. It seems that a slave named Pharon has a crush on his queen and she promises him that he can love her for ten days if he kills himself at the end of them. Pharon leaps at the chance, proving that he is quite a disturbed and disturbing young man. However, another slave has a crush on him and saves his life, telling him that Cleopatra changed her mind.

(An 1891 magazine article notes that the addition of the Pharon character was based on Théophile Gautier’s Une nuit de Cléopâtre, which tells the tale of a slave who loves the queen and exchanges one night of love for drinking a cup of poison. However, Gautier’s tale was meant as a vignette with the slave’s death used to illustrate the empty cruelty of Cleopatra and Pharon in the film just kind of… stays.)

Anyway, Mark Antony shows up, falls for Cleo (he’d have to or we’d have a very short movie) but then marries Octavia, the sister of his political rival Octavius. Octavia is the only sane character in the film and tries to make peace between her husband and brother but Cleopatra pushes Antony to war with Octavius.

Of course, we all know that our main romantic characters are doomed and it’s no spoiler to say that the film ends with a double suicide. The main question is how Helen Gardner handles herself as Cleo.

All told, pretty well. Like the rest of the cast, Gardner’s performance is on the stylized, stagey side but that would have been an artistic decision. (Silent film actors were generally adept at multiple flavors of acting, from heaving melodrama to delicate subtlety.) Gardner does command the viewer’s attention when she is on the screen, which is an important skill considering that the camera keeps a safe distance throughout the picture.

Her take on the character is Cleopatra the Enchantress, wielding an almost supernatural hold over the men who love her. The term “vamp” is thought to have been coined in 1911 and while we are a few years away from the debut of Theda Bara, Gardner’s performance clearly captures a notion that was in the air during the film’s production.

The direction by Charles Gaskill is staid and owes much to the stage but it clearly also seeks to mimic the Italian epics that were so popular at the time. Alas, Gaskill’s talent lacks both the depth of field and eye for striking imagery that marked the best Italian films of this period and which would have elevated his production.

The direction is more on par with the 1909 Vitagraph version of A Midsummer Night’s Dream, which would make sense as both Gardner and Gaskill were veterans of that studio. I would peg it as being on the old-fashioned side of modern. I should also note that direction was all over the place for much of the silent era, with extremely modern films existing alongside extremely traditional ones.

(Gardner and Gaskill are sometimes listed as a married couple but Gardner’s granddaughter denies this and, really, she ought to know.)

In addition to her other duties, Gardner is credited for designing her own costumes. Of the three major Cleopatra features in the silent/pre-Code era (Bara’s and Cecil B. DeMille’s 1934 super-production), this was the only time that the queen’s appearance was completely under the control of a woman. Gardner’s costumes are more in your classic queenly raiment variety, as opposed to snake-encrusted pasties. The fabric is sumptuous and there’s a lot of it, which is actually quite refreshing. For period comparison, check out Blanche Sweet’s “nothing comes between me and my Calvins” shift in Judith of Bethulia (1914).

It’s obvious that Gardner meant to look pretty on the screen but she wasn’t about to let her costumes do the work for her.

(That’s not to say that the other Cleos were helpless to their designer’s whims. Claudette Colbert infamously crossed swords with Travis Banton over the look of her character. Some of the more melodramatic versions of the tale even claim that blood was spilled. Nevertheless, the look of Cleopatra was filtered through a man’s creative vision.)

This is certainly the most readily available work of Helen Gardner, one of a handful extant works in which she was the credited producer. Her lost films (some as actress and producer, some just as actress) have tantalizing titles like Miss Jekyll and Madame Hyde, The Vampire of the Desert and She Came, She Saw, She Conquered. I’d buy tickets to any one of them!

(Her big 1911 Vitagraph hit, Vanity Fair, does exist and is available on DVD, so I will have to take a closer look at it in the near future.)

If I had to put my finger on one issue with this Cleopatra, it would be that the screenplay lacks focus. I realize that much of this is famous history but the film should still have done more to establish things like the rivalry between Mark Antony and Octavius and the state of Cleopatra’s political power in Egypt.

But noooooo, we need more Pharon scenes, apparently. I understand deciding to focus solely on Antony and Cleopatra’s romance but why introduce an entirely new lover when we could have been seeing (looks at notes) one “Julius Caesar” in this film? Well, as it turns out, the whole point of Pharon is that he delivers the asp to Cleopatra during the film’s grand finale.

I don’t know about you, but I don’t give a continental about Cleo’s snake supplier. In terms of the drama, it doesn’t matter. This reminds me of today’s prequel craze and the need to explain how James Bond started drinking martinis and how Oz’s early love life went. I mean, seriously? This is our payoff for all those interminable Pharon scenes? I protest!

(In all fairness, Pharon was a key figure in Sardou and Moreau’s play but as this was billed as a loose adaptation, I would have expected him to be excised.)

Helen Gardner’s Cleopatra is certainly a product of its time and it would be unfair to hold that fact against it. It is an impressively ambitious production made at the time when feature films were just starting to gain momentum in the American film industry. While it definitely needs to be viewed in the context of other historical films of the period, it does have great entertainment value to a sympathetic viewer.

However, the adaptation is all over the place and the inexplicable decision to feature Pharon as the second male lead spoils much of the film’s appeal. Nevertheless, this is an important piece of film history and living evidence of the power of women in the movie industry.

Cleopatra is available on DVD from Grapevine.