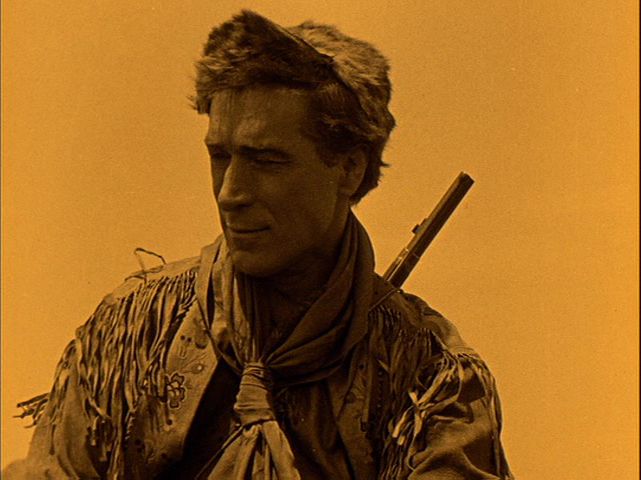 William S. Hart is a Santa Fe Trail guide whose brother is murdered by a riverboat gambler. And guess who has joined the wagon train Hart is directing to Santa Fe? Less action and more drama in this Hart vehicle with veteran baddie Robert McKim providing the mustache twirls.

I always get a little giggly when I read film historians confidently assert that Stagecoach was the first “adult” western, what with its themes of revenge, hypocrisy, redemption and so forth. I believe Mr. William S. Hart would have liked a word on that topic as he was playing in that particular sandbox a quarter-century before Stagecoach was shot.

I’ve reviewed a fair number of Hart films already and have seen just about everything of his that has been released on home video, as well as a few titles that are as yet unavailable. Wagon Tracks is from a point in Hart’s career when he was swinging between his old, dark, bloody westerns and infusing some more emotional drama into his pictures. The film is definitely more on the emotional side of things, so we’re going to see how that works out for Hart.

Little brothers returning home never seem to fare well in these movies, do they? To further cover himself, Washburn tells everyone that Billy attacked Jane and she killed him to defend her honor. When Buckskin hears of this, he is immediately suspicious. Billy was a good kid and Jane doesn’t seem to be particularly enthusiastic about the story.

And wouldn’t you know it, the Washburns and Merton are part of the wagon train Buckskin is leading to Santa Fe. I imagine that the trip will be completely free from incident and bloodshed.

Hart’s westerns all have a distinct style and I’ve covered my share of them already but for those of you who are new to his pictures, here’s a brief breakdown. Hart’s films were simultaneously ahead of their time and hopelessly old-fashioned. He like grim, dark characters, bloody revenge and, often, the saving or damning of souls. It’s all very spaghetti western at times but Hart could also be sentimental and he never met a florid title card he didn’t like.

As a result, Hart is one of those love/hate stars. I am strongly in the love camp, as you might have guessed. Despite his eccentricities, or perhaps because of them, Hart created some of the best westerns of the silent era. Heck, of any era. His patented combination of brutality and sentimentality likely had its roots in his 19th century upbringing (he was born in 1864) but everything old is new again and his intensity plays very well to modern audiences. “He’s an unstoppable killer but he’s one of the good guys… I think…”

Hart’s work is widely available on home video but his appeal is often misunderstood and mischaracterized. Just as Mary Pickford is sometimes described as a saccharine child impersonator, Hart has been described as an austere, white-hatted figure. In her biography of Buster Keaton, Marion Meade even claimed that Hart always played Dudley DoRight (sic) characters, which neatly illustrates that she knows as little of Hart as she does of Keaton. (I debunk a whole mess of myths regarding the Hart/Keaton connection here.)

All I can say is this: give Mr. Hart a try for yourself. Wagon Tracks is a bit moodier and more of a drama set in the west than an actual western. If that sounds good to you, give this one a shot. If not, I highly recommend Hell’s Hinges or The Toll Gate, two of Hart’s darkest films and two of his best.

I personally am not a big fan of Hart getting all soppy on us. While his performance is generally good, there’s a bit too much tearful gazing at the sky for my taste. A stage veteran, Hart did sometimes play to the cheap seats and that is definitely the case here. Like I said, it’s not terrible but one wishes that someone had been able to rein him in.

Once Buckskin figures out that Jane is not the killer, the movie kind of goes off the rails. (Spoilers ahoy for this paragraph.) Buckskin takes Washburn and Merton out into the desert and forces them to march without water until one of them confesses to the murder. All well and good but in doing this, Buckskin abandons the wagon train he had been hired to guide. In his absence, a party of Kiowas show up. The settlers have no experience with Native American culture and a Kiowa man ends up getting shot after a misunderstanding. Gee, if only there had been a helper on hand to assist in cross-cultural communication, a guide. Remind me NOT to hire Buckskin Hamilton if ever I need to travel on the Santa Fe Trail.

Robert McKim is probably best remembered today as the villain in The Mark of Zorro and he does his usual good job as the oily Washburn. Unfortunately, his effectiveness is undone by a narrative contrivance that, frankly, is just plain silly. (Spoiler: Buckskin leaves Washburn with a pistol so that he will do himself in. I know this is astonishing but our sneaky villain uses it to escape instead. Who could have imagined?)

Jane Novak is fine as the heroine, though she is given little to do besides weep. Her career is sometimes listed as a victim of sound but that’s a silly oversimplification. If you take a close look at the films she made from 1926 to 1929, you will see that she was no longer receiving top billing at major studios. Instead, she was playing leads in poverty row productions and secondary roles in studio fare. The answer is obvious: her career was on the rocks before Al Jolson ever sang a note onscreen. When investigating these things, it is important to look at the quantity AND quality of parts being played in the years leading up to the sound transition.

Reviews of the film published in 1919 were mixed. Some complained that the film did not focus enough on romance and others did not like the idea that Jane would help Buckskin discover the truth about her brother. She was supposed to shoulder the blame for murder and let her brother get away clean, apparently. However, critics did admire the scenery and rightly so.

The film was shot around Victorville, California, my old stomping grounds. (Here’s another cowboy connection. The area was the longtime home of the Roy Rogers Museum before it moved to Missouri and subsequently closed. Roy would be around to greet visitors on occasion but I was too shy to say hello.) The scenery is dramatic with creosote bushes and Joshua trees dotting the landscape. (Are there creosote bushes and Joshua trees along the real Santa Fe Trail? Let me know!) By the way, creosote bushes are not much to look at but they smell like a slightly piney rainstorm. Divine!

Lambert Hillyer, one of Hart’s go-to directors, and cinematographer Joseph H. August make the most of the harshly beautiful landscape and create one of Hart’s most visually striking films. In addition to the desert scenery, they use firelight, shadows and moonlight to create a look that could almost be called western noir but we’re a bit early for that. August went on to work as cinematographer on classics like Gunga Din and the 1939 Hunchback of Notre Dame, while Hillyer directed Dracula’s Daughter and the 1943 Batman serial. (Hillyer and August worked together twice in the 1930s but, alas, not on anything that could be called gothic or horror.) Take a gander at their Wagon Tracks work: 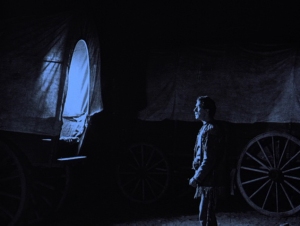 In fact, the look of Wagon Tracks is enough for the viewer to forgive many a sin of hammy acting or purple prose. Hart is great when he’s glowering but the illogical screenplay and his own tendency to over-emote dampen his effectiveness. How much you will enjoy the film depends on exactly how much of this you are ready to tolerate.

Wagon Tracks is a generally fine, tense drama that makes the most of its western setting, it’s just a shame that the script did not undergo a couple more revisions. While well-made, it doesn’t quite live up to the glory of Hart’s best films.

Olive Films has released Wagon Tracks on DVD and Bluray. Yes, there are other editions around but you MUST get the Olive release for maximum viewing pleasure. That thing is gorgeous! The film is accompanied by a fine piano score by Andrew Earle Simpson.