Ben Turpin plays a would be lothario who goes about harassing and annoying every woman he can find. The women each inflict their own form of revenge on this horrible pest, from scissors in the backside to electrocution to a pie in the face. Ah, innocent times!

This is my contribution to the Great Villain Blogathon hosted by Silver Screenings, shadowsandsatin and Speakeasy. Be sure to read the other posts!

Ben Turpin may not be as big a name as Charlie Chaplin or Harold Lloyd but he remained a perennial slapstick favorite during his three-decade-plus career. Noted for his crossed eyes (no, he wasn’t born that way), Turpin got his start at Chicago’s Essanay film company.

Mr. Flip was an early hit for Turpin, he had only been making movies for about two years, and it also cast him as a villainous character that is all too familiar to many women. Not all baddies wear black capes or try to take over the universe and In the case of Mr. Flip, Turpin plays a serial harasser of women in the workplace. However, every single time he oversteps his bounds, the women come up with unique punishments to inflict upon him.

Mr. Flip starts in a haberdashery, where he tries to fondle the clerk’s face. She has him wheeled out in a dolly. Next, he attempts to harass a manicurist but her co-worker stabs him in the backside with a pair of nail scissors. A telephone operator tires of his groping and electrocutes him a little; a barber and her assistant fill his mouth with shaving cream and what looks like astringent; a bartender and her patrons squirt him with seltzer bottles; and, finally, the clerk at a bakery smashes a pie into his face and pelts him with rolls.

In this case, “flip” means impertinent and Turpin’s character certainly lives up to that description, as you can ascertain from the description of the plot. As stated before, this sort of thing will be familiar to most anyone who has worked with the public and women in particular. Worked in retail, food service, reception or the like? You probably have enough stories of would be Casanovas to fill a book. And that is why Mr. Flip is so supremely satisfying.

Is it repetitive? A little but it’s fun to see the counterattacks devised by the women and their quick thinking leads one to believe that Mr. Flips come through their doors fairly often. Heck, there are still people who think that normal humans actually go for this kind of thing. (Speaking for myself, I actually like shy.)

While men do take part in Mr. Flip’s punishment twice in the film, they are never framed as the savior defending the honor of a damsel. The young man who wheels out Mr. Flip on a dolly is clearly the subordinate of the woman working the counter and the bar patron who squirts seltzer is just joining the fray. These women know how to take care of themselves.

It’s highly unlikely that this film was intended to be specifically empowering to women but is accomplishes it all the same. Further, it shows women working in various fields and being, apparently, very good at their jobs when they don’t have to deal with horrible customers like Mr. Flip.

Mr. Flip is sometimes credited (either overtly or by omitting all earlier titles) with containing the first pie-in-the-face gag. Not even close. Family Troubles (1900) features a probable pie to the face and the 1905 comedy The Coal Strike contains a confirmed pieing. The joke had been a popular one on the stage for quite some time as pies were easy enough to mock up as props with shaving cream and the like, it would have been a no-brainer for comedians to make use of them.

Again, just because something is old does not make it the first. I’m not even claiming that Family Troubles or The Coal Strike had the first pie-in-the-face, just that I think we have muddied the waters enough to look at Mr. Flip’s claim with suspicion. (And, I would like to point out, this information was ridiculously easy to find. All I did was search for “pie” in online film catalogs; I’m just a blogger with an internet connection. The cited articles are from paid journalists working for reasonably large publications and historians published by major presses. You had one job, guys.)

By the way, Family Troubles and The Coal Strike survive in the paper print collection at the Library of Congress. Plot synopses from the LoC here with pertinent bits highlighted: 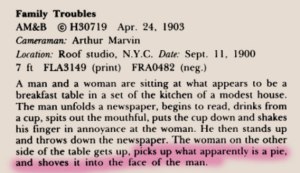 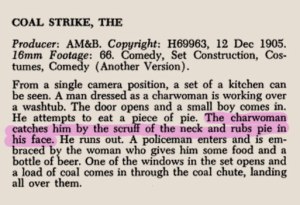 (I would love to talk about paper prints but then we would be here all day and I really need to get back to the movie.)

I suppose this is also as good a time as any to bring out that pies were not nearly as common in silent comedy as you may have been led to believe. Slapstick comedy also made use of (off the top of my head) milk, flour, tar, mud, molasses, honey, coal, dirt, glue, paint, gasoline and more. If it could be thrown, squirted or fallen into, it probably appeared in a silent comedy. I should note, though, that neither Mr. Flip, Family Troubles nor The Coal Strike throw their pies but rather smear them.

The version of Mr. Flip that is most readily available is missing the final two harassment sequences but, frankly, this is for the best. (At least according to the synopsis found in Moving Picture World.) Turpin’s character tries to arrange an assignation with an actress but she has her African-American maid wear a veil and go in her stead. Turpin’s “punishment” is discovering that the object of his affection is not white. 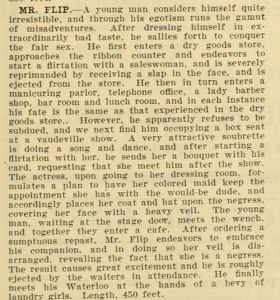 (The “omigod, I almost had an interracial flirtation” gag was reused by Roscoe “Fatty” Arbuckle and Buster Keaton, among others. I write about the vocal objections to this sort of humor, particularly by black citizens of Chicago, in my review of Two Knights of Vaudeville. For more information on the reactions of contemporary African-American viewers to racial comedy, I highly recommend Migrating to the Movies by Jacqueline Najuma Stewart.)

The film originally ended with Mr. Flip receiving his final comeuppance at the hands of laundry workers. As it stands, the picture is more of a loosely connected set of vignettes without much closure. The direction, especially compared to the visual sophistication of other 1909 entertainments like Princess Nicotine, is rudimentary at best.

Contrary to popular opinion, closeups were being employed for dramatic effect at this point in cinema history (no, the technique was not invented in The Lonedale Operator) but Mr. Flip is what I like to call a “show me their toes” movie. It really looks more like something from 1900 or 1905 than 1909. That being said, Turpin and his costars do their best to keep things lively and they almost make up for the staid camera work. Almost.

Mr. Flip is a slapstick comedy that, intentionally or not, speaks to a female audience. While it’s not really the first anything and the most available version is incomplete, the present product is an enjoyable bit of slapstick with a recognizable villain. Worth a look for fans of classic comedy.

Mr. Flip was released on DVD as part of the Slapstick Encyclopedia with Photoplayer accompaniment by Robert Israel.