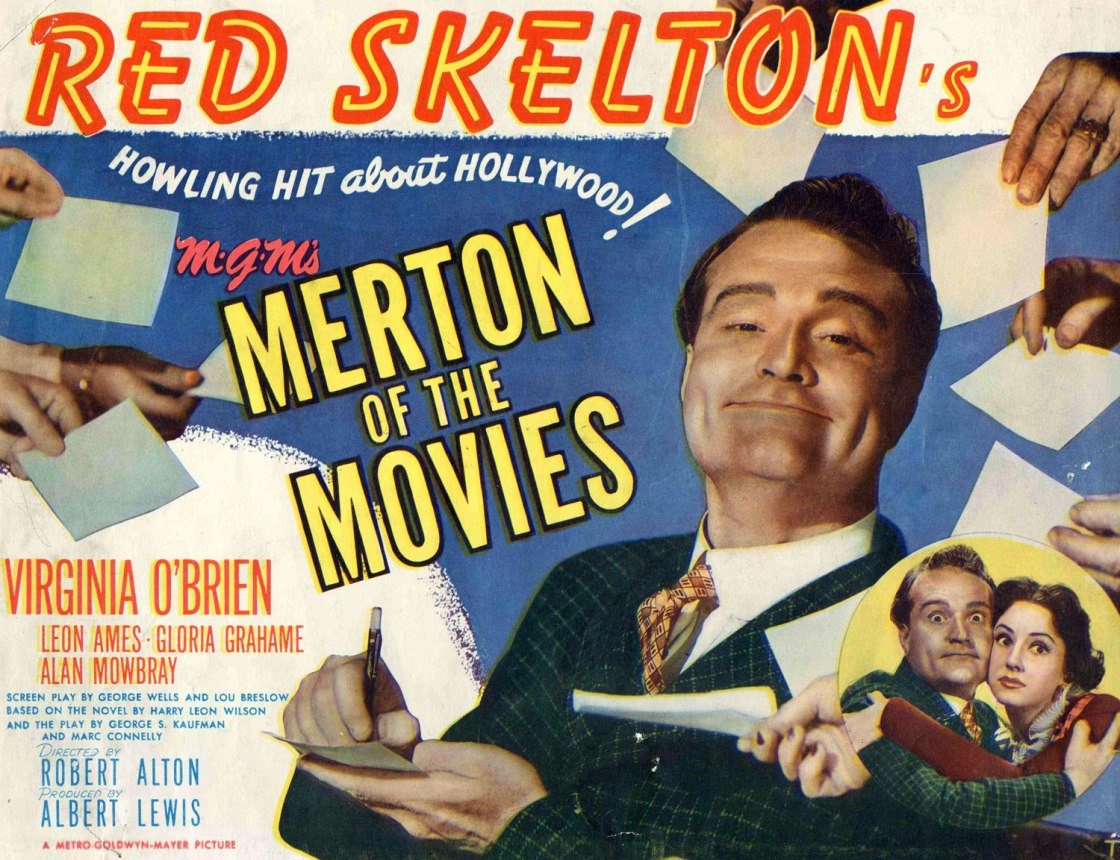 Silents in Talkies: Merton of the Movies (1947)

Welcome to another installment of Silents in Talkies. In this series, I review sound movies that are either about the silent era or that incorporate silent films into their story. I will review the film itself and then briefly discuss whether the film helped or harmed public perception of the silent era. This time, we’ll be looking at a movie that is both a remake of a silent movie and has its story set in the silent era: Merton of the Movies.

Merton of the Movies by Harry Leon Wilson is one of my favorite light books. It tells the tale of Merton Gill, a young shopkeeper’s assistant who dreams of stardom in artistic romance and thundering westerns. None that coarse comedy stuff for him, nosirree! He goes to Hollywood, is befriended by a stuntwoman and comedienne named Flips and soon learns that making it in the movies is hard. His main problem: he is a terrible actor!

Flips plays a joke on Merton by telling him that he is starring in a drama but it’s really one of those knockabout comedies he loathes so much. Merton’s terrible acting is comedy gold and he becomes a star. He has a breakdown when he discovers that he has been tricked by everyone he trusted and that his dreams of dramatic stardom are dead but learns to accept his fate. (You can read a public domain copy here.)

It’s a bittersweet little tale and was successfully adapted for the stage and then the screen. Glenn Hunter was Merton in the lost 1924 version and the 1932 sound remake entitled Make Me a Star featured Stuart Erwin in the role. (You can read my review of the film here.) By 1947, it seemed time to remake Merton once again as a vehicle for Red Skelton, then the hot comedy property in Hollywood. While Make Me a Star moved the Merton story into the talkies, the filmmakers in 1947 opted to go back in time to the silent era.

The film opens about as badly as possible. We are shown the then-modern Hollywood and then flash back to 1915. We are informed that the movies were in their infancy and, like all infants, they could not talk. The acting! The makeup! (Um, the 1940s has no room to talk about makeup.) Clips of vintage films are shown at hyperspeed with goofy music. Weren’t silent movies a scream?

Yeah, you can imagine how well that went over with me.

Merton (Red Skelton) is a theater usher who gets a little too excited by the movies, actually attacking patrons if the movie is suspenseful enough. These random bursts of violence come in handy when the theater is robbed and Merton accidentally thwarts the bandits. Movie star Lawrence Rupert (Leon Ames) has Merton brought to Hollywood as a publicity stunt but our hero thinks he’s going to be made into a star.

Naturally, we get a montage of rejection but Merton’s fortunes turn around when he meets Phyllis (Virginia O’Brien), an actress and stuntwoman. She takes a liking to Merton and lets him watch her double for his idol, Beulah Baxter (Gloria Grahame). Later, Phyllis realizes that Merton’s attempts at dramatic acting are hilarious and so she arranges for him to be cast in a new comedy…

Red Skelton is very much a love-him-or-hate-him performer. He leaves me pretty cold but I have a certain amount of affection for him because my father loves him so. Still, I never really seek out his pictures and he certainly isn’t on my top ten comedian list.

Regardless of how funny he is, Skelton is horribly miscast as Merton Gill. The character’s naivete and start-struck behavior is understandable in a young man but ridiculous in performer of more mature age. Glenn Hunter was twenty when he starred as Merton in 1924, Stuart Erwin was twenty-nine when he played the character in Make Me a Star (1932), which was pushing it. Skelton was thirty-four in 1947, nearly two decades too old to be a believable theater usher. His Merton comes off as less naïve and more delusional and one wonders why no one turned him in for psychiatric evaluation.

This has the side effect of removing Merton’s humanity. For any adaptation of the story to succeed, we need to understand and feel sorry for the pretentious young man who dreams of making art. Hunter’s Merton is a lost film but Erwin’s survives. Both actor and director William Beaudine show great sensitivity toward the character. He may have ridiculous notions but he is always given a shred of dignity and more than enough sympathy. With Skelton’s Merton, we’re just supposed to throw our heads back and laugh at the rube.

(Spoilers) Further, Skelton lacks the dramatic chops to stick the landing. The last reel of Merton of the Movies needs to be bittersweet for the movie to succeed and Skelton seems incapable of playing these scenes. He discovers the deception at the film’s premiere but immediately forgives all and is 100% smiles as the film plays. The screenplay tries to compensate by having Rupert Lawrence send goons after Merton but this falls flat. A few cartoonish goons are no match for a broken spirit.

The rest of the cast is either overdone or nondescript. I just rewatched the film for this review (the things I do for my readers) and I cannot recall a single standout. Well, a single positive standout anyway. However, Gloria Grahame’s airhead mean girl character is one of several elements that are similar to Singin’ in the Rain. Considering director Robert Alton’s association with Gene Kelly, one wonders…

Fun Tangent: The IMDB trivia section claims that Virginia O’Brien did all her own stunts in this picture. You will recall that a major plot point of the film is Merton discovering that his idol was actually doubled by Phyllis while claiming to do all her own stunts. Well, I hate to burst the bubble of Virginia O’Brien fans but unless the lady managed to gain and lose 35 lbs. in mid-air, I am calling shenanigans. So an actress playing a stuntwoman who had to perform stunts for an actress who claimed to never use a double, claimed SHE never used a double but totally did. An ouroboros if I’ve ever seen one! (I wonder who her double was and if he was doubled. Yes, it’s pretty clearly a he.)

One more thing: the picture ruthlessly cuts down the original Merton story but finds time for an interminable scene in which our hero gets into trouble in a club for retirees. The thing goes on forever and there is not a laugh in sight. I have heard people defend the jokes in Merton because Buster Keaton was hired as a gagman for the picture but I remain unmoved. I don’t care if the gags were written by Keaton, Chaplin, Lloyd, the Marx Brothers, Dorothy Parker, Mark Twain and the entire Hal Roach comedy team, they’re still not funny. (Keaton would go on to play Merton on stage in a revival production. Now THAT would be something to see.)

Pass! Merton of the Movies is a waste of celluloid and I would happily volunteer to take a match to the last copy. It spectacularly misses the point of its source novel and displays the insufferable smugness that marred many a picture during the so-called Golden Age. It is relentlessness unfunny and is unpleasant and unkind to boot. The score is Mickey Moused within an inch of its life and the direction is dull. Unless you are a diehard Red Skelton fan, stay far, far away and watch Make Me a Star instead.

Did this film harm the silent era’s reputation, help it, or is it a draw? Well, as you can probably guess, I am dubbing this a harmful feature. (By the way, I am not interested in nitpicking tiny technical or historical details. This is about the overall film and how it makes people feel about silent movies in general.)

Merton of the Movies is a prime example of the scorn heaped on the silent era by Golden Age films. This isn’t a matter of small historical details or picayune complaints, it’s the overall tone and feel of the picture. From the very start of the film, sardonic narration tells us that the silent cinema is something to be laughed at and mocked.

Further, the movie falls into all the usual mistakes that happen when people who know nothing about silent movies make silent movies. The action is sped up to ridiculousness, obnoxious sound effects are added, the title cards are wordy and consciously old-fashioned and there are far too many of them. (Remember, silent era audiences could read lips and title cards were seen as interfering with the flow of a picture. Many filmmakers tried to have as few as possible.)

But, as stated above, the attitude of the film is really the worst part. This notion that silent movies are creaky and primitive and impossible to take seriously is still present in much of the moviegoing population. Films like Merton of the Movies helped spread this perception and devotees of silent cinema are left with the Sisyphean task of fighting these misconceptions. Just when we think we’ve made some headway, some dodo will watch Merton of the Movies or Singin’ in the Rain, take it as gospel and send us back to square one.

Yeah, I’m bitter. Yeah, I’m taking it out on this film. Is it fair? Maybe not but hammering on Merton of the Movies made me feel a whole lot better.

Availability: Merton of the Movies was released on DVD as a double feature with Make Me a Star. I’ve said this several times but I will repeat once more: Do yourself a favor, watch Make Me a Star twice and skip this clunker.