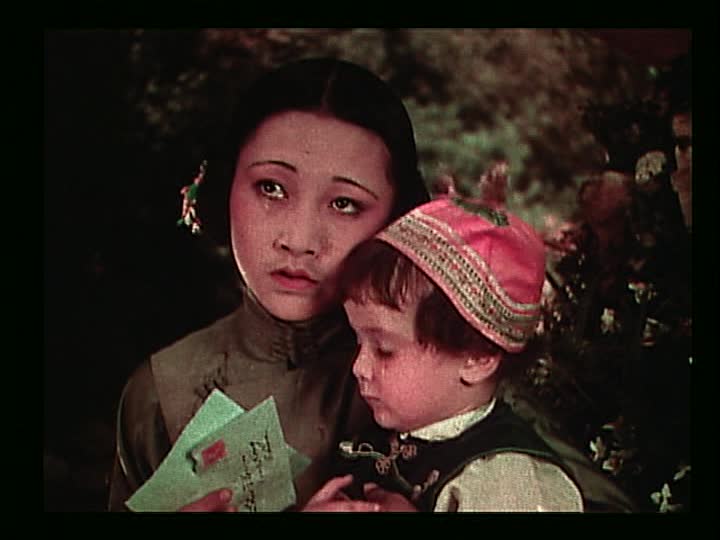 A teenage Anna May Wong (in Technicolor!) is minding her own business in China when some dope washes up on the shore, induces her into a mock marriage, impregnates and abandons her. He is the good guy. Drippy riff on Madame Butterfly wastes Miss Wong.

Anna May Wong was one of the most beautiful and talented women ever to grace the screen, even if Hollywood chose to ignore this fact. Often trapped in roles filled with racist tropes, Wong did what she could and managed, more often than not, to emerge with the best performance in the film.

Made when Wong was still a teenager, The Toll of the Sea is a perfect example of her movie problem: she was expected to add an exotic presence to a picture and then suffer for the camera.

No complete copies of the film exist and the ending had to be replaced with shots of the ocean on a vintage Technicolor camera and some carefully selected title cards. However, the story is complete and easy to follow. Unfortunately. Look, I know this film has fans but I may as well tell you now that I hated it. Hated. It.

(Yes, it’s just terrible that I would hold this opinion. Yes, we should look at context. Like the historical abuse of Chinese immigrants in California, the same prejudices that dampened Anna May Wong’s career. Oh, that’s not the context you meant? Picky picky.)

Lotus Flower (Anna May Wong) is a young woman living on the coast of China. One day, she helps save an American man (Kenneth Harlan) from drowning. His name is Allen Carver and Lotus Flower thinks he is a dreamboat. She promises the sea to pay whatever it likes if it will give his love to her.

In a plot development that has more to do with Allen being a cad than anything else, he begins to pursue Lotus Flower and marries her. However, the gossipy village women warn Lotus Flower that American men will not respect a Chinese marriage. He will leave her and never return. Lotus Flower refuses to believe them.

Meanwhile, Allen’s friends encourage him to abandon Lotus Flower and he boldly stands up for the woman he loves. Oh wait, no he doesn’t, he totally throws his wife under the bus. Poor little Lotus Flower is waiting to be taken to America. She has put on a western-style traveling outfit, one that is decades out of date. Allen was wavering but that outfit seals the deal. A Chinese wife? Maybe. But one who doesn’t keep up with the latest fashions of an alien culture on the other side of the globe? Heavens to Murgatroyd!

I’m not even kidding. The dress seals her fate. I can’t even. I ran out of evens twenty minutes ago. And lest you think this scene was meant to sympathize with Lotus Flower, take a gander at these mocking title cards: 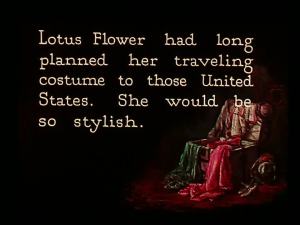 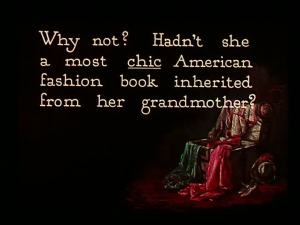 Hey, Allen, how about taking your wife shopping, buying her something pretty and tutoring her on American culture. It’s a long boat ride back to the States, after all. Oh yeah, that would be too much like human. Stinking sociopath. (I don’t like him.)

If there is an upshot, Anna May Wong plays the scene beautifully, every feature speaks of her heartbreak. It’s yet another scene that proves Wong’s infinite superiority over her co-stars. It’s not just that Allen is an unlikable character, Kenneth Harlan pretty much mails in his performance from the dark side of the moon. For a vanilla character, this would be annoying. In the case of this film, where the entire plot depends on Allen being appealing enough to break Lotus Flower’s heart, it is unforgivable.

Frances Marion is so enamored of her central theme of “the sea giveth and the sea taketh” that she sort of whacks it into the story where it doesn’t really fit. Lotus Flower’s problem is not a supernatural pact with sea spirits. Her problem is that Allen is a jackass. (Kenneth Harlan was similarly insufferable in The Penalty. I am sensing a pattern.)

Back in America, Allen takes up with his old flame, Barbara (Beatrice Bentley), and it is clear that wedding bells will be ringing for him once again. For a dullard like Allen to win the love of not one but two beautiful and cultured women is pushing suspension of disbelief to the breaking.

Meanwhile, Lotus Flower has given birth to a baby boy. The child grows but Allen does not send word and he does not return. In order to give her child a father and quell the gossip, Lotus Flower forges letters from Allen proclaiming his love and intention to return. One day, she receives word that Allen has finally come back to China.

Lotus Flower is thrilled but the audience is told via title card that it was Barbara’s idea to return to Lotus Flower and make amends. That’s right, Allen would have been perfectly satisfied to let his “wife” rot and it is his new bride who insists on settling matters. I am very curious how that conversation went down. I hope a rolling pin was involved.

So poor Lotus Flower is disappointed again, Allen is all “Sorry you were offended” and everyone in the audience is hoping he will step on a rake or sit on a wire brush. And then things get worse.

(Spoilers here if you have never heard of Madame Butterfly) The ending is particularly infuriating. After having lovely and vibrant Miss Wong fall for a dullard, the movie has her hand her child over to her unfaithful husband and his new wife on the off chance they will take him with them to America. Um, the guy betrayed and discarded Lotus Flower because of her race, who is to say he won’t do the same thing to their biracial kid? He obviously cares more about the opinions of his horrible friends more than anything else. Given the child’s age, his appearance as Barbara’s son will bring on all sorts of gossip. People can count, you know.

(More spoilers) And Barbara seems really cool with this whole “Oh yeah, I kind of had an oopsy” thing. Let’s see, he lured an underage girl with no obvious parents or guardians into a mock marriage and abandoned her to give birth to their child alone. He did not call, write or leave money. I’m not a D.W. Griffith fan by any means but if this had been a Griffith movie, Allen would have been punched out by Richard Barthelmess by now. Given Allen’s nature, one wonders how many more abandoned children from mock marriages Barbara will have to raise. Of course, none of these plot holes are addressed and Lotus Flower obligingly commits suicide. I would have preferred a homicide.

It soon becomes clear that Wong and Technicolor are the only things this film has going for it. The script is a painful riff on Madame Butterfly with all the expected problematic elements, exotifying, etc. Frances Marion was never above outright plagiarism in her scripts but this time it bites her on the rear end. There’s no help from director Chester Franklin either. The symbolism is ham-fisted, to say the least. At one point, Kenneth Harlan pulls all the petals off a rose. Subtle.

The title cards are an agonizing blend of phony Chinese-accented English and “Chinese” written in a typeface better suited to a cheap buffet. Some of them feature beautiful artwork but good lord are the words on them stupid. When they aren’t racist, they’re sexist and subtle they ain’t. Even the 1922 review in the New York Times complained about their lack of finesse. (It also praised Wong, as well it should.)

While The Toll of the Sea features lovely color and a heartfelt performance from Anna May Wong, it is also riddled with racism and sexism. It is to be commended for using an Asian cast but that cast is wasted on a story that is soaked in cultural chauvinism and the Asian actors are essentially used as window dressing. The character of Allen is so despicable that his getting off scot-free is infuriating. Where’s Richard Barthelmess to land a punch on that guy’s kisser?

Is The Toll of the Sea historically important? Yes. Is it enjoyable? Much of it is not.

The restored film was released as part of the out-of-print Treasures from American Film Archives box set. Grab it if it comes up at a good price. I have not viewed the bargain prints that have been released and cannot comment on their quality.

While watching The Toll of the Sea, I was reminded of another film. Something in the back of my mind kept nagging and then I remembered: The Secret of Roan Inish. This charming little family film was first released in 1994 and has been one of my favorites for years. (I just had to see it after an enthusiastic review on Siskel and Ebert, which I watched religiously as a kid.) When talking about family films, it’s easy to imagine bored parents but this movie really lives up to its genre; it does not talk down to its audience and tastefully includes grownup themes. It’s truly something that everyone in the family can enjoy, parents included. 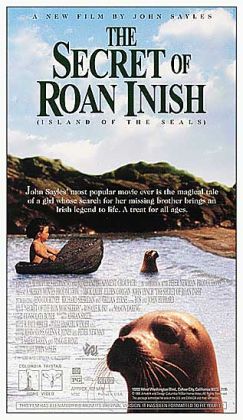 While this isn’t a Silents vs. Talkies feature, I will mention that The Secret of Roan Inish does a far better job of incorporating the theme of the ocean as a large living entity that controls the lives of humans.

It’s the tale of Fiona Coneely (Jeni Courtney), a small Irish girl whose fishing family moved inland during a wartime evacuation. The child is doing poorly in the city and so she is sent to live with her grandparents, the last of their family living by the ocean. Everyone used to live on the island of Roan Inish but they abandoned the place and have not returned since.

As the story unravels, we learn several fascinating details about the family. It seems that there is a rumor that one of their ancestors took a selkie—half-woman and half-seal—as a wife. The Coneely family is fair but every generation has one dark-eyed child, perhaps with stronger selkie blood.

Fiona’s youngest brother, Jamie, was the dark one in her generation but he was lost when his cradle was washed away by the ocean. Fiona comes to believe that the sea is angry at the Coneelys for abandoning Roan Inish and that it will only return him if they return to the island. But who will listen to a small child with a strong imagination who has been listening to tall tales?

The Secret of Roan Inish is a delightful film full of period detail, traditional music and charming performances from the cast, young and old. It also does an amazing job of establishing the ocean itself as a character. It is definitely worth tracking down.

Availability: Released on DVD and via streaming.