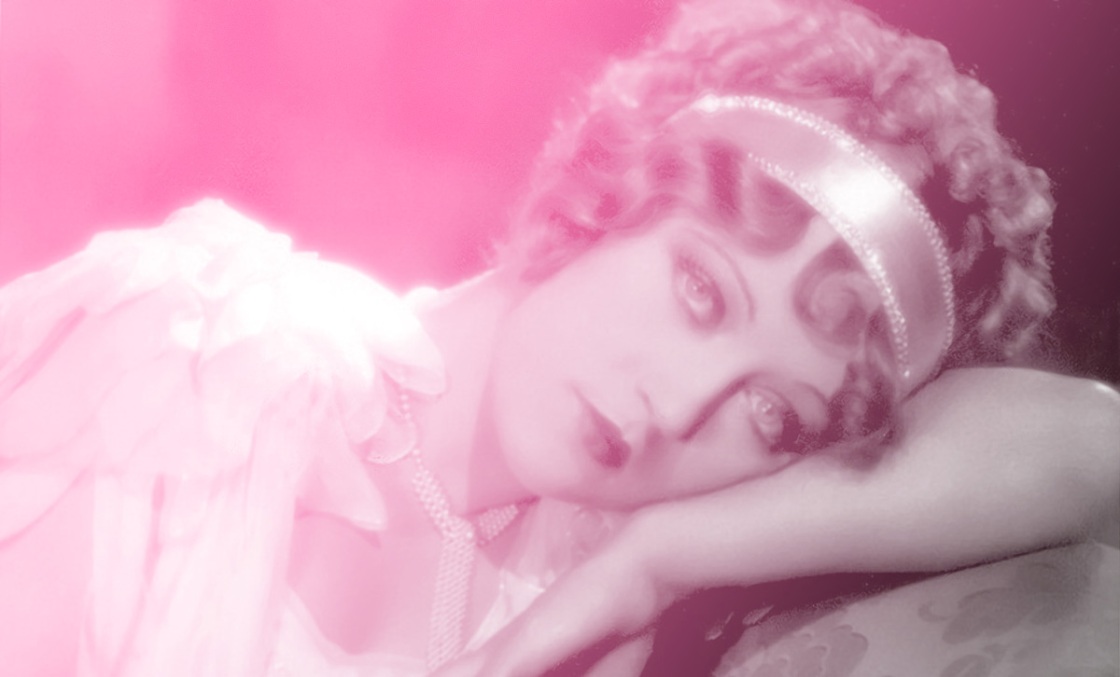 Welcome back! I am cooking my way through the 1929 Photoplay cookbook (recipes of the stars!) and you are invited to tag along. (I have listed all the recipes I have tested on this dedicated page. Check back often.) Today, we will be testing a recipe from one of the most sparkling personalities of the silent era.

A myth that dogged Marion Davies for years was that she was a talentless gold digger who used her relationship with William Randolph Hearst to get into the movies. The classic Citizen Kane, loosely based on Hearst’s life, bears much of the blame.

Lately, Davies has been enjoying a revival and her reputation as one of the finest comics of the silent era continues to grow. What happened? Simple. Her movies started to be shown on TV and released on DVD. To see Davies in action is a treat and it’s hard not to love her. Why would you even try? She’s adorable!

Davies’ talent lay in her expressive face, her gift for mimicry and her witty, self-depreciating sense of humor. She was the life of the party and her best movies are the ones that let Marion be Marion. (If you’ve never seen her in action, check out the backstage comedy Show People. You will be charmed.)

So, Marion Davies is once again a beloved movies star. But how is she at making little hors d’oeuvres? That’s what we are about to discover!

Davies’ recipe is for cheese patties, “patties” being defined as “a small pie” and not the more modern notion of a flat cake of chopped meat. Here’s the recipe: 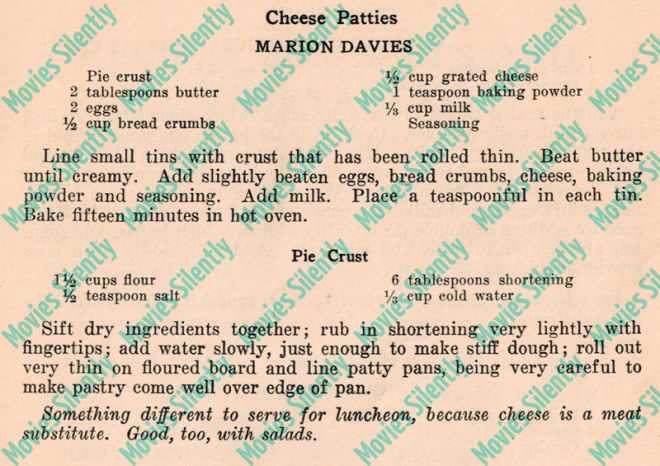 As you can see, Miss Davies has taken the shortening side in the Shortening vs. Butter Pie Crust Debate. I am emphatically Team Butter. Because of this and because I am basically a lazy person, I opted to use pre-made pie crust for this experiment. No butter, no point.

I didn’t have any tins that accommodated a mere teaspoon of batter so I had to improvise. I greased a cupcake pan and lined it with circles of the dough. I had to be careful to place the dough dead center over the cupcake shape or it turned out lopsided and the dough would crease too much on one side. These patties ended up taking about two tablespoons of filling.

The filling is not attractive in batter form. In fact, it looks downright repulsive. The recipe instructed me to include “seasoning” so I opted for classic salt and pepper with a hint of nutmeg just to keep things interesting. I love nutmeg in savory recipes and this seemed to be an ideal one for it.

The tin filled, I popped it into the oven. The recipe helpfully says a “hot oven” so I opted for 350-degrees, preheated. It seemed to work out fine.

I was very impressed when I removed the patties from the oven. Aren’t they little beauties?

But how did they taste? Here is the video:

In a word, disappointing.

Score: 2 out of 5. The patties are gorgeous but they simply do not have that much flavor. The bread crumbs are the culprit. They take up a lot of space but don’t provide any taste benefits. Plus, double-carbing is often a path to blandness in cooking.

The patties also had an odd texture. They were like little muffins inside crusts. I was hopping for something a little more pudding or quiche-like. Instead, the filling was just too bready.

Can it be improved? I think if the filling had eliminated the breadcrumbs and gone for a mini quiche thing, it could have been much better. Also, something like onions or mushrooms or bacon would have added texture and flavor to the patties and made them much more tasty. Another option would have been to snip in a selection of fresh herbs. I am thinking dill but then again I am always thinking dill. Dill is the best!

Make this instead: Spinach and Mushroom Mini Quiches.