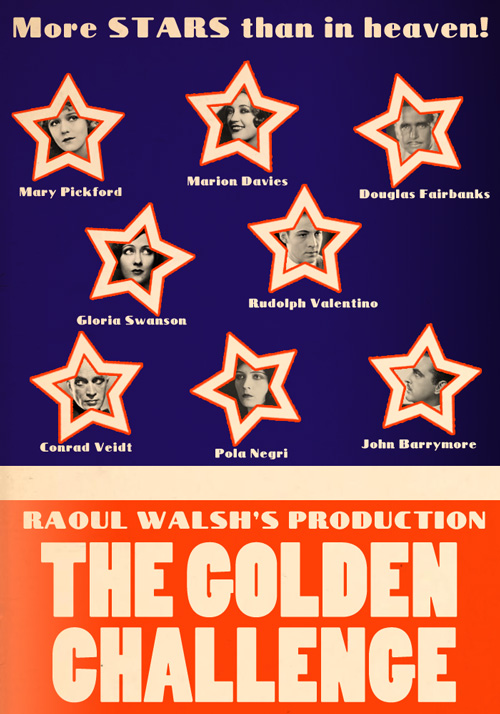 You know that I love silent films. What you may not know, though, is that I have an enormous weakness for the BIG films of the sixties. Lawrence of Arabia, Zulu, you know the kind. I also love those big, big comedies that seemed to star everyone in the entire world. The Great Race, It’s a Mad, Mad, Mad, Mad World, etc.

Well, the concept behind this imaginary film is that one of those “starring everyone” adventure comedies was made in the silent era. An eccentric millionaire decided to finance a film and money was no object. The finest of everything, from stars to sets to Technicolor sequences. This millionaire wanted stars and the stars came, the biggest in the business. The whole thing was fourteen reels long and cost $3 to get in. It was the biggest film of the decade.

The Plot: The richest man in the world, Jabez Watertoast, passes away without heirs. Instead, he has left an eccentric will: He has buried the majority of his fortune (in emeralds and gold) in a secret place and has left clues as to its location. Four copies of the clues have been sent to four different married couples, all in desperate need of money. These couples must use their resourcefulness to find the treasure. Watertoast wanted his money to go to a bootstrapping pair of go-getters and this race is his way of finding the most worthy recipient.

So, four letters are sent out with strict instructions that the participants tell no one (especially the press!) about their mission.

You have been selected as a possible recipient of the Watertoast emeralds. Your first instructions are included in this envelope. You will be given an allowance of $50.00 a week to cover your expenses but no more. If you tell anyone about this contest (especially the newspapers) you will be disqualified.

Note: I created a GIF for every main character but if you have a slow internet connection, they may not animated properly. If a GIF seems to be frozen, simply click it and you should be able to see it move.

The Sheffields were raised in an orphanage together. They grew up, got married and were able to buy the place with the proceeds from Ned’s wingwalking prize money and Amy’s secret gooseberry pie recipe. However, money is tight and an evil banker (who knows there is oil under the place) may take over if they don’t get enough cash to pay off their debts.

Henri is the heir to the throne of Carolingia, which was impoverished by the Great War. Accompanied by his American wife, Sylvia, Henri hopes to raise enough money to strengthen his army so that his country will not fall to anarchists. A former manicurist to the rich and powerful, Sylvia plans to use her business contacts to try to help her husband.

A pair of itinerant entertainers and semi-con artists, Robert and Phoebe are a comedy/illusion duo who pass themselves off as Russian refugees. However, when performing for a gangland audience, they made the dog of the boss’s moll disappear. The problem? It never reappeared. Running for their lives, they want enough money to start a new life far, far away from Chicago.

Erik and Velma were born into money but have long since spent it. However, they do have one advantage: Velma’s uncle was Jabez Watertoast’s lawyer and he means for his niece to win the money. Erik, meanwhile, is using his shadowy connections to try to trip up the competition. He was a spy during the war, you see, and has connections with the anarchist movement.

The four couples only have the first clue to work with. One clue leads to another and so forth as they race across the world at breakneck speed. On the way, they are met with numerous stars in cameos and character actors. But who will win the big prize?

Clara Bow as one of the older, spunky orphans

Charlie Chaplin as himself, a helpful passerby in Paris

Dorothy Gish as a cab driver in Budapest

Nita Naldi as a tribal chieftainess

William S. Hart as a displaced cowboy in Morocco

Norma Talmadge as the scorekeeper for the treasure hunt

Ben Turpin as a foreign legionnaire

The race will start in New York and then head to Arizona (a little tip of the hat to The Great Race there). From there, the race heads to London, Paris, Budapest, Moscow, Hong Kong and then all the way back to Morocco. The treasure is hidden in the desert and guarded by a fierce tribe of warriors.

And who wins the prize? I’m leaving that up to your imagination.